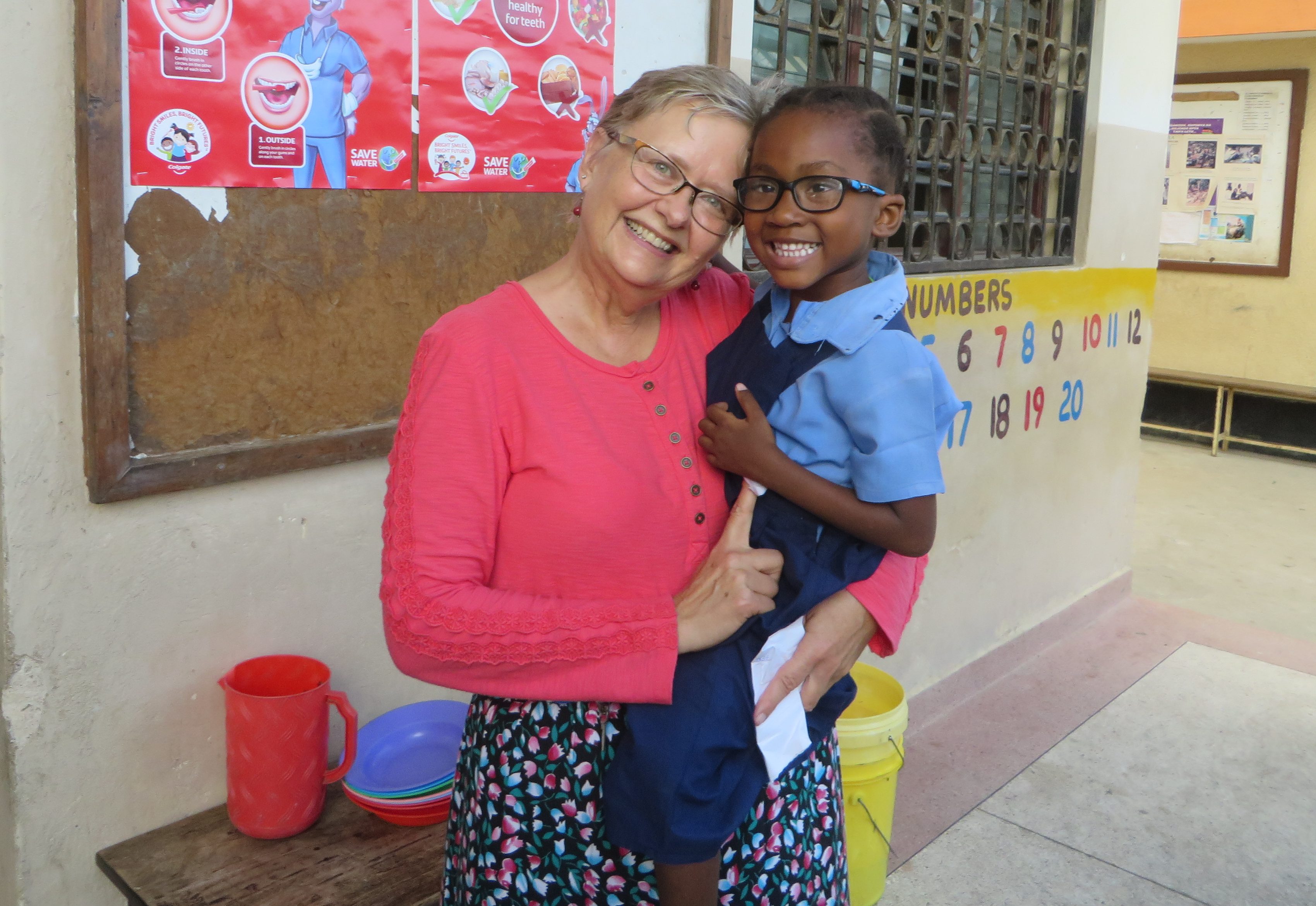 Retiring to Africa as a missionary? That is not something I had planned on, at least not consciously, but looking back, I see how the jigsaw pieces of my life fell into place for that to happen.

Growing up in a Catholic family in Stevens Point, I was raised to know, love and serve God. My parents worked hard to pass on their Faith to me and my older brother, Alfred. After high school, he went on to become a Salesian Brother. For me, discerning my vocation was not easy. I didn’t know what I wanted to do, but I yearned for adventure. After high school, I joined the Navy, wanting intelligence, drafting or lithography; instead, I got orders to Hospital Corps School! Obviously God had other plans. Most of my enlistment was spent at the Naval Hospital and Air Station on Guam. I was getting an adventure and I loved being a corpsman!

After four years, I felt something else tugging at me. I remember looking at newsletters my mother received from various religious organizations. She supported many of them with the little she could afford. I was especially intrigued by the children at St. Joseph’s Indian School in Chamberlain, S.D. Even as a child, I had wanted to help them. When my Navy days were winding down, I wrote them a letter. Did they need me? “Yes!” So after my discharge, I headed to South Dakota.

Working at the Indian boarding school was my first volunteer experience. The faces of the children I cared for in the infirmary were just like the pictures I had seen. I vividly remember caring for one particular girl. After giving her medication and putting her in a bathtub of cool water, I thought, “This is what I want to do with my life.” Not being a licensed nurse, I was very limited in what I was allowed to do. I loved being there, but when the children began their summer break, I decided to return to Stevens Point and pursue college.

I knew I wanted a Catholic focus and applied to the nursing program at Viterbo College in La Crosse. While there, I volunteered with hospice, adopted a grandparent and was active in Campus Ministry. I was young and full of energy. As graduation neared, I thought about mission work and, for some unexplainable reason, Africa was at the top of my list.

The Maryknoll magazines in our home were filled with stories and pictures of missioners serving in all parts of the world. After applying, Maryknoll told me they needed a nurse in Tanzania, Africa!! I was so excited—and absolutely terrified! Is this really what I was being called to do? My relationship with God had been up and down and suddenly I was very apprehensive about this missionary vocation. Was I just looking for another adventure or was this really where I was being called to serve? When I prayed, I was not hearing an answer.

I was expected in Ossining, N.Y., (headquarters for the Maryknoll Lay Mission Program mklm.org) for a personal interview. The night before, my mind was in constant turmoil. Did God really want me to do this? Should I get some nursing experience first? What if something happens to my mom and dad, now in their 70s, while I’m gone? I prayed and questioned God like never before. By morning, I had made my decision. I was not going. After calling Maryknoll and telling them my decision, my parents seemed relieved and I was at peace. But, the Maryknoll Mission seed had been planted. Little did I know that, 33 years later, the little seed would sprout.

Despite all the challenges and the things I miss, I am unexplainably content here. I am at peace with my mission vocation that took 33 years.”

Graduating during the mid-1980s was tough. Many hospitals were not hiring. However, the VA Medical Center in Tomah kept calling me—I was a veteran and a female. I was a top priority for being hired and I agreed. I loved my VA nursing career! It wasn’t the type of job I had originally hoped for, but I had the wonderful and rewarding opportunity to care for my fellow veterans. I even managed to get my master’s degree in gerontology.

I went on two short mission trips to Haiti and finally got to Africa through the Global Partners Program at Gundersen Health Care in La Crosse as part of a surgical team! I came back wishing the trip had been longer. I wanted to get to know the people and culture and to develop relationships. The thought of long-term mission service was already growing.

Retirement after more than 32 years of federal service was quite nice—morning walks, coffee with friends, canoeing, fishing, bicycling. I continued to talk about long-term mission work but took no action, I thought I might be too old. One day, a dear friend said, “You know, you are not getting any younger. If this is something you want to do, don’t you think you should do it?” Well, those words hit me like a brick!

I went home, looked up the Maryknoll Lay Mission website, filled out the application and hit “submit.” Again, I flooded heaven with prayers. Is this really what I am being called to do? Why can’t I be happy with my nice, comfortable retirement? Am I too old? Where will I be sent? What will I do? Will I be safe? Can I learn a new language? Once again, I was not hearing any answers.

Maryknoll called me for a personal interview in New York. This time I didn’t change my mind! Finally, after several weeks, I got the call. Maryknoll agreed.After 33 years, everything was falling into place. Once I knew that I had been accepted, the apprehension, doubt and fear were lessened. This was exactly what God wanted me to do at this time in my life.

I am currently serving in Mombasa, Kenya, a city of almost 1 million people. There is a huge gap between the very rich and the very poor. My ministry is at St. Patrick’s Dispensary (medical clinic) in a slum known as Bangla, which is comprised of a few thousand people living well below the poverty level. Most live in one-room houses with mud walls, metal roofs and dirt floors and struggle from day to day, often finding it difficult to provide even one meal per day for their family. Alcohol, drug abuse, HIV/AIDS, tuberculosis and other infectious diseases are very common.

Unemployment is high. St. Patrick’s Dispensary is the only clinic providing quality health care in the Bangla slum. We offer consultations by a physician assistant, immunizations for babies, lab services, medications, HIV counseling, health education and a food program. Being a Faith-based facility, we receive no government funding, but instead rely on the minimal income we receive from those who are able to pay, and from donors. Trying to pay the bills is a continual challenge, but God keeps providing!

I do miss the comforts of home. I would like to go out in the evenings, but even though I do not live in the slum, it is not safe to go out after dark. I miss the independence of having a car. I ride the hot, crowded matatus, where they charge me too much because I am white. I miss the security of America. Here, we live under the constant threat of terrorism from Al-Shabab in our neighbor country of Somalia. Our churches, schools, government buildings are all walled in and gated with 24-hour security. My bags are searched and a female guard checks me with her wand every time I go into a grocery store. What I miss most are the people I have left behind—my brother, my relatives and many dear friends. The memories of meeting for breakfast, going fishing, sharing a bottle of wine or bicycling over the rural hills all bring me comfort. Despite all the challenges and the things I miss, I am inexplicably content here. I am at peace with my mission vocation that took 33 years. When God’s plan changes for me, He will let me know. He always does. For now, this is exactly where He wants me to be.