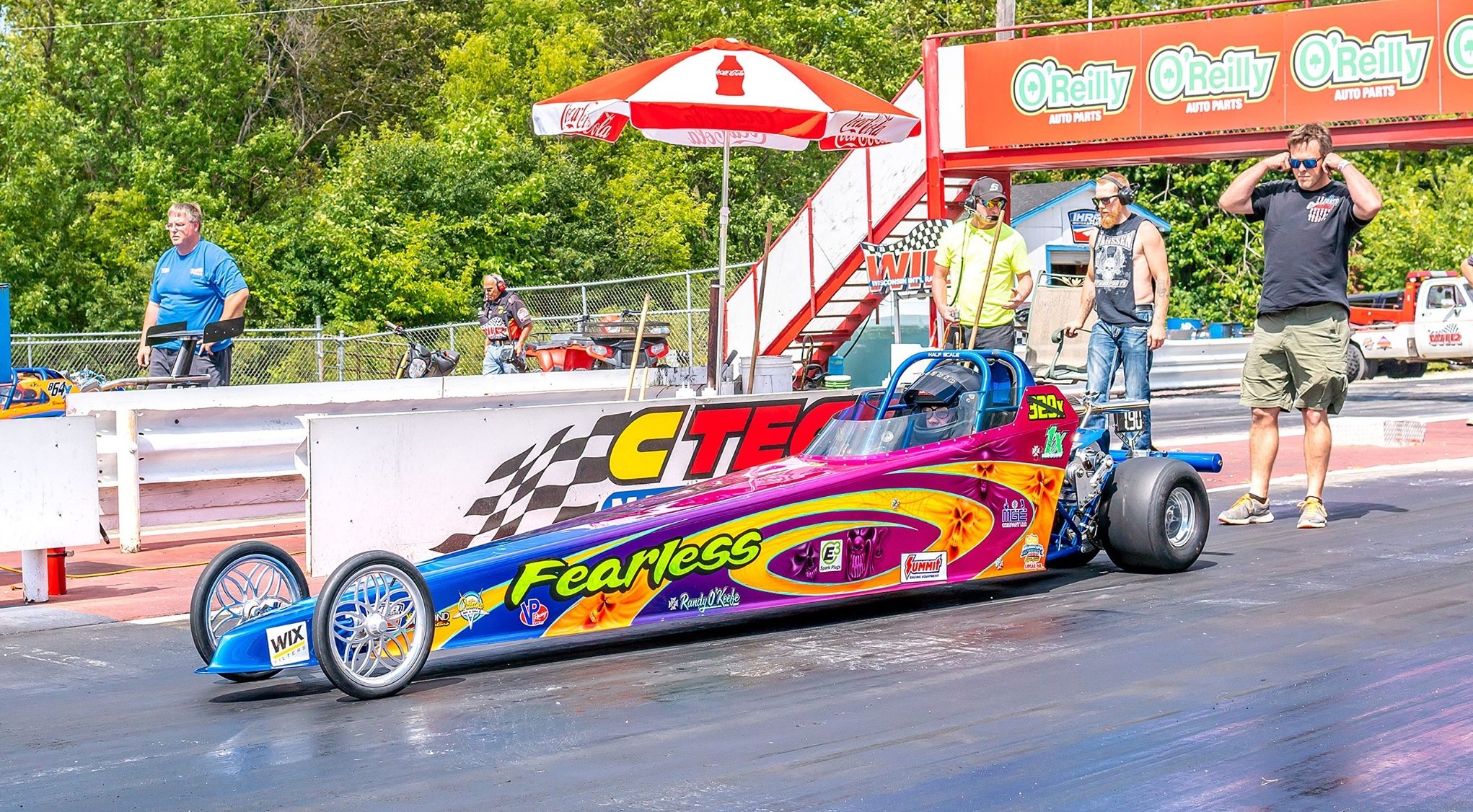 Fifteen-year-old Kyla Feit lives in small-town Wisconsin Rapids. A member of St. Vincent de Paul Parish and sophomore at Lincoln High School, Kyla spends many evenings during the school year honing her skills in the dance studio. A dancer since age 3, she dances ballet, pointe, tap, jazz and modern. But if you ask Kyla her other passion, you may be surprised to hear “drag racing.” “It is a complete 180 from dance,” she admits, and part of the sport’s appeal to her is that it is something different than the average kid her age is doing.

Drag racing is a family affair for the Feits. It is an activity that brings her immediate family (dad Chris; mom Jennifer; and younger sister Faith) together during the long April-October racing season to support Kyla on the track. Other relatives and friends come to cheer her on at races as well, with her home tracks being the Great Lakes Dragaway in Union Grove and the Wisconsin International Raceway in Kaukauna.

Both sets of Kyla’s grandparents, in particular, have shaped her path through their generosity and encouragement within her racing career. Kyla attributes her paternal grandparents, Randy and LuAnn O’Keefe, with getting her started racing. Her Grandpa Randy has been drag racing with his brothers for most of his life and continues his racing career, often racing at the same track as his granddaughter. He bought Kyla’s first junior dragster for her even before she was born, hoping one day she would join him in the sport. She was asked throughout her childhood if she wanted to race, but it wasn’t until she was 10 that she chose to give it a try. She’s been hooked ever since.

“[Kyla] is a competitive kid, her dad explained in a USA Today article from December 2018. Since she began, her progress has been steady. She has been learning more about the craft and car, and is even perfecting reaction times with a light tree in her bedroom. Over the past five years, she has become more involved in the preparation of her car—changing oil, checking tire pressure, weighing in.

The day of the race she recalls how “unbelievably calm” it was. She worked to keep herself in the moment by talking to her family and friends in between races and not dwelling on the pressure. She raced seven rounds that day, with the intensity growing at each elimination until, she says, “I didn’t even realize I was in the finals until I looked around and I was one of the two cars in the staging lanes.” Her competition red-lighted and she became the Junior World Champion, earning the title, prize money and a new dragster.

“I’m really proud of her and hope she keeps going,” said her Grandpa O’Keefe in USA Today. “She’s only been at this for four or five years and she’s at the top. Kyla beat people from all over the world.”

Kyla’s maternal grandparents, Mike and Judy Ashbeck, of Holy Rosary Parish in Sigel have also been supporters of their granddaughter. They have been examples of Faith and prayer to their grandchildren and have involved Kyla in helping set up and working for the Holy Rosary Parish picnic. One of Kyla’s most treasured possessions is a gift from them—a blessed St. Christopher medal, which she carries into each race, praying for the saint’s intersession and protection in each run down the track.

St. Christopher is the patron saint of travelers and drivers, so the gift was very fitting. The inspiring story of St. Christopher settles somewhere between legend and legitimacy, man and myth. Born in the third century Asia Minor to a pagan king, Offerus (one of Christopher’s given names meaning outcast) was a restless young man, searching for a purpose and a king worthy of his allegiance. For a time, he even served the devil, but when a criminal cowered at the holy cross, he abandoned Satan and pledged his life to Christ. He was baptized Christopher, meaning “Christ-bearer.”

A massive seven and a half feet tall, St. Christopher found a task for his strength and began transporting travelers across a dangerous river. One day, a small child required transport, but the trip across became unusually slow and arduous with the child on his shoulders. At the end of the crossing, Christopher told the child he felt he had carried the weight of the world, at which time the child identified Himself as Christ and said that Christopher had also been carrying the Creator of it.

Christopher is said to have brought many to Christ. He was beheaded as a martyr in Turkey and continues to be a very popular patron, especially for travelers who often don his medal in their vehicles.

Through St. Christopher’s example, we are all called to be Christ-bearers in our own unique way, through our own unique calling. For Kyla, it is in a thunderous dragster clinging to her patron, in the dance studio practicing poise and footwork, in the classroom undertaking academics and around the dinner table in prayer and good humor.

Kyla plans to keep drag racing in the junior circuit until she ages out at 18. Then she is undecided if she will be able to continue as she hopes to pursue medical school. But for now, she is taking each moment as it comes and enjoying the adventures the Lord has placed in front of her, bearing Christ in her own unique way.