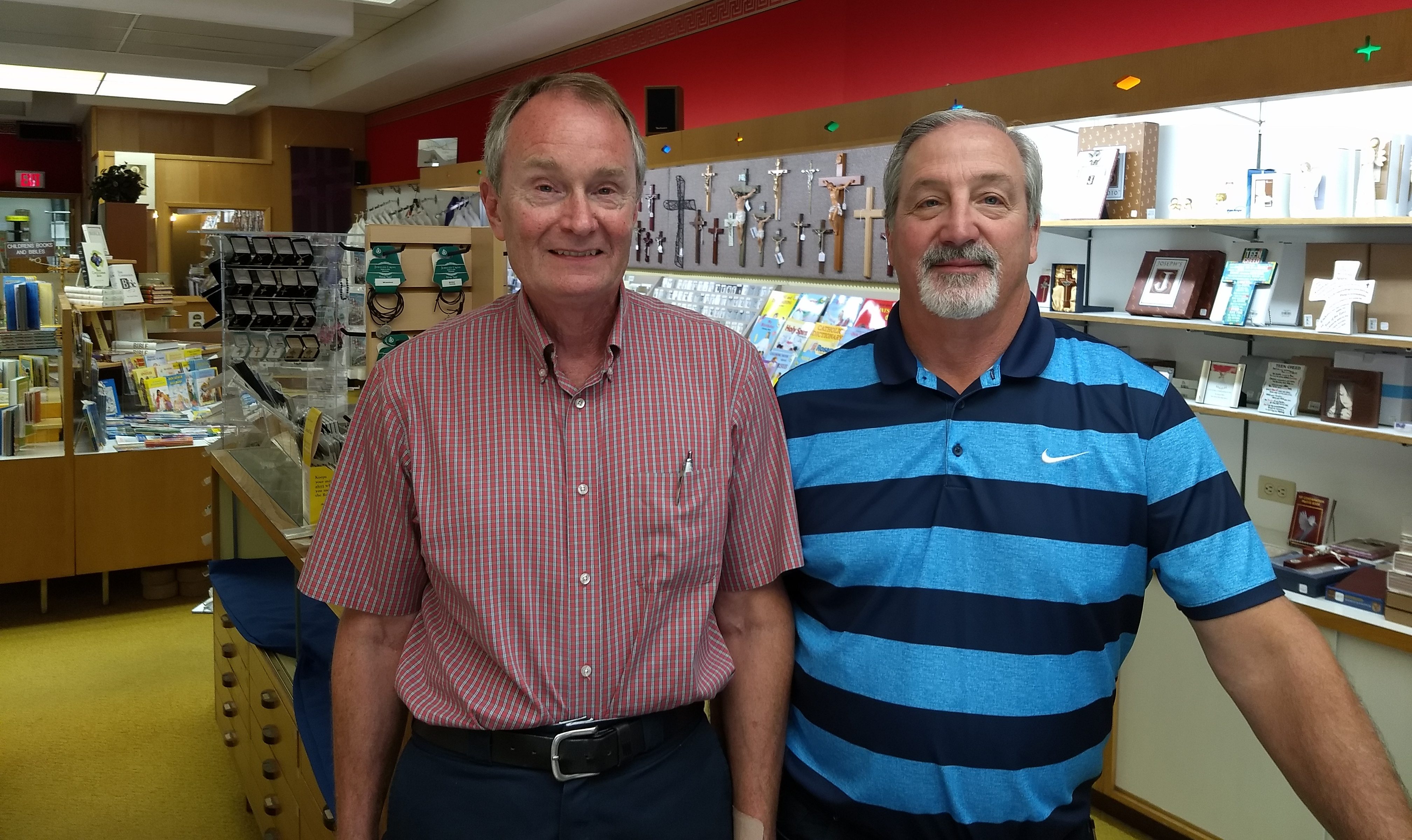 The spire of St. Joseph the Workman Cathedral casts a shadow like a sundial across Main Street in La Crosse. At midday, the shadow of the cross atop the steeple reaches the storefront just opposite the cathedral. The storefront’s display windows are silently touched, like a mother’s hand blessing her child. In winter, when the sun arcs low on the southern horizon, the shadow reaches to the upper stories. Winters past found Nativity scenes there, the Christmas star shining out from the uppermost window and, on the second story, statues of Mary and Joseph poised over our Savior’s crèche, the Holy Family.

Ed Noelke remembers those Nativity scenes better than most because he helped his dad, Ned, set them up. Noelke’s display windows fronted their own family’s apartment above the shop below. Four generations of Noelkes have offered church goods to families and parishes out of their shop opposite the cathedral. It has been Ed’s life and work, the expression of his own and his family’s faithful legacy. In many ways, his work, and theirs, has been an extension of the Church itself. Ed, reflecting back, points to the intimate relationship of his family with the cathedral parish since the company’s founding. “When Berhnhardt started the business, his brother-in-law was rector at the old cathedral. We’ve been serving people here for generations. It’s really nice to see. People 70 and 80 years old come in and remember being here with their parents to choose first Communion gifts. So, its handing down a faith tradition.” Asked where he grounds his Faith, Ed’s reply echoes his life of service, “The Blessed Mother and the rosary are very important to me.”

Ed is 65, plans to retire and has no heirs. To continue service to the Church in his family’s tradition, he’s been working with another family with similar values. Joe Stemper and four of his brothers are third-generation proprietors of the T. H. Stemper Company, Inc. in Milwaukee. The company was established in 1911 by Thomas H. Stemper, their grandfather, and has grown in Faith and service to become one of the largest church goods suppliers in the country. Their vocation, paralleling the Noelkes’, has had a different focus and emphasis, but the same purpose. Joe says, “We’re in it every day. This is our life. We grew up with it. It’s second nature. As soon as we could drive, we were out delivering candles to churches. My father died of a heart attack at age 52. I was 18. My mom had to run the business. I was given a church directory and told, ‘Go out and get the business back.’ So I did. Over time, you develop a relationship with the clergy and their staff. It’s something we take very seriously.”

But you are “a chosen race, a royal priesthood, a holy nation, a people of His own, so that you may announce the praises” of Him who called you out of darkness into His wonderful light.
1 Peter 2:9

Noelke’s business was founded opposite the cathedral, in La Crosse; the Stempers built their business in Milwaukee and on the road. Joe and two of his brothers drive more than 60,000 miles per year visiting churches and delivering church supplies. Joe travels a circuit that includes Wausau, Wisconsin Rapids, Eau Claire and now La Crosse. His immediate goal, and that of all the Stemper brothers, is to assume the relationships once tended by the Noelkes. Another Stemper goal is to engage the future.

“My daughter is our fourth generation” says Joe. “Rachel’s 23 and trying to help us figure out how to use social media. Young priests, young clergy, are online. We’ve invested and the churches have invested in social media. That’s where young people are now.” Joe and the Stemper brothers, like many clergy and parishes, think good social media may help preserve Church traditions of beauty and dignity. The Stempers are working to keep the Church at the center of people’s lives by meeting them where they are, including online.

Ed and Joe each found their vocation early, each of them embracing their respective family’s mantle of service and making it their own. In the coming months, as the cathedral’s shadow lengthens towards Noelke’s, it marks not only the hours, days and season, but also the transition of these families. They serve the rich and beautiful tradition of first Communion gifts for generations. They deliver church goods that mark us as a chosen race, a royal priesthood, a holy nation, a people of His own. Their quiet work lifts up the bright star above the Nativity scene at Christmas. Ed and Joe, in their quiet work and example, announce the praises of Him who called you out of darkness into His wonderful light.