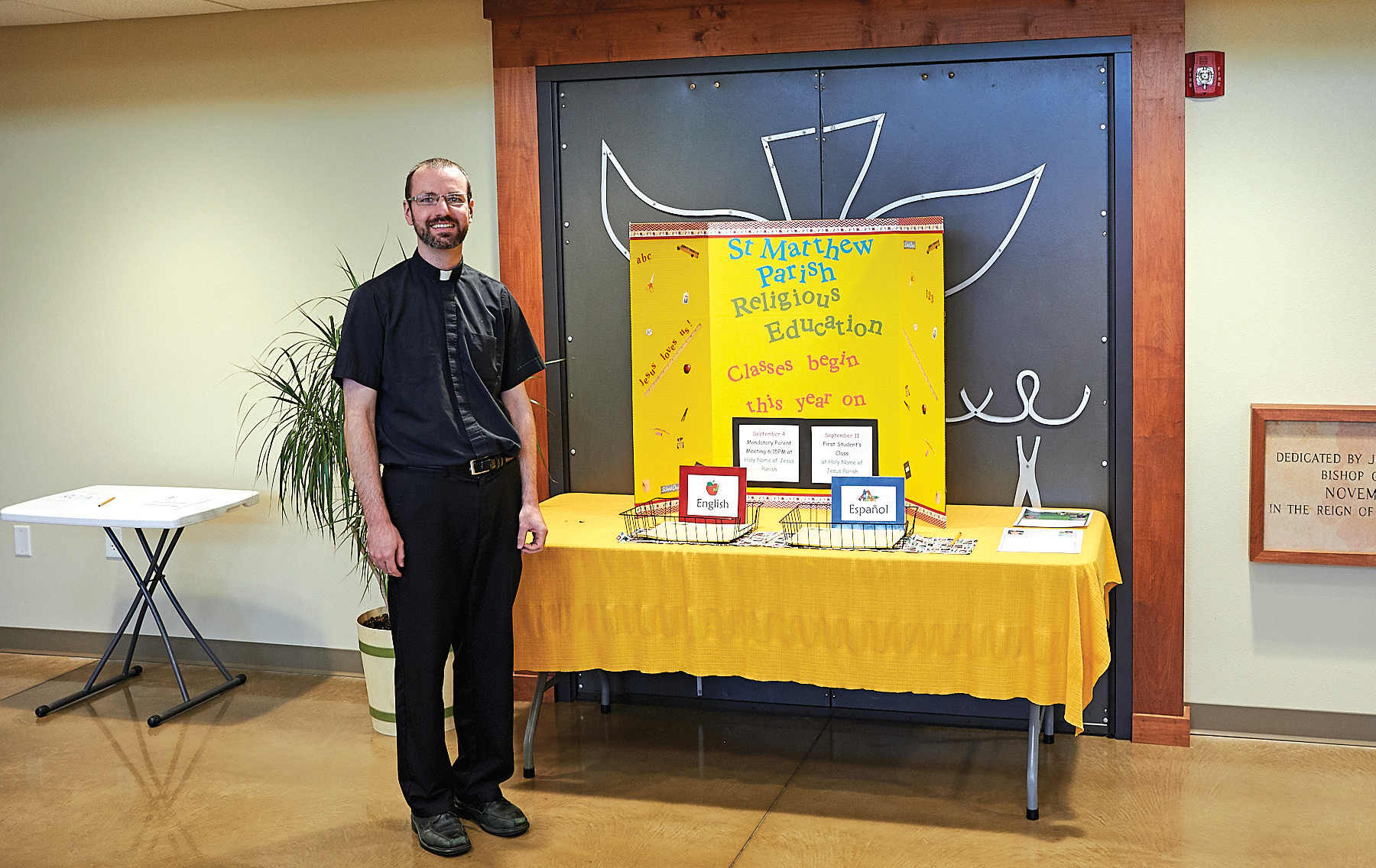 “When priests are ordained, they promise to pray for their people. I realize that I am a priest because God wants me to be a priest. God calls men to be priests very intentionally because there is work that God wants done. With this in mind, having prayer as a consistent part of my day is really important.” – Father Peter Kieffer

Father Kieffer was ordained two years ago and was named by Bishop Callahan as associate pastor of Holy Name and St. Matthew parishes and chaplain of Newman Catholic Middle School in Wausau. However, Father Kieffer’s journey to priesthood began many years ago and involved many steps along the way.

How does a man become a Catholic priest? What promptings will cause action? It often begins with a thought, an idea, a sense that God may be calling him to this vocation. For Father Kieffer, his inkling came as a sophomore at Aquinas High School. “My religion teacher at that time was teaching us about the different sacraments. When she got to the Sacrament of Holy Orders, something just stood out to me. It felt like something was nudging me a little bit. This was the first time I started to think about priesthood a little bit, but I wasn’t, at that time, thinking I would be a priest,” recalls Father Kieffer.

A man often makes his desires known to his parish pastor, who then makes a recommendation to the diocesan vocation director. Other times, a parish pastor will start a conversation with a young man of the parish. Father Kieffer’s high school chaplain, Father Sam Martin, came up to him in the high school cafeteria and asked him if he would be interested in attending a “come and see” weekend at the House of Formation. This is a program to help young men in the discernment of their vocation, with an emphasis on the priesthood. Father Kieffer says, “I remember thinking: ‘Oh my gosh! If I go to this program, I will become a priest.’ But looking back, I think I over-dramatized it a bit. I did not go. However, just his invitation and the experience I had in the religion class got me to thinking about the priesthood a little more.”

The priestly formation process takes place over several years and is tailored specifically to the candidate. It consists of a continuing conversion of heart, mind and soul that enables a man to carry out an effective ministry in the service of God and His people as an ordained priest of Jesus Christ. “When I meet with the man, I am looking for good moral character,” said the director of vocations for the Diocese of La Crosse, Father Alan Wierzba. “I am looking for maturity, emotional balance and that he is healthy: physically, mentally and spiritually.”

Father Kieffer’s prompting came when he was in college pursuing a religious education degree.

“As I remember,” he reflects, “I really became interested in my philosophy classes, so in hindsight, I now can see God working in my life because seminarians need to study philosophy before studying theology.”

While at college, Father Kieffer met Father Jim Steffes, a former seminary rector and also a graduate of Aquinas High School. There was an instant connection between the two men. “We talked for a while and he asked me if I’d ever thought about the priesthood before. I said that I had, but at the time I didn’t think that’s what the Lord was calling me to do. He looked at me and said, ‘You know you’d make a really good priest or a religious brother. There is something about you that makes me say that.’ I remember going to class the next morning and I wasn’t really paying attention because this was like a paradigm-shifting moment in your life. I also reflected on how I passed on the invitation to the House of Formation program earlier and here the Lord is giving me another chance and I did not want to miss this opportunity.”

How does a man become a Catholic priest? What promptings will cause action? It often begins with a thought, an idea, a sense that God may be calling him to this vocation.

Many people work together as a man progresses and discerns. “We want to make sure that this is a serious call,” says Father Wierzba. “We don’t want to rush anything because this is a big decision [on the part of both the candidate and the diocese]. Our goal is to have well-formed, healthy, holy, balanced, joyful priests,” he stresses.

Following about a year of spiritual discernment, the candidate enters a new, year-long diocesan program called Journey prior to formally entering a seminary, which furthers the discernment process. Journey includes nine months in residence at the Diocesan Center in La Crosse, where candidates study Scripture and the catechism, do apostolic work, develop their social skills and support themselves with part-time jobs. All the while, candidates are being evaluated for their suitability for entering the seminary. Father Wierzba recommends admission to the seminary to an eight-member admissions board consisting of clergy and lay people, which then makes a recommendation to Bishop Callahan, who makes the final decision to admit the candidate to the seminary.

Once at the seminary, the seminarian spends four years majoring in philosophy. It was around Christmas in 2009 that Father Kieffer called Monsignor Hirsch and said, “I think the Lord wants me to go to the seminary.” Father Kieffer applied to the Diocese of La Crosse and was accepted spring 2010. He entered Immaculate Heart of Mary Seminary and continued his studies at St. Mary’s University, graduating with a degree in philosophy.

Father Kieffer finds joy in his ministry because of his experience helping people in the community find God in their lives in very concrete ways… In so doing, he continues to grow in his own humanity and relationship with God.

Upon graduation, it is four more years of studying theology at a university. Father Kieffer attended the Pontifical North American College in Rome in 2012 and studied theology at the Pontifical University of the Holy Cross. He remained there for two years, after which Bishop Callahan and Father Wierzba suggested he should take a year off from his studies to do pastoral work. This year is now called Regency; it is time and space to heal the man’s identity as a beloved son of God. Father Kieffer agreed and returned to the U.S. and began his pastoral ministry at St. Mary Parish in Marathon. “I spent a year with Monsignor Joseph Diermeier, and it was such a positive experience for me … I just grew and blossomed there.”

After completing his pastoral ministry at St. Mary Parish, Father Kieffer wanted to remain in the U.S. to continue his seminary studies and discussed his desire with Father Wierzba and Bishop Callahan. Subsequently, he transferred to St. Francis de Sales Seminary in Milwaukee. There, he continued to grow in confidence and leadership. “The last two years [at the seminary] were a very positive experience.”

Along the way, there is a background check, Safe Environment training and ongoing psychological evaluations. Seminarians hear Father Wierzba stress repeatedly, “I want you to do what God wants you to do.” Furthermore, he says “I don’t push them, I don’t give them a hard sell. Discernment is a process that takes time and each man responds at his own pace.”

Father Kieffer was ordained a priest in 2017, but his formation process, now as a priest, continues. The vicar for clergy, Monsignor David Kunz, helps Bishop Callahan provide support and guidance to priests and deacons. “My role actually begins about four to five months prior to ordination, when I receive the seminarian’s final evaluation. I then meet with the seminarian and his formation adviser to discuss transitioning into the priesthood. I ask them what gifts they bring to the priesthood in the Diocese of La Crosse, as well as areas they think they need extra help with,” says Monsignor Kunz.

Newly ordained priests can expect to have two assignments as associate pastors, each lasting two to three years, before they are asked to assume a pastorship. It is during this time that the new priest finds out how to effectively administer a parish, with all its intricacies, like attending parish council and other meetings, managing human resources, handling finances and so forth. “I actually ask them to run the parish council meeting for a half year to hone their leadership skills,” says Monsignor Kunz.

The diocese has put several programs in place to help newly ordained priests succeed as future pastors. Monsignor Kunz points to a diocesan leadership development program that consists of seven meetings held over the course of a year. He also coordinates a program that meets quarterly at the Holy Cross Diocesan Center where “junior priests” enjoy dinner, prayer and socializing. “These programs are designed to prepare new priests for their important role in parishes so they are not overwhelmed by their many responsibilities,” says Monsignor Kunz.

Moreover, Monsignor Kunz emphasizes the important role international priests play in the diocese. They buy us time for our new priests to gain experience in being an effective pastor of a parish. In the past, there was a lack of men entering the priesthood, which is the reason for the shortage we see now. “I don’t want a new priest to be overwhelmed by the responsibilities of suddenly being thrust into the position of being a pastor,” he says. Fortunately, there has been an increase in the number of men entering the priesthood.

Father Kieffer finds joy in his ministry because of his experience helping people in the community find God in their lives in very concrete ways, whether it is putting his knowledge of Spanish to work in the Hispanic community, mentoring young people as chaplain of the local middle and high schools or praying with a lady in a nursing home who is dying and does not have a parish in the area. In so doing, he continues to grow in his own humanity and relationship with God.