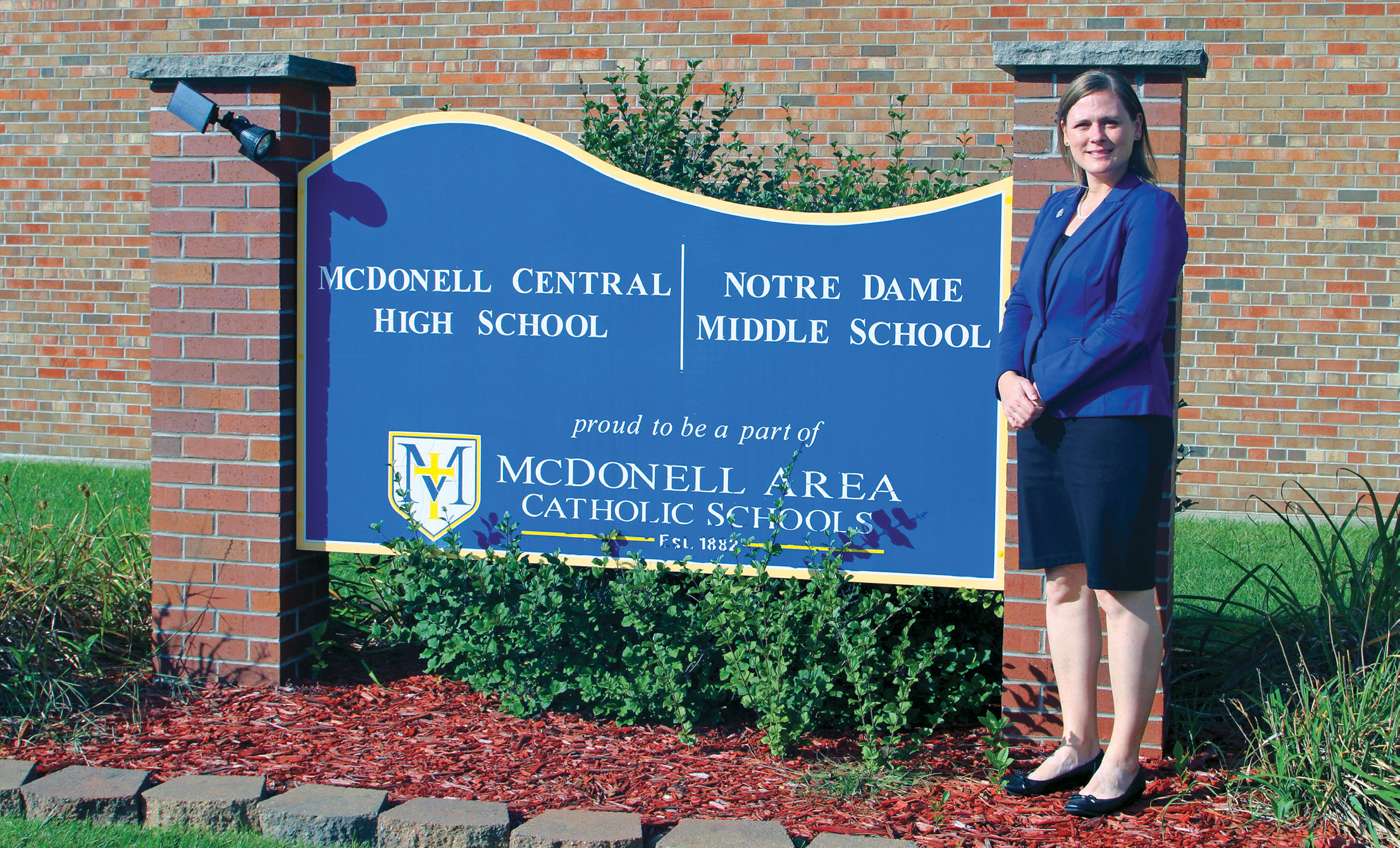 Raised in Chippewa Falls and an alumna of the area’s Catholic schools, Molly Bushman is now the president of McDonell Area Catholic Schools.

Our path in life is deliberate. We aspire to dreams at a young age and, with hard work and determination, strive to reach our goals. Society considers us successful when we accomplish greatness, financial stability and, many times, prestige.

But, how do we respond when God calls us to change our path and redefine success? Do we listen, or do we ignore His calling and stay the course we planned? Molly Bushman recently faced this dilemma. Her response to God is an inspiration to us all.

Molly grew up in Chippewa Falls and was raised in a devout Catholic family. Her parents lived two blocks from Holy Ghost Catholic Church, the parish she and her family continue to belong to today.

The family attended weekly Mass and celebrated feast days and holidays together. Molly and her four siblings took part in many family traditions and lived their Faith. “One of my jobs was to set up the Nativity every Advent. I took a lot of pride in that,” she says.

“Leaving the law firm and partners was hard. But having that conviction in prayer carried me through.”

In 2010, Patrick and Molly decided to relocate to Chippewa Falls, where Molly continued to practice law, raise a family and be active in her community. The Bushman clan includes four children, Jackson, 16, Eva, 14, Elyse, 11 and Jolie, 7, who now attend McDonell Area Catholic Schools.

Life was great! Molly had a fantastic career, a wonderful family and was a respected leader within the community. The dreams she aspired to at a young age were coming true!

Then, God called her name. Her path in life would be forever changed.

Molly distinctly recalls the death of her grandfather in 2016. “His passing ignited a major deepening of my Faith.” With months of prayer and discernment, God’s calling would become clear.

“At that time, I was practicing my Faith. However, I felt that if I really believed, then I needed to devote more time to the Lord. And, the Lord pulled me right in! I experienced a total conversion of my heart.”

In September 2018, Molly was a leader for St. Paul Street Evangelization and attended a retreat asking her to discern, “What is it Lord that you want of me—that I can give back to you?” She was working full-time as a lawyer, an active community volunteer, team leader for evangelization, a wife, a mother and helping her parents. “Through the discernment process, I realized I was doing too much,” she explains.

Shortly thereafter, Molly read the book Discerning the Will of God by Father Timothy Gallagher, OMV.

A few weeks later, Molly learned that Jeff Heinzen, president of McDonell Area Catholic Schools (MACS), was retiring. Her husband told her she should apply for the position. Her reaction was, “Are you nuts? I’m an attorney, not an educator!” But the seed was planted, and God’s calling grew louder.

“My breakthrough was when I realized I didn’t have to decide whether I should take this job. I just had to discern if the Lord wanted me in this job. All I had to do was decide to apply. He would handle the rest,” she says.
Molly offered this in prayer and submitted her application. Three months later, she was offered the position as president of MACS.

“When considering applying for the job, I questioned as to why would MACS want me. I thought, ‘If this is something the Lord is calling me to do, then it’s my obligation to prepare myself.’” So, in December, Molly applied and was accepted into Creighton University’s graduate studies program.
Molly completed the 12-credit, graduate-level courses and received a master certificate in Catholic school leadership in July 2019.

The transition from attorney to president of MACS wasn’t without difficulties. “Leaving the law firm and partners was hard. But having that conviction in prayer carried me through. The dedicated staff and army of volunteers at the school also made the transition easier.”

Molly believes the challenges students face aren’t restricted to Catholic school students. “Cultural and social media abuse apply across the board.” Her goal is to keep improving on what MACS been built on over the past 130 years in Chippewa Falls.

The Central Office at MACS oversees early childhood through high school. The four schools and early childhood have an enrollment of about 500 students. Molly spends time at the different schools every week.

Molly is hopeful about the future of MACS: “If we can proceed with generosity and what the Lord is asking of us and our students, there’s no limit as to the good He can do. I feel passionately that Catholic schools, built on the foundation of Jesus, are the best hope for the future of the Church. I love the Church and I want her to have a bright future. It’s up to all of us to listen to what God is asking us to do.

“Faith isn’t always things we can’t do. It’s a calling to everything God wants us to do. This is our hope and what we take joy in. I take joy in this as being a mother and being able to share this passion. I don’t want our kids to be afraid of the world. They need to be in the world, not of the world.”

Molly continues to have a fantastic career, a wonderful family and is a respected leader within the community. The difference is she’s now doing the will of God and following the path He asks of her.

“I’m totally comfortable with what the Lord wants me to be doing. I’ve never regretted the decision to leave my law practice. This is exactly where I’m supposed to be!”