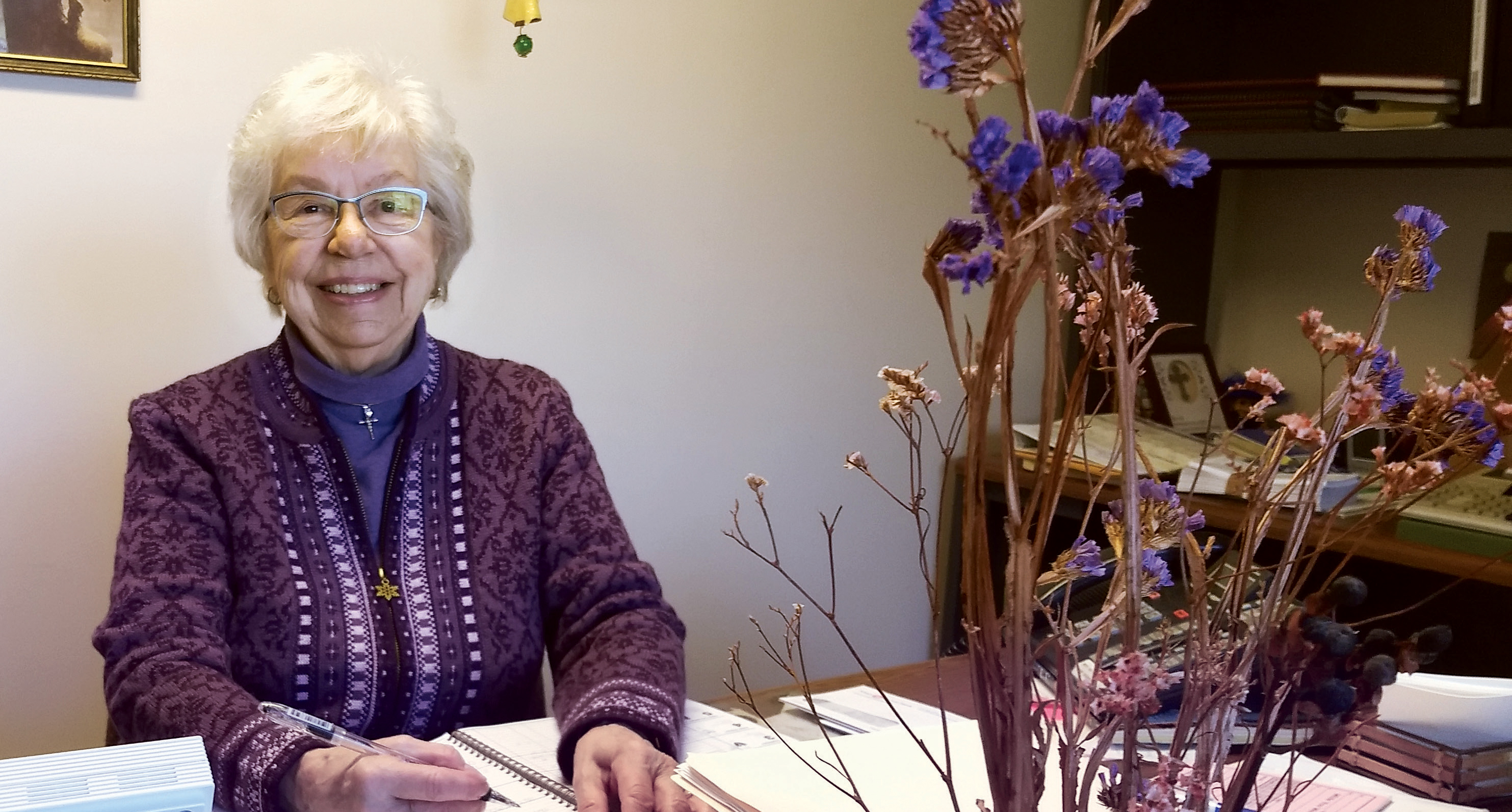 As long as my mind and fingers keep working, I’ll be there!

Ann Graveen, parish secretary at St. Matthew Parish in Wausau, credits the power of prayer for getting her through many difficult times in her 84 years of life.

“When things are going well, you think your Faith is so secure. But how shaken it can be when you face tragedy,” Ann explains. “You think nothing can happen to challenge your Faith. But it can. For me, praying to Jesus strengthened my Faith.”

Ann grew up in Wausau, the youngest of Michael and Pauline Gajewski’s six children. Sadly, her father died of pneumonia when Ann was only 4. “My mother was a strong woman; she endured a lot at a young age,” Ann remembers. “It was tough on me, too. I started school shortly after Dad died, and I remember that I didn’t want to leave my mother, thinking when I got home she wouldn’t be there. But she always was.”

The power of prayer was instilled in Ann at an early age. “There were many times when I’d come home from a football game and found Mom in the living room, praying out of her prayer book. I learned my devotion to prayer from her.”

Ann comes from generations of strong and Faith-filled women. “Grandma and Grandpa—my mother’s parents—came to the United States from Poland when my mother was only 4 years old,” she explains. “Grandma had three children with another one on the way when they came here. She was so homesick for Poland, but Grandpa said the United States was their homeland now.”

Her grandma lived in a little house at the back of their property when Ann was growing up. “Grandma helped my mother a lot when Dad died,” she says.

Ann met her future husband, Willard, in the summer of 1956. “I was in a bar on a date with another boy,” she reminisces. “Willard was with another girl, and the two boys knew each other. They shook hands and then I was introduced to Willard. When he shook my hand, he said, ‘This is love at first sight.’ I thought that he possibly had had too many drinks,” she says with a laugh. Willard and Ann started dating a week later, and on Oct. 5, of the following year, they were married at St. Michael Church in Wausau.

“We, with the grace of God, brought three children into the world: Jay, Keith and Mary Jo,” Ann says. “Actually, we would have had four; however, God took one home during pregnancy.”

Ann was busy raising her family when another tragedy struck her family. In 1963, her sister, Jo, died from cancer when she was only 35 years old. Ann was 28 at the time. “Even though Jo was eight years older than me, we were very close. Losing her was like losing my right arm,” Ann says. “She suffered from cancer for a year, but I had it in my mind that she was going to survive. When she did die, the loss was so difficult for me. But my husband and family, and my Faith, helped me through.”

Ann at the St. Matthew Parish office. “I love the company and the people are wonderful. When you enter St. Matthew’s, you are family. You’re one of us.”

When Ann lost her mother just seven years later, she once again turned to prayer. “I prayed a lot. That’s what saved me. That’s what always helped me get through the difficult times.”

Through the years, Ann and Willard happily saw their children grow and flourish, raising them in their Catholic Faith. “We were charter members of St. Matthew Parish,” Ann says proudly. “All of our children received their sacraments there.” She volunteered in the school library and did various jobs for the religious sisters.

“Later on, when the children were in high school, Father Robert Hundt, who was pastor at the time, asked me if I could type,” Ann says. She told him she used to type many years ago but didn’t know if she still remembered how. “He said to me, ‘Once you learn to type, you can always type,’” she recalls with a laugh. She began working part-time for the parish, typing their weekly bulletin. After that, it grew into doing office work.

In late 1984, Willard was diagnosed with lung cancer. He was 52 years old, the same age as Ann’s own father when he died; Ann was only 48. She left her job at St. Matthew’s to care for her husband. “It was a fast-growing cancer. He was buried on his 53rd birthday,” she remembers sadly.

Once again, she relied on her familial foundation. “When I felt down and said, ‘O Lord, where do I turn,’ I thought of Grandma and Mother, and all that they had endured,” Ann says. “I thought, ‘If they could do it, I can do it, too.’”

Ann readily admits it was hard to lose her husband at such a young age. “I would see other couples our age traveling, and we weren’t ever able to do that. We wouldn’t grow old together.” But she quickly adds that she never had the urge to remarry. “Willard was the love of my life,” she says simply

In June of 1986, Father John Malik, who was pastor at the time, called to ask if she wanted to come back to work. “He called me on a Sunday. I asked when he wanted me to start and he said Monday. So, the next day I went back to work and I’ve been there ever since.”

At the age of 84, when most people are retired, Ann still enjoys working part-time as the parish secretary. “I love the company and the people are wonderful,” she explains. “When you enter St. Matthew’s, you are family. You’re one of us.”

“I’ve worked for some of the most wonderful priests on earth,” she adds. “As long as my mind and fingers keep working, I’ll be there!”

Even though Ann has endured many difficult losses in her life, she says God has continually provided for her. “I thank the Lord for my children, who have always stuck by me, giving me all the support I needed and need to this day,” she says. Ann is also blessed with three grandchildren and two great-grandchildren.

She explains that our Catholic Faith is an invisible gift. “We cannot touch Faith; we cannot feel it or see it. But we know, down deep, that it is there. Our Father will never let us down. But we have to continue praying, because it is a gift and you want to hang onto it. The Holy Spirit will inspire you.”

What advice would Ann give to someone who is going through a difficult time and questioning their Faith? “Hang on to that thread of life,” Ann says with certainty. “Pray, just ask Jesus for that help.” After a moment, she adds, “Think of the promises in life rather than the negative. When you have Faith, the glass is always half full.”