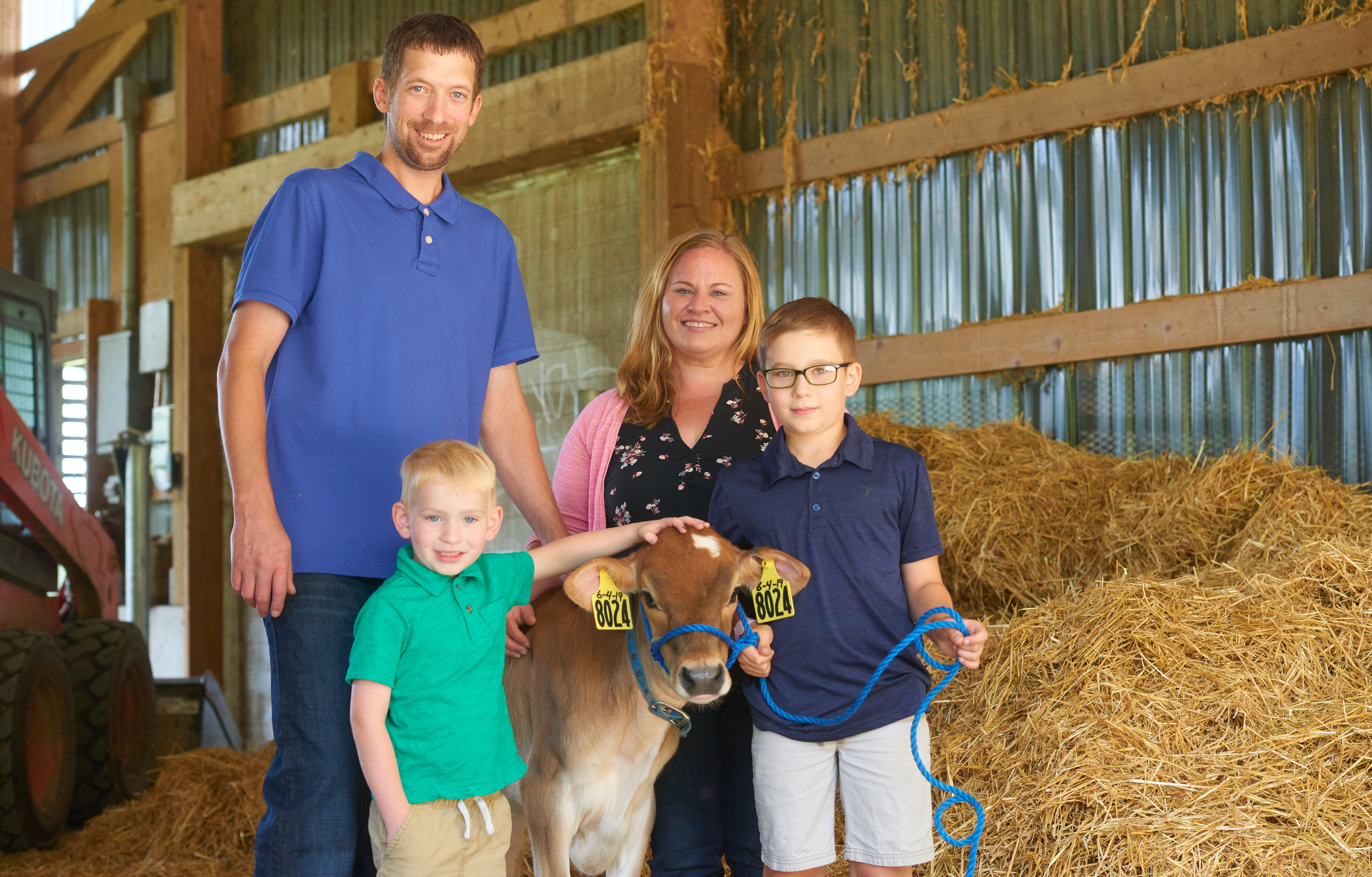 Dan and Michelle embraced God’s plan for their family

From the beginning, Dan and Michelle Herricks of Cashton were focused on family and Faith. Michelle converted before the couple married in August 2005, at Sacred Heart Catholic Church.

It was easy to come into the Church,” says Michelle. “When Dan proposed, I knew that I wanted our kids to have a strong Faith, and I wanted us to be the same Faith.

Dan and Michelle put their hope for children in God’s hands and worked in their careers—Dan on the family farm and Michelle as a teacher. “We weren’t avoiding or consciously trying to get pregnant,” Michelle says. “We had that mindset for a few years.”

They had taken a Natural Family Planning (NFP) course through the diocese and eventually decided to be proactive for pregnancy. By 2008, Michelle and Dan wondered why they hadn’t been successful.

“I thought it was me, that I wasn’t doing it right,” says Michelle. “The NFP wasn’t working. In February 2009, I went to the fertility department at the hospital 40 minutes away in La Crosse. We told them our history. They did a bunch of tests, and we did fertility treatments. I had vaginal ultrasounds every month and a new round of clomid and dexamethasone every month. After a few months, the doctor said I was not ovulating.”

Infertility took a toll, but Faith gave them strength. “We stayed really positive but there was a time halfway through when I got angry,” Michelle says. “I went to the sacrament of reconciliation and confessed that I was angry for having to go through everything. The priest suggested going to the Shrine of Our Lady of Guadalupe and praying to St. Gianna.”

Michelle was diagnosed with Polycystic Ovarian Syndrome (PCOS) and endometriosis. She took medications and had a laparoscopy in November 2009, to remove the endometriosis.

“On Christmas Eve of 2009, I took a pregnancy test, and it was positive,” says Michelle. “We were really excited. It was hard to keep it to ourselves.”
The birth of Devin in 2010 was a joy for Michelle and Dan. They expected the wait for Devin’s sibling would not take long. Unfortunately, that did not happen.

Looking back on it, everything we went through made me stronger. It made our marriage stronger.

Michelle began fertility treatments again in January 2012. Another laparoscopy removed endometriosis that had grown back, and hormone shots were added.

The treatments were difficult, very expensive and not covered by insurance. In April 2013, Michelle left her teaching job.

“We were faced with ending treatments unless I switched to a job that paid more,” she says. “The financial toll it took on us after so many months was huge, and it was a hard decision to leave teaching. I loved teaching, but I sacrificed it to continue trying for another baby.

In the fall of 2013, Michelle was told her only chance for pregnancy was invitro fertilization (IVF). The diagnosis was completely unexpected.
“I wasn’t expecting them to tell me I wouldn’t get pregnant again,” Michelle says. “It was absolutely devastating. I called Dan on the way home, and I was bawling. I didn’t want to go through IVF, and I knew he didn’t want to go through IVF, but I wasn’t okay with just having one child.”

Dan and Michelle had envisioned having four or five children. They knew IVF was not acceptable to Catholics.

They called Father Eric Berns, who married them, for guidance. “He knew what we were going through. He was really supportive,” says Michelle. “I was hoping for a loophole. He helped calm me down.”

His message was to not give up on having another child. Dan and Michelle went back to the shrine and prayed to St. Gianna for her intercession.

“I was trying to wrap my head around the thought that Devin might be our only child when that wasn’t our plan. All we could do was pray and give it over to God. We prayed and we begged,” Michelle says. “Saying no to IVF meant no more treatments with medications. We were just done with them.”

“It took a little bit of time to take a hold of it,” says Dan.

Giving God control was a challenge for Michelle. “In those few months I got better about it,” she says. “I did start to come to terms that this must be God’s plan for us. Then in January of 2014, according to Dan, I was moodier than usual.”

“I really didn’t want to. Getting that negative test, you just feel this anger and devastation,” Michelle says. “I hadn’t had any fertility drugs since October. I couldn’t see how it could be. I took a test the next day and it was positive.”

Michelle wanted a blood test to make sure, so she went to her regular doctor. “They took my blood and said someone would call me the next day with the results,” says Michelle. “I didn’t want to get my hopes up because I didn’t want to feel devastated again.”

The call the next day came from the doctor herself. “She told me there was no medical reason for me to be pregnant,” Michelle says. “She couldn’t even believe I was pregnant.”

The healthy pregnancy was joy for Dan and Michelle, but when Dylan was about to be born, the umbilical cord wrapped around his neck. During his first minutes, Dylan wasn’t breathing and had no brain activity, requiring a transfer to the Neonatal Intensive Care Unit in La Crosse. Despite a scary entrance into the world, Dylan is now a healthy and happy five-year-old.

“We always refer to Dylan as a miracle baby,” says Michelle. “Even now, when I take him in for check-ups, my doctor will remind me there is no medical reason for him to be here. God has been really good to us.”
Most people have no idea of Dan and Michelle’s difficult journey. “We didn’t want pity from everyone,” Michelle says. “We suffered silently through all of it. At the time I didn’t know how common infertility was. When you are going through infertility you have absolutely no control. You want something but you can’t make it happen. I found myself trying to have more control over little things in our lives. I had a lot of anxiety. Little things would stress me out. This one thing was huge in our life. I thought about it every day, all the time.”

Dan and Michelle know God was watching over them. “Looking back on it, everything we went through made me stronger. It made our marriage stronger,” Michelle says. “I look at all these wonderful things He gave us. He gave us this marriage. We have these two wonderful children. It may have taken us longer, but those are our gifts from Him. We are really grateful to God that He has blessed us as much as He has.”