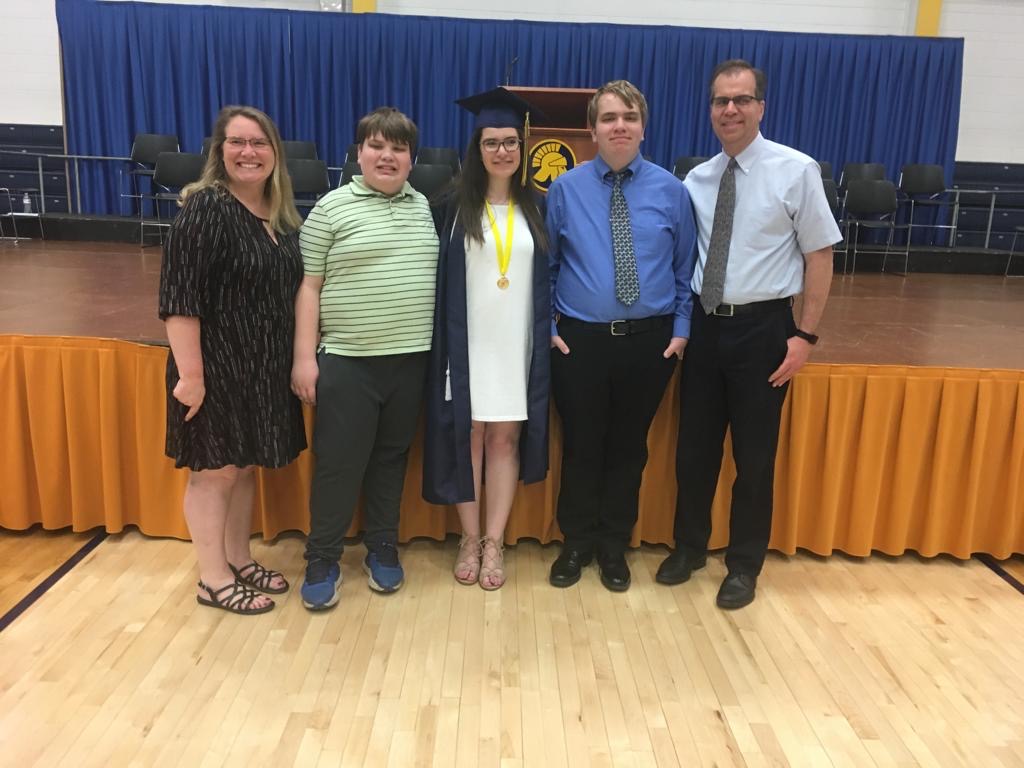 It’s a well-known fact that volunteering can bring you many benefits, such as providing a greater sense of purpose or meeting new people who become lifelong friends. Some studies even assert that people age more gracefully when they volunteer. But the Mark and Ann Kedrowski family from Wausau find that when they volunteer in their own parish communities of St. Michael and Church of the Resurrection, the benefits increase ten-fold.

For Ann, participating in parish activities was ingrained in her at a young age. “I grew up in a farm family, and religion was very important to us,” Ann explains. “My mother was in many church groups, and my dad was on the parish council. Helping out in the parish was our way of life.”

Church is a place of welcome; the more people reaching out their hands and helping, the better.

Ann became a lector at Mass at the young age of 14. “I couldn’t be an altar server—girls weren’t allowed to do that when I was growing up. So, reading was a way I could find connectedness to my Faith,” Ann says. “Reading the Liturgy of the Word, hearing the message, delivering the message, watching the faces of your fellow parishioners as you read—all of that made it a wonderful experience.”

Mark grew up in the Lutheran tradition but went through RCIA at St. Michael Parish when he and Ann became engaged. “Becoming Catholic flowed naturally from my desire to marry Ann,” he says.

The Kedrowski’s Faith grew as their family grew. Tragically, their first-born son, Nicholas, was stillborn. “Our parish family was really there for us during that difficult time,” Mark remembers. “Our Faith in St. Michael increased a lot during that time.”

Their daughter, Jeanna, was born a year later. She is now a freshman at UW-La Crosse. Sons Derek, 16, and Luke, 13, complete the Kedrowski family. “We made sure we stayed involved in the church, even when our children were very young,” Mark says. “Sometimes that meant one of us had to stay in the pew with the kids so the other could help out at Mass. But we adjusted.”

Reading at Mass seems to run in the family. Mark has been a lector at St. Michael for 23 years. “I was asked to read at a family wedding many years ago, and I thought, hey, I can do this at my own church,” Mark says. “I also volunteer in other ways on an ad hoc basis. I pick up where the need is.”

Ann and Mark encouraged their children to begin volunteering at church at an early age. Serving doughnuts after Mass was a favorite activity when the children were younger. “We stress for our kids to be involved and lead by example,” Mark says. “It’s good for children to learn that when they are involved, they are part of a community and build relationships.”

Jeanna became an altar server in third grade and excelled at the experience. In fact, parish staff looked to her to train others who wanted to become servers. “Jeanna was a great mentor to younger servers,” Mark says proudly. She went on to become a eucharistic minister in high school and was also a counselor at Vacation Bible School.

Jeanna believes volunteering at a young age set her Faith on a firm foundation. “As a kid, you go to church because your parents do,” she says. “But now that I’m on my own, I still go to church. I understand the importance of it.”

Derek followed in his parents’ footsteps and is a lector at Mass too. “I was an altar server, but I didn’t like that as much,” he admits with a chuckle. “I got my first taste of reading at an Ash Wednesday Mass when some of us kids in the faith formation class were asked if we wanted to do a reading. My friend volunteered, and I thought I’d give it a try it.”

Reading at Mass helps Derek find a deeper meaning in the Word of God. “It helps me digest the reading more than if I were just listening to it at Mass,” he explains. “I have to find out what’s important in the reading so that I know what to emphasize. My understanding of the reading is better because of that.”

Luke is an altar server and already sees the importance of being active in his church. “It’s good to make those connections as a young kid,” he says. “Then, when you become a teenager, you realize what’s possible in your Faith and want to stick with it.”

In addition to being a lector, Ann is also an extraordinary minister of holy Communion and a baptism instructor for new parents. Last year, she also became a faith formation teacher. “God calls us to give of our treasure, of course, but also our time and talent,” she says. “The church is a great place to practice the talent you have.” She believes participating in church activities can also help a young person grow. “You don’t know what talent might come out if they don’t give of their time,” she says. “That experience is so important. You never know where you will use it later on in life.”

Having an active Faith community is also important to the life of a parish. Ann believes the more people that are involved, the better the outcome. “Church is a place of welcome,” she says. “The more people reaching out their hands and helping, the better.” She gives the example of decorating the church for Christmas. “Whether there are six volunteers or 40, the church will be beautiful,” she explains. “But 40 people can make light work and take away some of the burden of just a few.”

Derek agrees. “Having more people come and be a bigger part of the church is a benefit.” He says he likes having the opportunity to work alongside others and learn from their perspectives. “More people volunteering helps diversify the experience. When different people participate, they bring different ideas to the table.”

The Kedrowskis are quick to identify many blessings that come from volunteering as a family at their parish. “First of all, it gives opportunities to spend time together as a family, which can often be hard to come by!” Mark says. “It also brings up conversations, especially about the liturgy, that we may not have had. To see your children participate in the liturgy and grow in their Faith and liturgical responsibilities is very rewarding.”