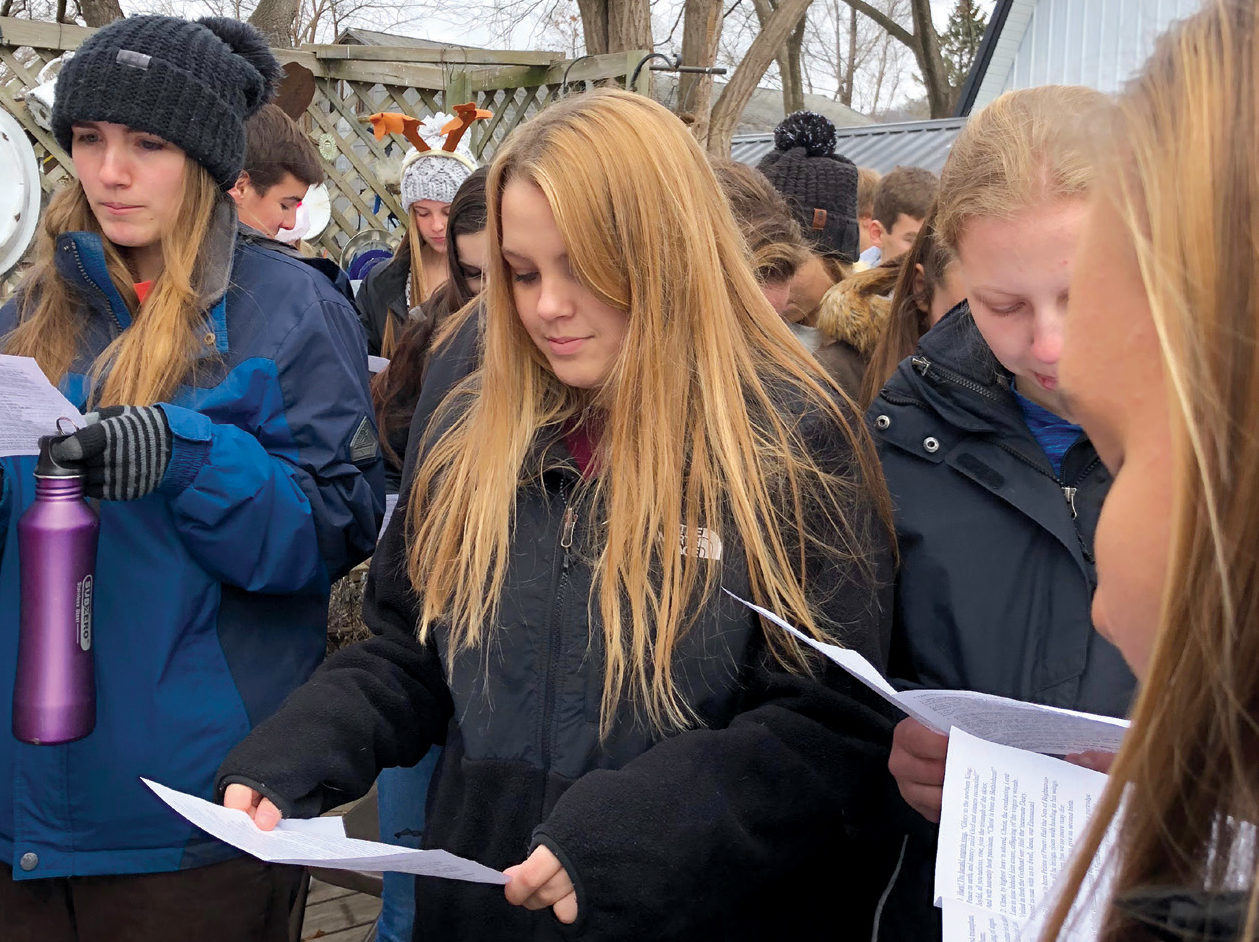 Featured Image: Christmas caroling at the home of a parishioner who was recovering from a terrible accident.

When you hear the term JWalkers, you might think about pedestrians who cross the street illegally. But for a group of about 50 high school students in Prairie du Chien, the term has a very symbolic meaning.

“JWalkers means ‘walking with Jesus,’” volunteer leader Mary Stoeffler explains. “The kids came up with the name themselves. We wanted them to really own the group and decide what they wanted to do and who they wanted to be.”

The kids are high school students from Holy Family Parish in Prairie du Chien. Co-founded in 2012 by Mary, Kurt Kravchuk and Father James Weighner, the JWalkers began as a parish youth group with a goal to get high schoolers involved and keep them engaged well after their sophomore-year confirmation.

“Our ultimate goal was to have the kids be members of the group all the way through high school. Right now, about 50% remain in the group through high school and beyond, so I consider that a success,” Mary says proudly. “It’s the older kids who make this group successful. It’s their leadership and their example. The young kids see the older kids still in the group, and they think the group must have a lot to offer.”

Former JWalker Gracie Colson agrees. “When I was a freshman and sophomore, it was really special to be able to hang out with the older kids. They were so kind and welcoming and became our role models.” Gracie is now a freshman at Western Technical College in La Crosse, but she looks back on her JWalker years with fondness. “You grow amazing connections with the other kids in the group. It’s really special to have people your own age to share your Faith.”

Service is at the heart of the JWalkers. From helping local seniors do lawn work or shovel snow, to leading Sunday Masses at Holy Family Parish, they are involved. “One of the first things the group did was decide to take one Sunday Mass a month and participate in all of the Mass parts—lectors, ushers, altar servers and gift bearers—they also sold Scrip.” Mary says. “Their active participation is a witness to everyone in our parish.”

And the parishioners respond accordingly. “At the end of Mass, our kids stand outside with buckets, and everyone empties their change into the buckets,” Mary explains. “We call it ‘Youth for Change, Change for Youth.’ What they collect helps to fund service projects.”

For the last seven years, the JWalkers’ major service project has been to go on a mission trip in June. “The first five years, we went along with the Diocese of La Crosse on their mission trips,” Mary remembers. “But the number of JWalkers who wanted to participate kept getting bigger, so for the last two years, we’ve gone on our own.”

The JWalkers take ownership of the mission trips, contacting local parishes to find places to stay, lining up transportation and discovering what work needs to be done. “There is nothing they can’t do,” Mary explains. “For instance, they may do debris clean-up or help with landscaping, dry walling or painting. If they don’t know how to do something, one of the chaperones will teach them. They learn so many valuable tools that way.”

“Father Weighner joined our trips the last two years,” Mary says of their former pastor. “He worked right alongside the kids. He offered daily Mass and talked about what he witnessed of them. I believe that was huge for their Faith formation.”

Each night the group discusses what they experienced during the day. “Everyone speaks on how they were the hands and feet of Christ that day,” Mary says softly. “It really makes them think.” The mission trips also get the youth away from social media, allowing them to unplug for a week. “During the trip, you hardly see any of them on cell phones, except to take valuable pictures,” Mary says with a laugh. “They’re so engaged in service to others. The trips forever change them.”

Mary believes that in a day and age where you often hear about young people leaving the Catholic Faith, the JWalkers are evangelizing. “They don’t realize how much people respect what they do,” she marvels. “Their actions inspire our older parishioners, too. Some of our seniors say they couldn’t afford to do those types of mission trips when they were young, and they can’t physically do the work anymore now in their older age. But they can support the group financially. And they do.”

The JWalkers receive community support as well. The local Hardee’s hosts an annual breakfast with the proceeds going to their group. “The JWalkers help anyone and everyone in our community,” Mary says. “I get calls all the time, asking for their help. And we’re happy to do so.”

Easter and Christmas are special times for the JWalkers to give back to their community and their parish. “At Christmas, we go caroling at nursing homes and make gifts for the residents and people in hospice,” Gracie remembers. On the Wednesday of Holy Week, the JWalkers put on a live Stations of the Cross for the parish to usher in the Triduum.

Although relatively new as the pastor of Holy Family Parish, Msgr. Charles Stoetzel is already impressed with the group. “The students are very much excited to be JWalkers,” he says. “They are involved in various projects which is very edifying to see their desire and excitement.”
Mary says being a part of the JWalkers has changed her life and the lives of countless others. “Having young people as witnesses of our Faith is huge,” she says with a smile.

Gracie agrees and encourages other young kids to give it a try. “It is one of the most life-changing experiences you’ll ever have,” she says enthusiastically. “Sometimes, it might be hard to get out of bed early to go help someone. But once you’re there, you will feel the best you have ever felt. Just knowing you have all these people that God assigned you to help, it’s just amazing.”