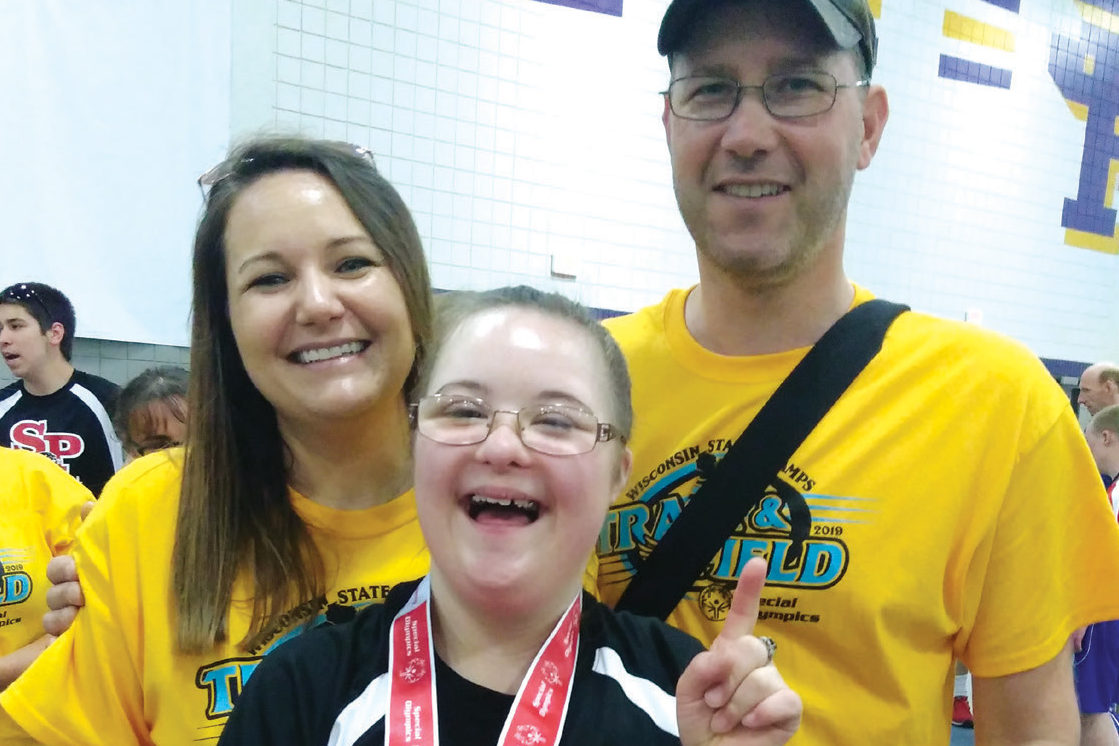 “Let me win. But if I cannot win, let me be brave in the attempt.” This is the oath that is proudly recited at the beginning of each Special Olympics event by these special athletes and speaks volumes for their determination and character.

Kaylee Hintz is the daughter of Jake and Angela Hintz, members of St Bronislava Parish in Plover. Kaylee is 20 years old and the oldest of four siblings. She was born with a congenital heart defect and Down’s syndrome. Down’s syndrome is a condition in which a person has an extra chromosome. It can affect a person’s cognitive ability and physical growth, cause development issues and present a higher risk of some health issues.

Angela, her mother, reflects, “There were a lot of unknowns following Kaylee’s birth. Would she live to see her first birthday? What kind of care would be needed to repair her heart? What does it entail to raise a child with Down’s syndrome? The one thing we knew with certainty, however, was that God was there to guide us.”

Special Olympics has 5 million athletes in more than 172 countries worldwide with local, regional and national competitions.”

Kaylee’s baptism was performed in the hospital due to her weak heart. She was on life support and not showing any signs of improvement. Overwhelmed by the thought of losing a child, it was difficult to think clearly. “We felt God’s arms wrapped around our helpless baby, as well as the entire family,” said Angela. “Immediately following her christening, a sudden calmness filled the room.” When Kaylee was five months, she underwent open heart surgery and, for the next several years, had additional surgeries.

Growing up with three sisters, Kaylee has always pushed herself to do the same things as they did. She enjoyed figure skating, competing in track and field and selling sweet corn on the family-run farm. They have always supported one another. Today, Kaylee is competitive when it comes to sports. Special Olympics has provided her several opportunities to participate in various tournaments.

Special Olympics has its roots accredited to Eunice Kennedy Shriver. Her sister Rosemary (also President John F. Kennedy’s sister) was born with intellectual disabilities. In 1963, Eunice Kennedy Shriver started a day camp called Camp Shriver in her home town of Potomac, Md., to provide children with disabilities the opportunity to participate in athletic events. This effort grew, and, in 1968, she organized the first International Special Olympics Games at Soldier Field in Chicago that had 1,000 athletes participate. She believed the lessons the athletes learned through sports would translate into new competence and success in school, in the workplace and in the community. Above all, Mrs. Shriver wanted the families and neighbors of people with intellectual and/or physical disabilities to see what could be accomplished, to take pride in their efforts and to rejoice in their victories, determination and character.

The mission of Special Olympics is to provide year-round sports training and athletic competition in a variety of Olympic-type sports for children and adults with intellectual disabilities. Each athlete is given opportunities to develop physical fitness, demonstrate courage, experience joy and participate in a sharing of gifts, skills and friendship with their families, other Special Olympics athletes and the community. Athletes start competing at the age of eight. There is no upper age limit, and in fact, nearly one-third of the athletes are age 22 or older. Today, Special Olympics has 5 million athletes in more than 172 countries worldwide with local, regional and national competitions. Winners roll up to the world summer and winter games held every two years.

Special Olympics of Wisconsin (SOWI) is divided into seven regions. Each region is managed by both program and development staff, and serves athletes in its assigned counties. Within each area, there are agencies that are divided into teams, which are community, organization, school or independent based. Each team trains and competes in one or more seasonal sports throughout the year, representing more than 30 different sports held throughout the state. The winter games are held in Wausau at Granite Peak ski hill and Nine Mile Cross-Country and Snowshoe area. Since 1979, the state summer games have been held at UW-Stevens Point, and last summer marked its 40th anniversary. More than 1,300 athletes competed in 57 different events, including athletics (track and field), swimming and soccer. This event has become a huge community event with lots of volunteers and businesses helping each year.

The St. Bronislava Knights of Columbus 13880 and their family members, with help from Stevens Point KC 1170, run the food concessions tent. Between athletes, coaches, family and the public they serve, brats, burgers, fries, cheese curds, soda/water in addition to healthy food plates to more than 1,000 people. Kaylee’s grandparents, Jim and Susan Anderson, along with Bill and Linda Konkol, all members of St. Bronislava Parish, have been co-chairs of this effort for the past several years. Don Young, one of the St. Bronislava KC volunteers, had this to say, “As a retiree, I have been helping to cook the cheese curds and French fries for more than 10 years now, and every year it is so rewarding and heartfelt to see the enthusiasm and joy in these special athletes.”

The St. Bronislava Knights of Columbus 13880 and their family members, with help from Stevens Point KC 1170, run the food concessions tent. Between athletes, coaches, family and the public they serve, brats, burgers, fries, cheese curds, soda/water in addition to healthy food plates to more than 1,000 people. Kaylee’s grandparents, Jim and Susan Anderson, along with Bill and Linda Konkol, all members of St. Bronislava Parish, have been co-chairs of this effort for the past several years. Don Young, one of the St. Bronislava KC volunteers, had this to say, “As a retiree, I have been helping to cook the cheese curds and French fries for more than 10 years now, and every year it is so rewarding and heartfelt to see the enthusiasm and joy in these special athletes.”

Besides all the volunteers, a lot of the food items are donated by local businesses. Some items include: burgers and coffee from Hardees, buns from Arby’s, French fries from McCain Foods, cheese curds from Monogram, pickles from Sky Club of Plover, water from KwikTrip and soda from Unitel Inc. Proceeds from the concessions are invested back into Special Olympics. One recent example is the first-, second- and third-place tall flag banners that are now used at the games. Rather than using raised podiums, the banners created a safer way to present the athletes their awards and still capture their smiles and excitement.

In addition, fourth degree KC honor guards from throughout the state are present for the Thursday night opening ceremonies to welcome the teams. Law enforcement units from throughout the state help as the torch is carried across Wisconsin. Special Olympic athletes run, walk or bike more than 400 miles to light the Olympic torch at the opening ceremonies.

Besides their granddaughter, Kaylee, Jim and Susan Anderson, through the local Community Partners group, also sponsor Janet, age 60, who also competes. At last summer’s games, Janet took home two first place medals in track and field, but her favorite sport is bowling. As soon as one season comes to an end, she is eagerly waiting for the next sport to begin.

Throughout the Diocese of La Crosse, many events are held. The public is always welcome, and it is amazing to see. There is also a huge need for volunteers. The Special Olympics Wisconsin website is specialolympicswisconsin.org. They will gladly find a spot for your assistance or accept your donations.

Most recently, Kaylee participated in the regional bowling tournament in Weston, earning a third-place medal, qualifying her for the state tournament. The excitement leading up to these tournaments is heart-warming. Her dad, Jake, comments, “Special Olympics has provided Kaylee an opportunity to be like her three sisters, who also compete in school sports or other types of activities. They are her biggest fans! Kaylee has learned to practice hard, support her team members and know it’s okay if you don’t medal every time.”

In Kaylee’s words, “My favorite part of Special Olympics is the opening ceremony where we parade in. I also like the shot put because I can throw it far.”

There are many opportunities in our communities for people with special needs. We know God has big plans for Kaylee! With Kaylee’s “can-do” attitude, her future looks “SPECIAL.”