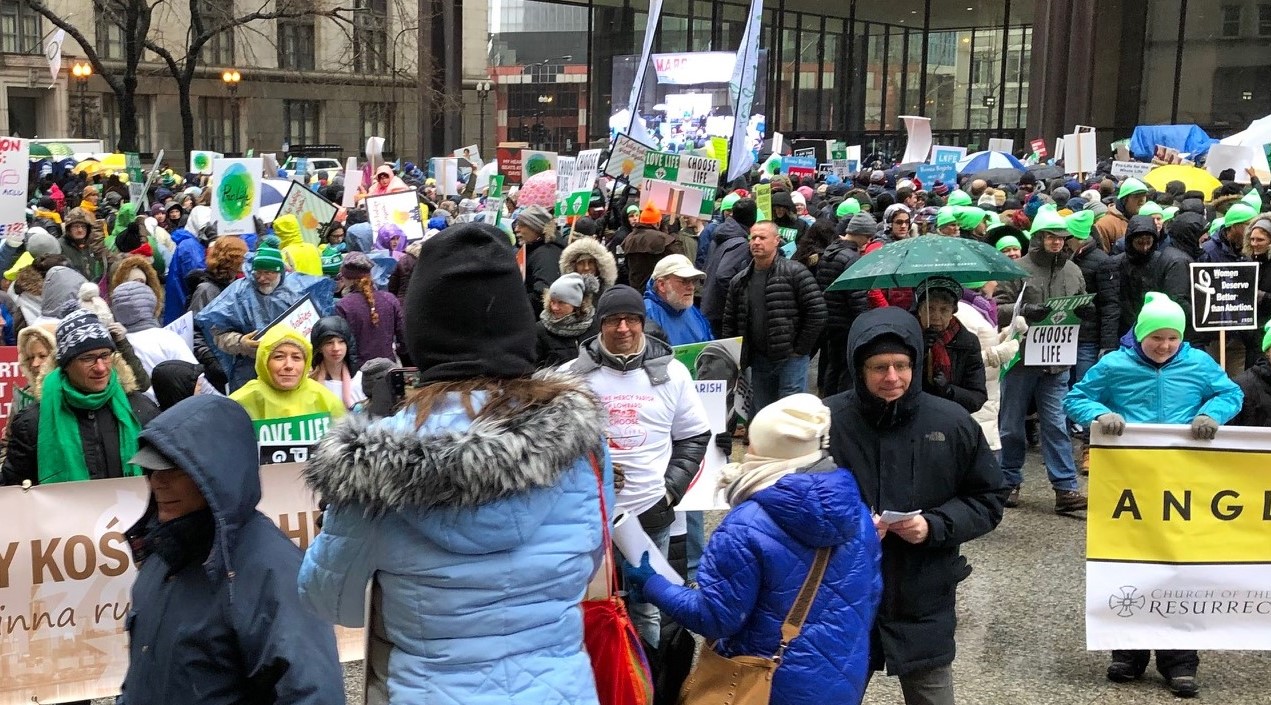 “Abortion is the ultimate degradation of women.” These words rang out across Daley Plaza in downtown Chicago at the annual “March for Life,” sponsored by Pro-Life Wisconsin, on Saturday, Jan. 11. The theme of this year’s rally was “Life Empowers: Pro-Life is Pro-Woman.” It was a journey with moral and spiritual significance, this protest to end abortion. It was an inspiring, life-affirming day, indeed a pilgrimage.

Seven buses from Wisconsin rendezvoused at Daley Plaza. This new venue – not the Federal Plaza of years past – but a larger area in anticipation of exceeding the previous turnout of 10,000 pro-life marchers.

Fifteen people had boarded our bus at Onalaska and 10 more at Tomah. Our bus captain, Marie Allen, was assisted by Charlie Peters, Grand Knight of the La Crosse Knights of Columbus Council 839, and Patty Woodworth of Red Roses Rescue.

On our bus, on the way to Chicago, the documentary film Fatal Flaws:Legalizing Assisted Death was shown. The film proposes that euthanasia and assisted suicide may be a dangerous slippery slope and asks the question, “Should we be giving doctors the right in law to end the life of others?” Morning prayers were recited. Charlie Peters led the rosary as we approached Chicago.

The weather was a concern, with road signs flashing “ICY CONDITIONS AHEAD-REDUCE SPEED.” The temperature hovered around 30 degrees, with drizzle and light snow. The tops of the skyscrapers were obscured by low clouds and fog.

As our bus pulled up along Canal Street, several members of Pro-Life Wisconsin boarded and greeted us. Therese Aukofer, Dan Miller, and Matt Sande from PLW (Pro-Life Wisconsin) gave pep talks, passed out signs and gave us updates on legislative initiatives in Wisconsin.

As the 1 p.m. rally start time approached, the seven Wisconsin buses unloaded close to Daley Plaza. We were greeted by presenters on the raised platform. The proceedings were shown on a huge screen.

Then the speeches began. Elisa told of becoming pregnant while attending college to become a special education teacher. Her boyfriend had convinced her to have an abortion. Instead of doing so, she attended Aid For Women which offered free pregnancy testing, ultrasound, consulting, and prenatal care. Subsequently, she carried her pregnancy to term, and her son was born in 2018. She went on to graduate from college and is now a teacher.

Illinois Democrat Third District Congressman, Dan Lipinski, representing the south side of Chicago said, “Every life is sacred and needs to be protected. No one is expendable.” Dr. Karen Deighan, Loyola Medical OB/GYN, who has practiced for 30 years, exclaimed, “The miracle of life is awesome.” Alex Lehan, weDignify College Student Leader, told the huge crowd that members equip, educate, and empower students to lead pro-life groups and mentor students to build a culture of life on campus and beyond. Cardinal Blase J. Cupich of the Catholic Archdiocese of Chicago, stated, “We thank God for the gift of life.” Pat McCaskey, board member and vice-president of the Chicago Bears, grandson of football’s, George Halas, thrilled the crowd with a poem tribute to his mother. The author of six books, McCaskey and his wife, Gretchen, have three grown sons.

Claire Culwell was an abortion survivor. She met her birth mother 10 years ago, 30 years after her own birth. Her mother had an abortion, but Claire was a twin and survived. The abortion doctor missed one. Claire weighed only three pounds at birth. “You’re looking at an unborn baby,” she told the crowd.

After the quick 25 minutes of talks, the March began. The marchers were led by a contingent of bagpipers and flanked by police on foot, on bicycles, on horseback, and in squad cars. The one-mile-long pilgrimage headed east on Washington Street a bit and then south on famed Michigan Avenue.

The atmosphere was most memorable – 10,000 positive upbeat people of all ages from all around the Midwest, marching for life. There were throngs of young people carrying banners identifying their school, city or church. Many groups wore their trademark distinctive caps. The light drizzle could not diminish the joyful and lively mood of the thousands of marchers carrying the message that abortion is not healthcare, that love conquers fear and that choosing life is possible. Choosing life saves not only the life of a baby, but also the lives of its mother and father.

We returned home with a renewed sense of purpose, secure in the knowledge that all life is precious, and that the March for Life reaffirms this belief. As it says in scripture: “I have set before you life and death, the blessing and the curse. Choose life, then, that you and your descendants may live, by loving the Lord, your God, heeding His voice, and holding fast to Him.” Deuteronomy 30:19

Story and Photography by Larry Scheckel