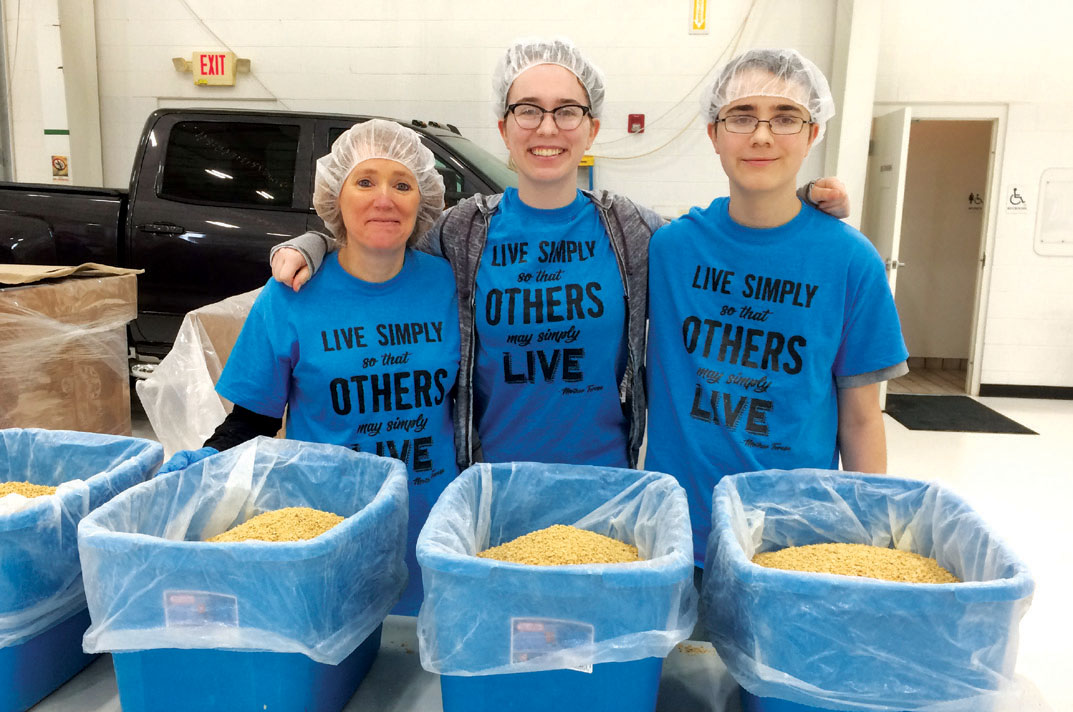 So said Jordan Sorenson, a University of Wisconsin—Stevens Point (UWSP) student, to Michelle Shulfer, her instructor in the School of Health Care Professions, last February. Together with more than 500 volunteers from the university and the surrounding community, they had just finished packing nearly 117,000 meals for starving children around the world.

The seeds had been planted two years prior, when Michelle, a member of St. James Parish in Amherst, felt prompted to bring a dozen of her UWSP students to a meal-packing effort in Marshfield, a regular host site for “MobilePack” initiatives under the auspices of Feed My Starving Children (FMSC), which has shipped more than 2.5 billion meals to 101 countries in the last 10 years.

Michelle had been looking for a way to help college students look beyond themselves to others in need. The MobilePack experience provided that opportunity, and it had the students gushing afterwards, “We need to do this on our campus!” Michelle’s daughter, Theresa, was one of the students involved. A senior chemistry major at UWSP and an alumna of Pacelli Catholic Schools, Theresa became the other half of a “dynamic duo” with her mom, as they started planning to make the dream a reality.

Michelle turned to the Feed My Starving Children website, where she found a step-by-step template for sponsoring and running a MobilePack. She learned that sponsors must recruit about 500 volunteers to pack more than 100,000 nutritionally formulated meals consisting of soy, rice, dried vegetables and mineral powder. They must also raise the funds to pay for the meals (less than 25 cents each—but that adds up to nearly $25,000). Fortunately, as a first-time site, the Stevens Point MobilePack qualified for “seed project” status. That meant any fundraising shortfall would be offset by surplus funds from other MobilePacks and donations to FMSC.

MobilePack sponsors are also required to provide a staging facility for the two-day initiative, with doors large enough for forklifts to bring in the huge pallets of bulk food from the FMSC delivery truck. Michelle arranged for a hall on campus, but it fell through with only days left to find a suitable alternative. Providentially, John and Patty Noel offered their Noel Hangar at the Stevens Point Municipal Airport, which proved to be ideal.

Pacelli High School principal Larry Theiss came with his wife, their three daughters, his parents, a niece and a nephew, as well as the Chinese exchange student who has been staying with them. “We had enough people to man an entire packing station,” Larry said. “It brought us closer as a family, and it was so meaningful to serve in that way, knowing we were helping to feed starving children.” Also present was Father Steve Brice, who serves the UWSP community as pastor of Holy Spirit Parish in Stevens Point. He shuttled student volunteers to and from the campus in a van provided by the Boys and Girls Club. “Father Brice was amazed and so supportive, and he could see how much fun everyone was having,” Michelle said.

Sponsors of a first-time seed project, like the UWSP MobilePack, must commit to a follow-up effort for which they raise all the funds prior to the date of the next MobilePack. Michelle, Theresa and their group of volunteers are thrilled to oblige. The second UWSP MobilePack will be held on Feb. 21–22, 2020, at the Noel Hangar at the Stevens Point Municipal Airport. If you would like to make a donation and/or volunteer for a two-hour packing session, please visit give.fmsc.org/uwsp. A grant from the Diocesan Social Ministry Fund will match the first $8,000 in donations toward the total of $26,127 needed to cover the cost of 108,000 meals. To pack this many meals, 545 volunteers will need to offer one two-hour shift sometime during the two days of packing.

Reflecting on what this mission has meant to those involved, Michelle says, “Little did I know how much of an impact it would have on the lives of my students. I’ve witnessed a real change in them. It’s given them purpose and helped them to realize they can do something to make a difference in the world, one meal at a time.

I trust in God’s plan and timeframe, not mine. Once I stepped back and trusted, everything fell into place, and amazing things happened. The words, ‘Let go and let God,’ have a whole new meaning for me!”