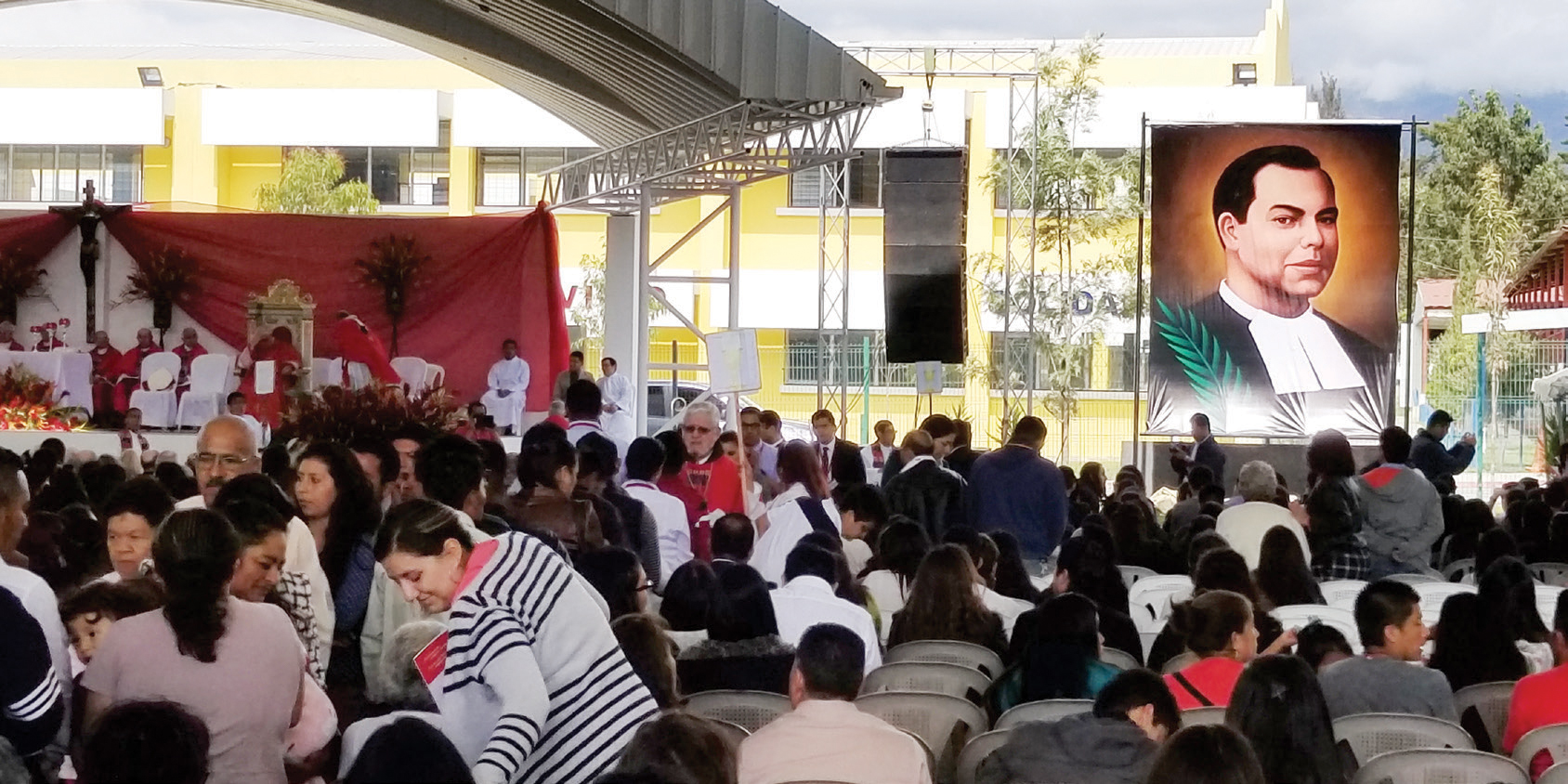 The place is a boarding school, De La Salle House, in Huehuetenango, a city in west-central Guatemala on the southern slopes of the Cuchumatanes Mountains. These highest mountains in the country are far away, 2,700 miles, from Ellis, Wis., where Blessed Brother James Miller, FSC, grew up. Huehuetenango means “Place of the Ancients,” referring to the ancient Mayan Indian center called Zaculeu.

It was in the morning, 38 years ago, on Feb. 13, 1982, when Brother James stepped into Brother Paul Joslin’s office and told him he was taking his class of indigenous students on a picnic to celebrate Friendship Day (the Guatemalan equivalent of Valentine’s Day). Later that day, after he had returned to the school, “He decided to patch a wall right outside the entrance to the school. I am sure that he was thinking ‘I am on the property [and that no harm would come to me].’ Unfortunately, he was on a step ladder when … men with guns approached and he was shot on the ladder he was standing on,” recalled Brother Paul in an interview with Madeline van Santen. “An American sister nurse arrived at the scene moments later and found that Brother Miller had died,” according to an official press release from Guatemala. It was 4:15 p.m., Feb. 13, 1982.

There were many questions. Who were these men and why did they murder him? A subsequent press release from Guatemala said, “We do know, however, that Brother’s death was no accident.”

May the martyrdom of this exemplary youth educator, who paid with his life for the service to the people and the Guatemalan Church, reinforce in that beloved nation the paths of justice, peace and solidarity.” – Pope Francis’ Angelus remarks on Dec. 8 in Rome

Blessed Brother James Miller was a member of the De La Salle Christian Brothers. He was dedicated to serving the educational needs of young people in Central America. First, as a teacher and administrator in Nicaragua from 1969 to 1979, leaving as political tensions intensified, and then returning in 1981 to serve the poor in Huehuetenango. Young men traveled from surrounding villages to attend the school where he and his brothers taught because it offered them hope of escaping from the poverty they found themselves in. These young men knew that with a high school diploma, they would be eligible to attend any Guatemalan university. They knew that Hermano Santiago [as he was known to the Huehuetenango community] would help them. What possible threat did this man of God pose to anyone?

The answer lies in the struggle for political power in Guatemala’s civil war during the time Blessed James was at the De La Salle House in Huehuetenango.

Brother Paul, in his interview, relates the story of a young man listening to a radio report at the time that said that the De La Salle Christians Brothers were against the government. “This young man turned to me and said something to the effect of, ‘You should take that as a compliment.’ Meaning that we were in solidarity with these young men. I think that just knowing they appreciated the opportunity to finish high school … was a tremendous source of satisfaction that kept me going and Brother Santiago. If you take the side of people who are economically poor, then you will be mistreated in the same way as the economically poor are mistreated. And that is exactly what happened to Brother Santiago Miller.”

In the years following the tragedy of Blessed Brother James Miller’s death, much has been written about his life in newspapers, books and magazines, both locally and nationally. One thing is crystal clear: He was a dedicated servant of God, tirelessly building schools, both figuratively and literally, and being a champion for those who were being repressed because of their poverty.

His dedication to his life’s mission, the example of his life and his subsequent martyrdom resulted in a decree by Pope Francis that he should be beatified. That occasion became a reality on Dec. 7, 2019, in Huehuetenango.

Attending the beatification ceremony of Brother James Miller in Huehuetenango were not only members of the Lasallian family, but also a pilgrimage group of 17 from Wisconsin, organized and led by Father Tom Lindner, pastor of St. Anne Parish in Wausau. The pilgrims, together with hundreds of people, gathered for the beatification Mass of Blessed Brother James Miller to reflect and remember how he became part of their lives and how that experience affected them.

Some people knew Jim Miller in his early life in Ellis, near Stevens Point. Others knew of him in death, wishing to honor this humble man and share a spiritual journey.

Pilgrim Carol Wysocki knew him as a child. Her grandparents’ farm was near the Miller place. Her husband Lawrence knew him better, as elementary school students together for six years and classmates for a year at Pacelli High School, when he drove him to school every day. “We continued to follow his journey,” she says, doing so now as a pilgrim. “He was a faithful servant of God who we were blessed to know.”

Justine Brilowski grew up near the Miller family, too, and young Jim was an altar boy in her wedding. She carried a photo to Guatemala of her wedding day with young Jim peeking around the church entrance.

Louise Miller Shafranski, Blessed Brother James’ sister, represented the Miller family. She was the rock star of the occasion, mobbed by those who have long revered the story and witness of Hermano Santiago. They waited in line to talk, hug, photograph and establish that human connection to Blessed Brother James.

James was the oldest of five; Louise was the youngest, with 12 years separating them. She doesn’t have childhood memories of him, but recalls him when she was 15 and he was 27. He was home for about a month then, before he went to Nicaragua for his first assignment abroad. It wasn’t until the last two years of his life the siblings were able to connect more. He left Nicaragua, was at Cretin High School in St. Paul, Minn., for a year and then was assigned to Guatemala. She recalls him coming home, fully knowing his life was in danger if he returned because of the civil war there, but he chose to be with his people.

She and her husband Richard traveled to Huehuetenango for the 15th anniversary of his assassination in 1997 and coming back in December was a whirlwind. They were greeted by Christian Brothers they’d come to know and were introduced to other Brothers from around the world, as well as religious sisters from Africa, Nicaragua and Argentina. “I more than happily put myself in the people’s presence, to speak with them, to connect with them,” she recalled upon returning home. “That was very important to the people attending. Through me, they had a connection to Jim. In many ways, I think he guided me through the crowds and helped me do what I had to do, and knowing Jim, he would have thought, ‘Wow, this is a whole lot of fuss for me?’”

People remembered him. Former students “couldn’t tell me enough how much they loved Hermano Santiago. They were so honored to have met me and could share their love and admiration for him through me. They were marvelous, wonderful, generous people, so warm in receiving us and their genuine unconditional love they gave us through the entire ceremony … there are no words for it,” she says.

Their parents were extremely proud “of their boy, but I also think they would have been very happy that his death was not in vain. Because of his death, the plight of the people of Guatemala and all of Central America has been brought into the light and has improved many things for those people,” she says.

“You know what they say, ‘Ordinary people can and do extraordinary things.’ He started out as an ordinary little farm boy from Ellis, and he achieved extraordinary things. Not only in life but also in death. To think, my brother is able to sit at the right hand of God and take petitions from those of us on earth.”

Perhaps one day he will be declared a saint. If saints are ordinary people doing extraordinary things, that idea certainly is reflected in Blessed Brother James Miller’s writing: “God knows why He continued to call me to Guatemala, when some friends and relatives encouraged me to pull out for my own comfort and safety. I have been a Christian Brother for nearly 20 years now, and my commitment to my vocation grows steadily stronger in the context of my work in Central America. I pray to God for the grace and strength to serve Him faithfully by my presence among the poor and oppressed of Guatemala. I place my life in His Providence; I place my trust in Him.”

And the pilgrims prayed: Blessed James Miller, pray for us.

Within months of his assassination, a concerted effort was made to tell the story of Blessed James Miller’s witness and martyrdom and to encourage an ongoing pursuit of justice and peace. The first Brother James Miller Day was held on Feb. 13, 1982, in Stevens Point. It would become an annual commemoration held on the Sunday closest to that date for the next 24 years.

A joint effort of the Diocese of La Crosse and a local organizing committee, the event included prayer, a keynote address by someone engaged in the work of social justice on a national, state or local level, remarks by the diocesan bishop and the presentation of the Brother James Miller Award “recognizing individuals, organizations and religious communities bearing witness to the Gospel pursuits of love and service in the spirit of Brother James.” The first recipient of the award was Servant of God Sister Thea Bowman, FSPA, who at the time was an instructor at Viterbo University in La Crosse. Her cause was opened in 2018 by Bishop Joseph Kopacz, of the Diocese of Jackson, and is being promoted by the Franciscan Sisters of Perpetual Adoration.

Keynote speakers over the years included noted authors, such as Parker Palmer; professors from institutions such as Notre Dame, Fordham, Loyola and Viterbo universities; St. Norbert College and Jesuit School of Theology in Berkeley, Calif.; a state Supreme Court justice; area residents engaged in social justice outreach; several bishops and priests; and Miller family members and Christian Brothers who told the story of their “brother.”

In 2000, an icon of Brother James was commissioned by nationally recognized iconographer Brother Robert Lentz. It was presented and blessed at the annual commemoration in 2007. The original icon is on permanent display in the entrance of Pacelli High School in Stevens Point. Copies of the icon are available from trinitystores.com.