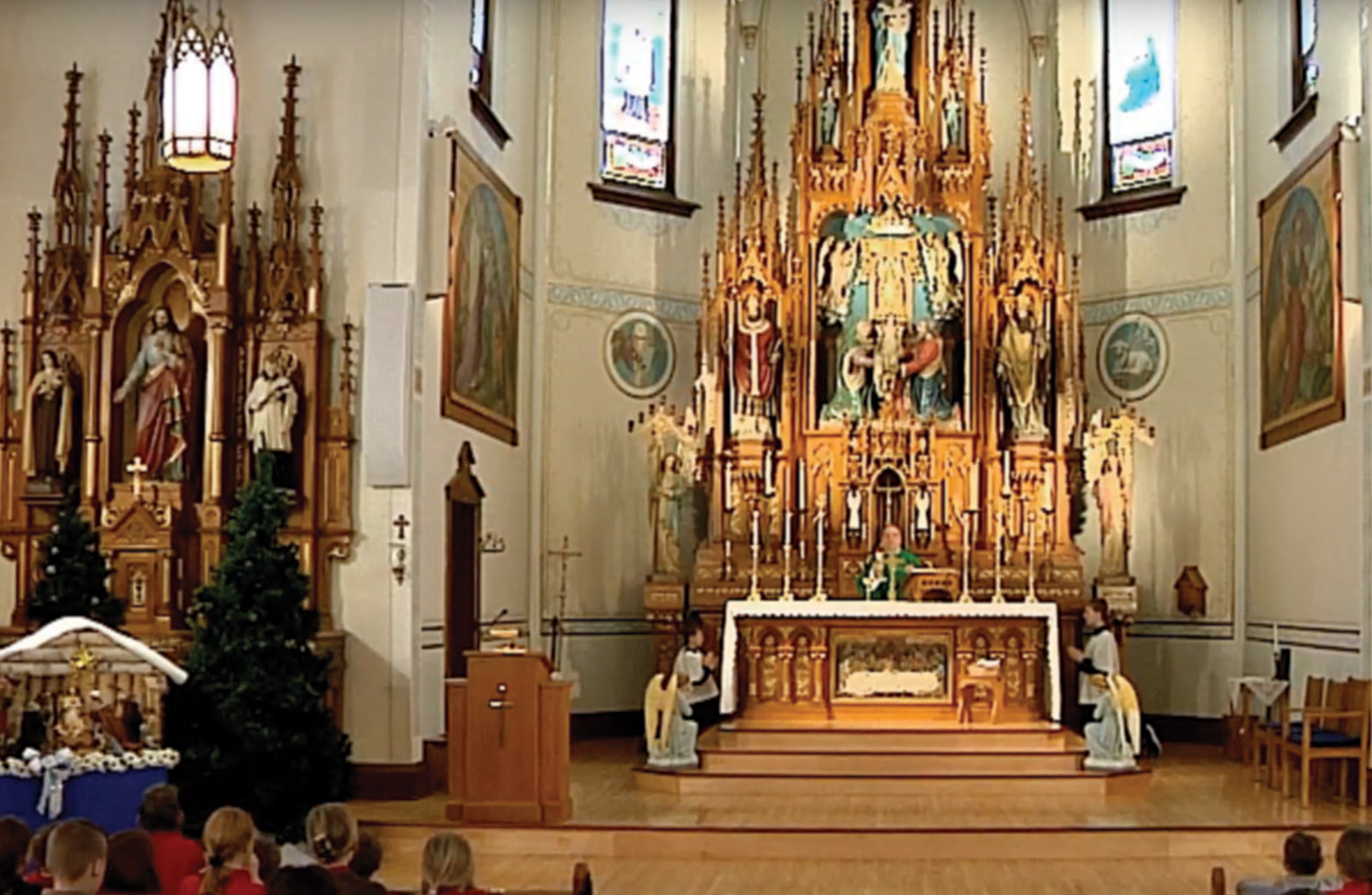 There are two principal forms of the Roman Rite Mass: The “Ordinary Form,” which most people recognize as the Mass celebrated beginning after the Second Vatican Council, and the “Extraordinary Form,” which was celebrated in its current form since the Council of Trent with the latest tweak coming in 1962. Both forms of the Mass are offered throughout the diocese, including at one of my own parishes, the Nativity of the Blessed Virgin Mary on St. Mary’s Ridge. Every so often, when someone catches that the Traditional Latin Mass is offered at the parish, they are intrigued and have any number of questions about it. The most common questions are: “Why?”; “Who goes to such a thing?”; “Why are people attracted to it?”; and “Doesn’t that cause problems in the parish?”

“Why do people look for the Extraordinary Form of the Mass?” Some have suggested that those looking for a Latin Mass are old people who can’t let go of the old and settle in with the new—which is now almost 50 years old! They are often surprised to discover that at 55 years old I am one of the oldest people in the church on a given Sunday. There are about 45-50 people who regularly attend and only four of them are older than I—and two of them not by much. In fact, half of the adults who are in attendance didn’t even grow up Catholic. So it isn’t about “hanging on.”

I find both Masses to have an overwhelming commonality. It is often literally the difference between speaking in Latin or in English.”

In asking those attending St. Mary Parish what they value about the Extraordinary Form, they most often talk about reverence and a particularly strong focus on God. I know! I can hear people objecting that the Mass at their parish is very reverent and always focused on God. Let me explain.

The Traditional Latin Mass is the last of my three Sunday Masses and I love it. I would most definitely consider my previous two Ordinary Form Masses to have been well-celebrated and reverent, and God is most definitely the focus. However, there is a difference—and that difference appeals to a not insignificant number of practicing Catholics around our diocese.

I often explain it this way: I talk about the Ordinary Form of the Mass as being more “evangelical,” while I find the Traditional Latin Mass to be more “contemplative.” Using the language of the people who are gathered (be it English, Spanish or Hmong in this diocese), the greater emphasis on “active participation” and more opportunities for that participation and more options within the Mass for the various prayers all can help draw people into the mysteries we are celebrating—and I value that opportunity.

The Extraordinary Form of the Mass on the other hand seems to me to be more “contemplative.” The relatively greater quiet, with fewer points at which the assembly is asked to speak, and also the relatively few times where the priest is speaking above a whisper can allow for more contemplation of the mysteries being celebrated, but one need also understand better why they are there and also what is happening and why.

Some ask me, “Which is your favorite form of the Mass?” My answer is always: “Both of them!” I value greatly what each form of the Mass has to offer a community and I embrace each form’s uniqueness, while recognizing as the priest celebrant that I am celebrating the same Roman liturgy. In fact, on Sundays where I am using the Confiteor and the Roman Canon in the Ordinary Form of the Mass and then offer the Mass in the Extraordinary Form, I find both Masses to have an overwhelming commonality. It is often literally the difference between speaking in Latin or in English.

Some will ask, “But why offer another Mass, and for so few?” Can’t people just go to the Masses already offered? I don’t follow the reasoning in that question. When I was in Arcadia, I started offering Mass in Spanish each Sunday because I noticed that there were a lot of Hispanic folks in town. I knew that Hispanics are overwhelmingly Catholic and I knew that I wasn’t seeing them at Sunday Mass. When I asked folks, “Why?” they simply said, “There’s no Mass offered here in Spanish.” So, I started offering one. We had about 25 people come each Sunday that first year. In less than 10 years, there were more than 250 people attending each Mass.

Priests are ordained to serve the people to whom they are sent. If they speak Spanish, I will offer the Mass in Spanish. If they have a love for the Traditional Latin Mass, I will offer the Latin Mass. And happily, in our diocese, there are those among my brother priests who have and do the same for those speaking Hmong.

It is at this point, whether it’s the Mass in Spanish or the Extraordinary Form of the Mass, people get concerned about the Mass becoming a source of division. I don’t understand that question either. If the Holy Sacrifice of the Mass is divisive, it is because fallen human beings try to use it as a means to a political agenda’s end. The Mass is NOT a means to anybody’s end but God’s! Pope Benedict XVI taught us that the two forms of the Mass are not in opposition but are an organic unity. If the two forms of the Roman Rite are not in opposition, then why should those who favor one or the other be in opposition?

I have found that with education, leadership on the part of the pastor and a little patience and charity on the part of all, the availability of the Mass in its various languages and forms not only serves the needs of those who initially and directly desire it, but it also opens doors of deeper understanding and appreciation between those who prefer or desire one language or form over another. Indeed, within my three parishes, it is not uncommon to find those who prefer one form over another attending Mass in whatever form is convenient, especially on holy days. The result has almost always been an appreciation for what that form of the Mass offers, even if the preference for the other remains.