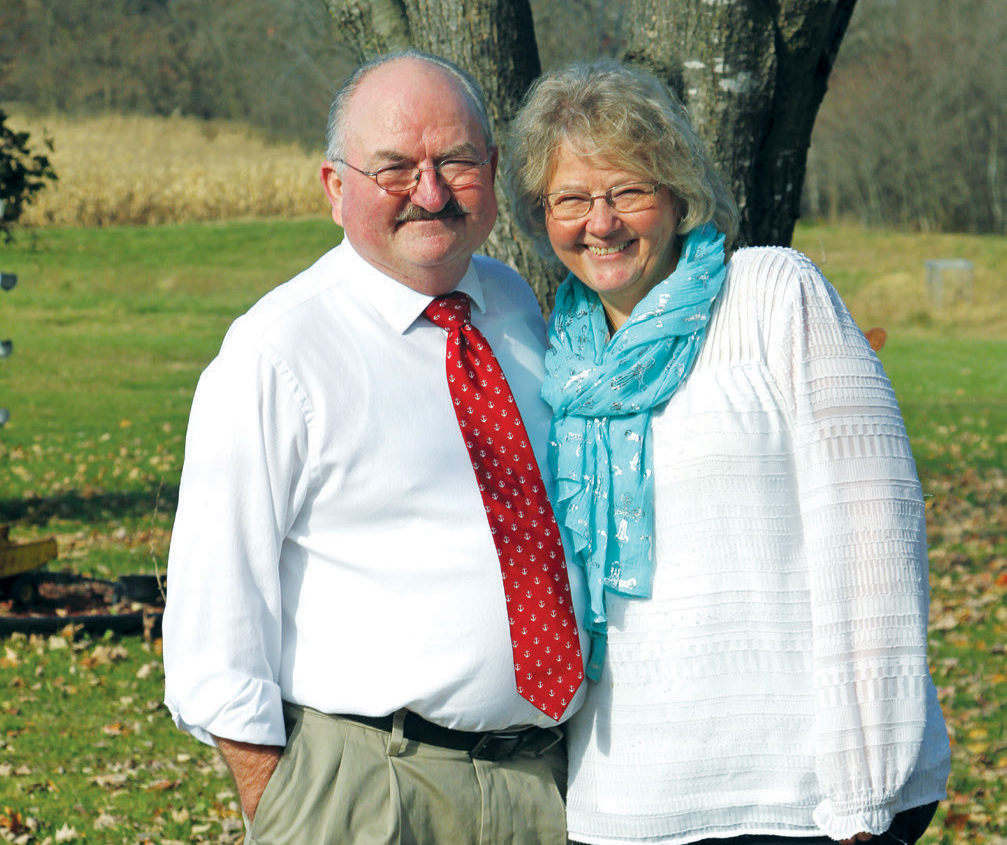 Just when we think we have a straight and level road in front of us, unexpected bumps and unmarked paths disrupt our journey. We can attempt to reach our destination by ourselves, but God reminds us He’s here to guide us through these detours. All we need to do is listen and follow His directions.

Bryce and Mary Lisowski of rural Alma traveled these unmarked roads and, though they never got lost, realized their destination is clearer when they let God be the driver.

As members of St. Lawrence Parish in Alma, Faith not only carried them through separate heartbreaks and tragedies during the first half of their lives, but brought them together in 2002 to conquer new challenges together.

Bryce and his six siblings grew up on a farm in Jahn Valley near Alma. By the 1970s, his father’s farm grew to 2,500 acres and 500 milk cows. His mother was a teacher at an area school. She was also the director of religious education and taught CCD at St. Lawrence Parish in Alma for many years. Faith bonded the family together. Attending Sunday Mass was a practice they held firm. Bryce continued in her footsteps and was the DRE in Alma for several years.

I didn’t like the idea that something so important to both of us as religion, was tearing us apart.”

Bryce attended St Mary’s University in Winona, Minn., majoring in mathematics and prescience. He applied to medical school and was accepted. However, marriage and family intervened. Bryce decided to continue working on the family farm to support his wife and growing family. After Bryce worked on the farm for 28 years, his dad sold the cows during the dairy buyout in the 1990s.

Bryce recalls, “After sending the cows to slaughter, we raised 330 sows and 2,000 pigs for a few years. But with the market price at 17 cents a pound, I was forced to get a job off the farm.” During this stressful time, Bryce and his first wife succumbed to life’s challenges and divorced after 13 years of marriage.

Bryce started working at Mondovi Implement, and then later took the United States Postal Service exam. After several years of working his way up from a postal carrier, Bryce is now the postmaster in Alma.

Mary and her six siblings were raised in Mondovi and active members of a Lutheran church located near their home. She married Dean Teigen and the couple raised their son and daughter in the Lutheran tradition. Mary continued to be active in the church, including reading and teaching Sunday School, just as her mother had done.

A month before Dean and Mary’s 25th wedding anniversary, their relationship was turned upside down. On the evening of July 3, 2000, Dean went to his workplace at Mondovi Implement to start the incinerator. Occasionally, Mary would go along, as she did that night. Dean ignited the contents inside the incinerator and turned away to shut the heavy door. Something went wrong, causing an explosion, throwing him through the air and against his pickup truck. The blast also threw Mary to the ground. She sustained minor injuries. However, Dean spent 17 days at St Mary’s Hospital in Rochester, Minn., before he died from his injuries.

“That’s when I felt my world had come to an end,” Mary recalls. “Before Dean’s death, I always wondered how people went through something like this. People always seem to be so strong during a tragedy. How can that be? … Well, I found out.” Mary believes she was strong during this time because God put up a shield to protect her.

“I read a lot of books, trying to deal with his death. I did more praying than I ever did and continued attending and reading at the Lutheran church.”

Bryce and Mary were faced with different challenges throughout the years before their chance meeting in December 2000.

“I was invited to the Christmas party at Mondovi Implement,” Mary recalls. “With Dean’s death earlier that summer, I didn’t want to attend. But I finally agreed to go with a couple that I knew. They gave me a ride to the party and later brought me home.”

At this point, Bryce had been divorced for more than a decade and was working at Mondovi Implement. He was also at the Christmas party. His meeting Mary that evening led to a great friendship. In March 2002, they were married in the Catholic Church.

Mary remembers their different faiths tested them over time. “For a while, we’d go to my Lutheran church on Sunday and Bryce’s Catholic church on Saturday evening. I couldn’t understand why we had to go to both.”

After time, Mary stopped attending the Lutheran church she was raised in, which was a large part of her life. “I resigned from the treasurer position that I held for many years and opted to just go to the Catholic church with Bryce.”

The adjustment was difficult for Mary. “Every time we’d come home from Mass, I was unhappy. I was crabby. We didn’t fight, but I wasn’t happy. I couldn’t understand why the Church was separating us.”

Throughout the years, Bryce continued his involvement with the parish and the Knights of Columbus. Presently he’s the diocesan coordinator. He was elected grand knight for two years, district deputy for six and was the special members coordinator for the State of Wisconsin for five.

In 2008, Bryce and Mary attended a KC bowling tournament in Green Bay. While there, they attended Mass. Mary thought, “Nobody knows me here. They don’t know I’m not Catholic. I’m going to show them I can accept the Eucharist just like they do!”

That’s when God intervened. The diocesan bishop was the celebrant, and something happened to Mary throughout Mass. “During his homily, his words, ‘You can’t put a period where God wants a comma,’ struck me. In the past, I had sworn I’d never be Catholic. But his words that day changed my mind. They changed my heart. I was put in that church for a reason. That was the moment I decided Bryce and I had to talk with a priest.”

Bryce was overwhelmed. “I never told her she needs to become Catholic. It was her choice.”

From there, Bryce and Mary attended RCIA classes together and Mary was accepted into the Catholic Church.

“The Lord has a plan and as our journey continues, our Faith becomes deeper,” Bryce comments. “We now feel the same about our Faith. I’m not afraid to talk with Mary about it.”

Mary believes, “We’re a lot closer now. I didn’t’ like the idea that something so important to both of us as religion, was tearing us apart.”

As active members of their parish, Bryce and Mary continue to share the richness of their Faith. Whether parish or finance council members, extraordinary ministers of holy Communion, lectors or volunteers at the parish annual fundraiser and other events, the couple will help wherever and however needed.

When they retire, their goal is to be a service to the parish. To help prepare for this, Bryce and Mary are currently going through the Lay Formation Institute program. Bryce would also like to become a Leader of Prayer. They believe when people live their Faith every day, there are so many opportunities to expand and bring the Lord to others.

God’s plan for them wasn’t what either expected. But Faith guided them through the bumps and unmarked paths in life and brought them together to overcome obstacles and journey together.

“There’s no perfect past. Our past is what’s made us who we are today.” Mary exclaims.

Bryce declares, “We’re not done yet!”