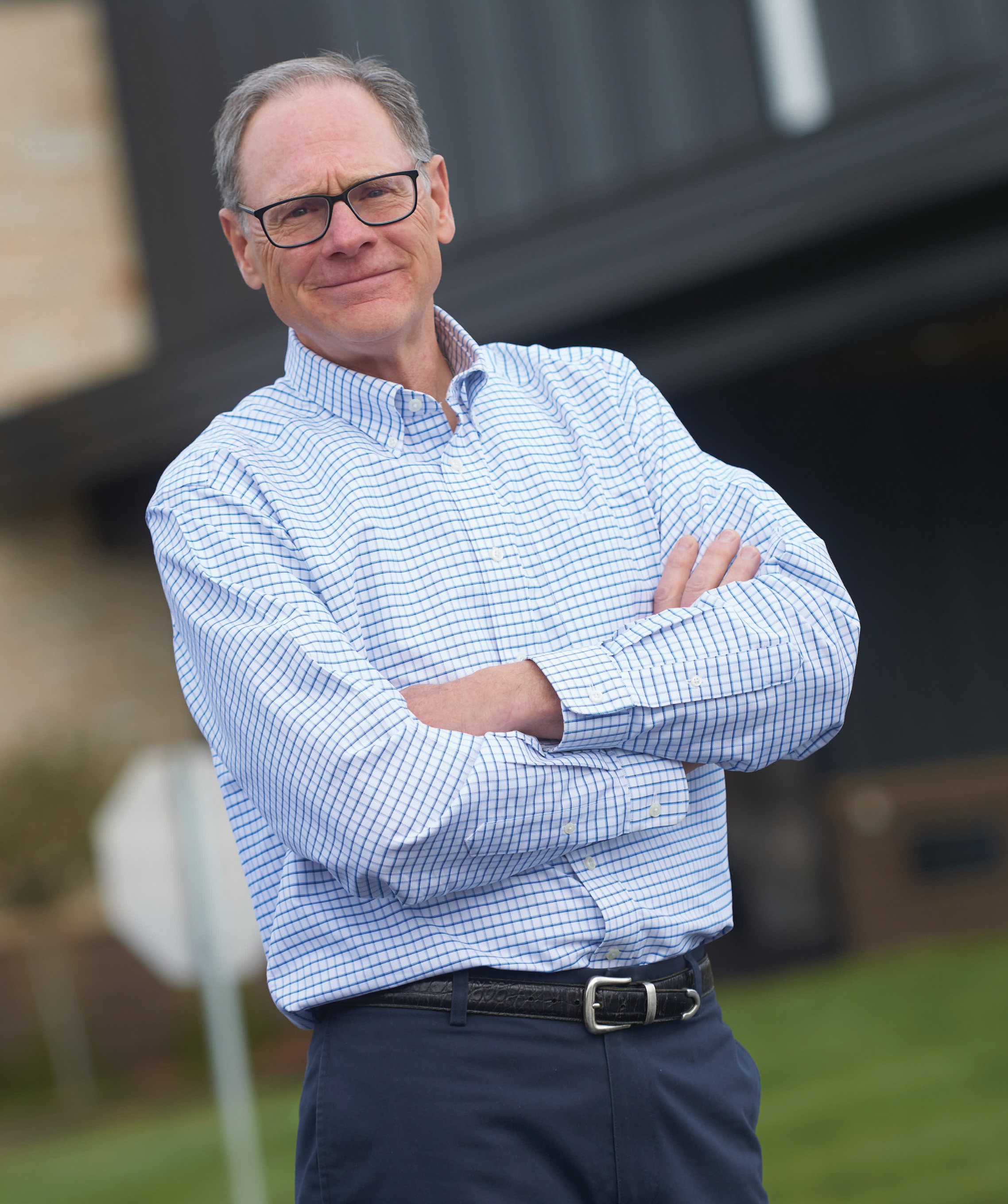 It had been a long time and I felt like the weight of the world had been lifted from my shoulders.

Mike Bourguignon of Wausau is a capable and hard-working man who also knows that God can help him get anything done better than if Mike does it on his own. That discovery helped Mike develop a relationship with his Heavenly Father and changed his life.

When he was eight, Mike’s 38-year-old father died of a heart attack. His mother was left to raise six children, including a baby born seven months after her husband’s death.

“I was the oldest boy,” says Mike. “I had to shovel snow, mow lawns and fix things. I had to figure stuff out. That’s how it was.”

Although his father was gone, his mother kept her husband close to the children. “She was married to Dad until the day she passed away at 97. She loved him and kept Dad present for us,” Mike says. “Mom was 40 and her hair turned from brown to white in the four weeks after Dad died. She raised us and just found a way. She told me, ‘If it weren’t for my Faith, I’d have wound up in the nuthouse.’”

His responsible and independent nature was shaped by his childhood, but there was a downside to being the guy who took care of everything. “As a young man, I did not practice my Faith well,” says Mike. “After Debbie and I were married in 1975, it was really not the most important thing on our list. When our daughters were born, we went to church on Sundays. That’s how it was for some time.”

I turned to God for help. What happened instead was my Faith started to grow.

Mike needed God in his life but didn’t know it, and it took something big to bring him home to his Father. “I took a regional sales job and was confident I would do well at it because in my position in retail I had to deal with sales guys. I knew from dealing with them I could do a good job at it,” he says. “Six months into it, in the spring of 1987, I was failing miserably. I hadn’t signed a single new account and I wound up one day in Peoria, Ill., in a two-bit hotel, in the middle of the afternoon, with nowhere to go and I broke down. I felt like I was beating my head against the wall. I’m sitting in this dumpy room and I wept. I can’t say why, but I picked up the Bible and started reading, and after a bit, I realized it was Holy Thursday. I found a church and went to Mass. Leaving after Mass, I turned around, went back in the church and asked to go to reconciliation. It had been a long time and I felt like the weight of the world had been lifted from my shoulders.”
The connection to God through forgiveness had an impact. Mike wanted God to help him with his job, but God wanted to give Mike even more.

“I was looking for answers to my career problems,” says Mike. “I am no quitter and knew I could do a good job. I turned to God for help. What happened instead was my Faith started to grow. I started reading a chapter a day and went through the Bible several times. I started praying Hail Marys to the mile markers on the interstate, which evolved into praying the rosary and attending a weekday Mass each week. Not all at once, because I don’t like change. So, I say God had to drag me along kicking and screaming. He was so patient with me. It just happened slowly. While I was getting right with God, my career took off.”

Invited to join a men’s Bible study, Mike agreed. Then he went deeper by participating in a “Life in the Spirit” class.

After he and Debbie arrived in Wausau in the fall of 2006, they looked for their new parish home, and joined St. Matthew in early 2007. Off the road and managing a local store, Mike was still able to attend daily Mass one day a week. “Then it became two or three days a week,” he says.

It wasn’t long before Mike was asked for help and said yes. “Father Bob urged me to join the Men’s Club. That worked out really well,” he says. “They are a great group of guys.”

One advantage to being part of the Men’s Club is when people need help in the parish, they turn to the Men’s Club. “I felt needed, and it was work or projects I was really glad to do,” says Mike.

Working with other Catholics in his parish has helped Mike on his Faith journey and allowed him to help others on their Faith journeys. “It’s personal. It’s a warmer relationship with God. I still have an awful long way to go to be the man God created me to be,” he says. “One of the best things I can do is to be an example for others. There are no limits to opportunities to help the parish.”

I started praying Hail Marys to the mile markers on the interstate.

Now retired with a handyman business, Mike has explored involvement within the parish in new and different ways. Asked to be an altar server for daily Mass, Mike put on the alb along with other men from the parish. “There is a group of about a half a dozen guys who serve weekday Masses,” says Mike. “I love the Mass, and have never felt closer to God than when serving.”

Mike has participated in the parish in many other ways. He has worked with the Men’s Club to make paczkis, helped with Christmas set-up and tear-down, worked to raise money for the parish’s Angelorum and helped with maintenance and building projects.

“I enjoy that stuff,” Mike says. “There’s always something to do at church and the parish needs the help.”

He wants others to feel the love God has shared with him. “I think if there’s anything, it’s attitude,” says Mike. “People ask, ‘How are you doing today?’ Now my response is more positive and in little ways like that, and in my work that I can bring Christ to others. A smile goes a long way. When we go to Mass, so many people want to remain anonymous. I just like to say, ‘Hi.’ Those little things can make people feel more comfortable, more a part of something and want to come back and give some of their time.”

Mike believes his journey of Faith would not have been possible without his wife. “Debbie has often sacrificed our time together when there is a need at church,” Mike says. “Without her love and support, I would not be going down this road.”

The opportunity to build a relationship with God and share his love with others transformed Mike’s life for the better. “I just wish it had happened earlier.” he says. “ But I wouldn’t trade my life for anybody’s.”