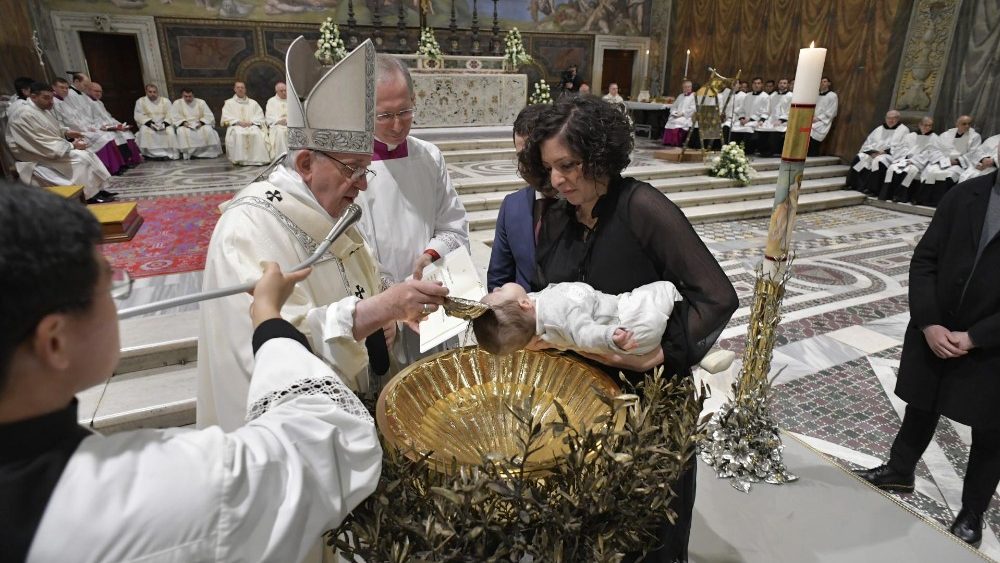 Baptizing Babies in Sistine Chapel, Francis Reminds Parents That Little Ones Must See and Know Jesus at Home

Pope Francis has reminded parents of their task: transmit the faith to their children. He stressed that they must do so with their own example, with their own life of faith, and not just through later studies at catechesis, but at the home, making their children see Jesus there and know Him.

The Holy Father repeatedly called for this today, Jan. 13, 2019, on the Feast of the Baptism of the Lord, during his homily. The Pope baptized, as is tradition, 27 babies (12 baby boys and 15 baby girls) during the Mass he celebrated this morning in the Sistine Chapel.

During the homily, he reminded the parents of the importance of passing on the faith to their children and the great responsibility it entails.

Recognizing how at the start of the Baptism ceremony, parents asked for the faith for their children, the Pope stressed: “this faith must develop. It must grow.”

Someone could say: yes, yes, they need to study it. Yes. When they go to catechesis, they will study well the faith. They will learn the faith. But before studying the faith, the faith must be transmitted, and this is a task that falls on you…

“This is your task: the transmission of the faith. And this you do at home, because the faith always must be transmitted in dialect, in the dialect of the family, of the home… This is your task, to transmit the faith with example, with words, teaching them how to make the Sign of the Cross. This is important.”

The Pope lamented that there are children who do not know how to make the Sign of the Cross.

“They do something like this [and the Pope demonstrated how some who have no idea of how to make the Sign of the Cross attempt to do it], and you do not understand what it is.”

For Children to See Jesus Is There, Is the Important Thing

The Holy Father also apologized for making a delicate suggestion, namely to not fight in front of children, nor let them hear. While he admitted quarreling here and there is absolutely normal in marriage, do not underestimate the effect this has on the little ones.

He also acknowledged the cries which resonated in the chapel, and recognizing that some of the babies could be hungry, reminded mothers to feel free to nurse their children as they normally would do.

Our Baptism: Keep Its Roots Alive, for They’re Roots of Our Eternal Life

During his weekly Sunday Angelus, after the midday prayer, he told those gathered in St. Peter’s Square how, for this feast day, as is tradition, he baptized a group of newborns earlier.

“We pray for them and for their families. And, on this occasion, I renew to everyone the invitation to always keep alive the memory of one’s baptism.

“There are the roots of the our life in God; the roots of our eternal life, which Jesus Christ gave us with his own Incarnation, Passion, Death and Resurrection.

The Holy Father noted that tomorrow, we return to Ordinary Time on the Liturgical Calendar.

“Like Jesus after his baptism, let us be guided by the Holy Spirit in all that
we do.”

To do this, we must invoke the Spirit, Francis reminded, praying: “Let’s learn to invoke more often, in our days, the Holy Spirit, in order to live ordinary things with love, and thus make them extraordinary.”

The Holy Father concluded, wishing everyone a Good Sunday and lunch, and reminding them to pray for him.

Deborah Castellano Lubov is Senior Vatican & Rome Correspondent for ZENIT; author of ‘The Other Francis’ (‘L’Altro Francesco’) featuring interviews with those closest to the Pope and preface by Vatican Secretary of State Cardinal Parolin (currently published in 5 languages); Deborah is also NBC & MSNBC Vatican Analyst. She often covers the Pope’s travels abroad, at times from the papal flight (including for historic trips such as to Abu Dhabi and Japan & Thailand), and has done television and radio commentary, including for Vatican Radio, Sky, and BBC. She is a contributor to National Catholic Register, UK Catholic Herald, Our Sunday Visitor, Inside the Vatican, and other Catholic news outlets. She has also collaborated with the Vatican in various projects, including an internship at the Pontifical Council for Social Communications, and is a collaborator with NBC Universal, NBC News, Euronews, and EWTN.