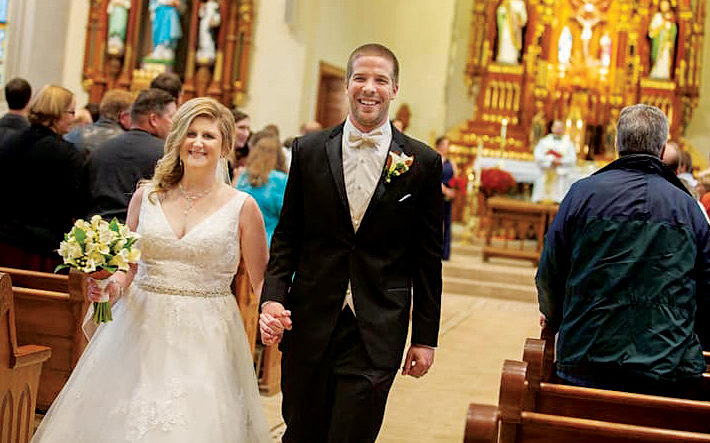 The beauty, dignity and prayerfulness of the Mass depend to a large extent on the music that accompanies the liturgical action. The Holy Mass must be truly beautiful, the very best we can offer to God, reflecting His own perfect beauty and goodness.
– Most Reverend Alexander K. Sample, archbishop of Portland, Oregon, in his pastoral letter “Sing to the Lord a New Song”, Jan. 25, 2019

Ashley Nikolai of St. John the Baptist Parish in Marshfield has always had a close connection to music, especially within the Church. Currently, she serves her parish as a cantor, but her music journey began many years ago while she was growing up in neighboring Auburndale.

Ashley attended St. Mary Parish and School in Auburndale, along with her brother and sister. She had a close-knit family growing up, always attending Sunday Mass together. Her parents modeled for and encouraged their children to volunteer and get involved in the parish from a very young age, a practice that has stuck even today.

Piano lessons became a part of Ashley’s life when she was in second grade, an activity she continued and enjoyed for many years. She also played in the school band. During elementary school, Ashley’s music teacher, Sister Hope, organized a group of singers representing each grade to sing at Christmas Eve Mass. “She called us ‘Songsters,’ Ashley recalls fondly, “and it was that group that originally got me to start singing.” In junior high, she was asked to help play the hymns for Easter, which was Ashley’s first experience playing at Mass.

Father T. Michael Schelble was Ashley’s parish priest at St. Mary Parish while she was growing up. “He always talked about sharing your time, talent and treasures,” she explains. “He said that the Mass was more beautiful with music. He also said that talent is a gift from God to be shared.” These words of wisdom stuck with Ashley as she began college and adult life.

During her college years at the University of Wisconsin-Stevens Point, Ashley joined a school choir, and on weekends she would come home to play piano for Masses and funerals at St. Mary Parish. It was also during her college years that Ashley met her husband Chris. The two were married in 2018 at St. John the Baptist. Ashley works as a dermatology technician and Chris is a machinist. Last June, the couple had a son, Maverick.

When singing at Mass, we take our worship of God to a higher level.

The Nikolais are transitioning to being a family of three and enjoying every moment. Music is expressed everywhere in their home. Ashley hopes to pass on her love of music to her son. She is often found singing to Maverick. “He gets a huge smile and occasionally a giggle when I sing to him,” Ashley shares.

When Ashley moved to Marshfield after college and joined St. John the Baptist Parish, she was continually impressed with the beauty of the music at Masses. She also recognized that they could use more musicians and immediately expressed her interest in helping. Ashley became a cantor with accompanist Karen Isaacson, who has since become a friend through all of their practice and Mass planning.

“The spiritual enhancement of music [at St. John’s] was most welcomed at the parish,” Ashley shares. “When singing at Mass, we take our worship of God to a higher level.”

The parish community at St. John the Baptist recognizes, as Pope St. Pius X says in 1903 and is reiterated in the documents of Vatican II, “Sacred music … is [for] the glory of God and the sanctification and edification of the faithful.”

“When the parishioners join in singing with us, it truly brings us such joy,” Ashley adds.

Through the years, Ashley and Karen, besides cantoring for weekend Masses, have provided music for many weddings at St. John the Baptist Parish. One of Ashley’s favorite memories of her involvement with parish music ministry was in July 2018 when she and Karen had the opportunity to provide the music for neighboring St. Michael Parish in Hewitt, when they hosted Bishop Callahan for a deanery Sesquicentennial Mass. During the Mass, the duo performed “Lead, Kindly Light,” a song commissioned for the 2018 La Crosse Diocesan Sesquicentennial. Bishop Callahan later asked them to record it for the diocesan sesquicentennial website.

Aside from the spiritual mentors she found at St. Mary’s—Sister Hope and Father Schelble—Ashley’s grandma, Elaine, played a special role in making the Faith both accessible and attractive to her. Her grandmother lived her Faith daily. She was a devout Catholic and attended daily Mass at St. Mary Parish in Greenwood, which she would bring her grandchildren to when they stayed with her. She was very active in her PCCW and sang in her parish choir. “She instilled in us the importance to live Faith by example,” Ashley explains.

“[Grandma Elaine] had a very special love for the Blessed Mother. I also have that love for Mary because of her influence.” Following this devotion, one of Ashley’s favorite hymns is the Ave Maria, which, just two days before her wedding, she had the great honor of singing at her grandmother’s funeral.

Ashley ends, saying: “[My Faith] will always be the most important part of my life. Participating in church activities helped me grow and have a deeper understanding of my Faith and the Mass. God calls us to share our treasure. Music is my gift from God and is a treasure to share.”

Elevating her work with sacred music, the constitution of the Second Vatican Council notes: “The musical tradition of the universal Church is a treasure of inestimable value, greater even than that of any other art. The main reason for this pre-eminence is, as sacred song is united to words, it forms an integral part of the solemn liturgy.”

Not only is Ashley’s work, and that of all sacred musicians, a part of the great treasury of the Church; Ashley’s gift is ultimately a part of the work of salvation. Pope Francis, speaking at an international meeting of choirs, said, “Liturgical and sacred music can be a powerful instrument of evangelization, because it gives people a glimpse of the beauty of heaven.”