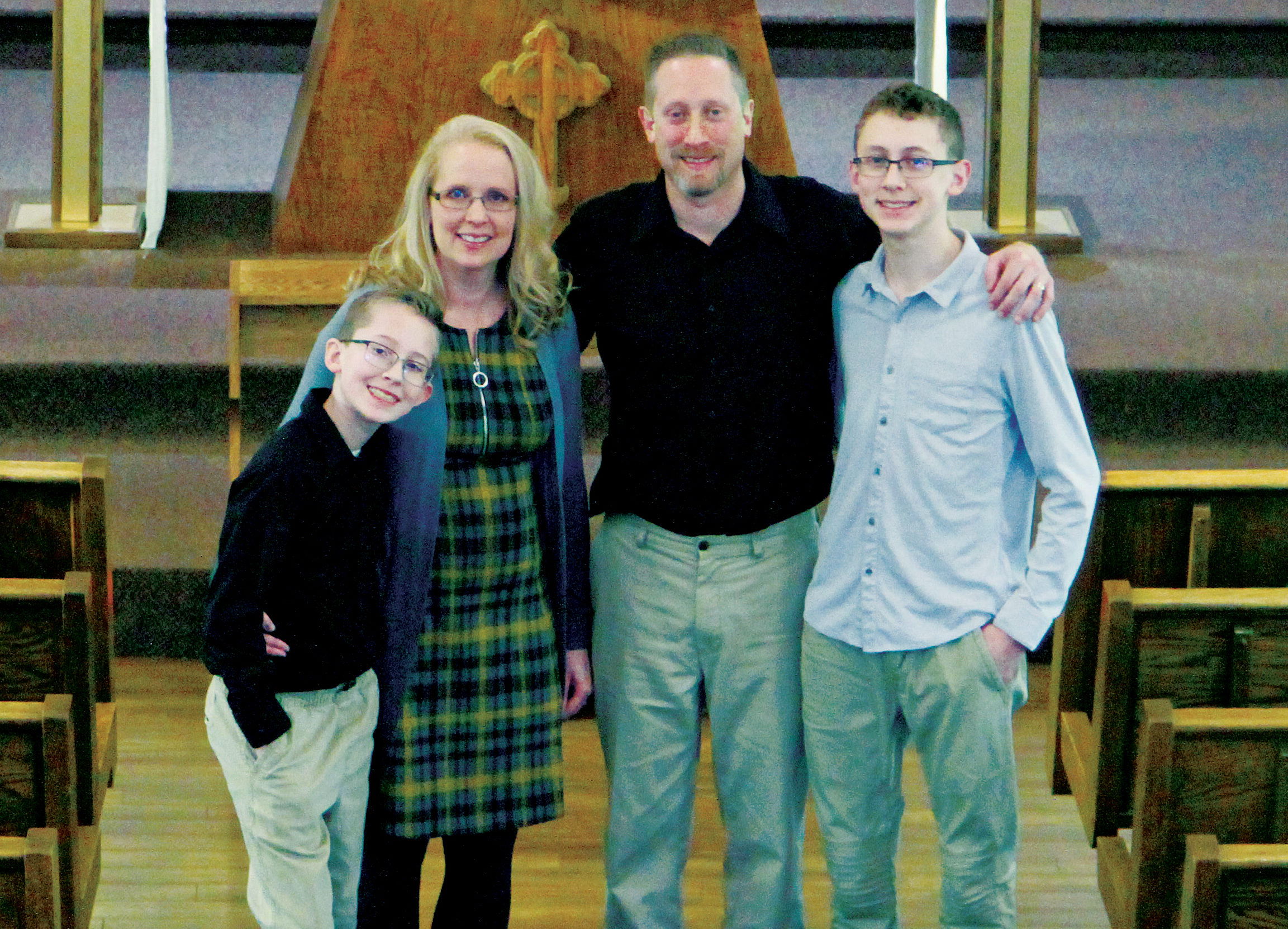 As parents, we aspire to guide our children, teach them right from wrong and set good examples they can learn from. But what happens when the tables are turned? It takes a special gift to open our hearts and minds to learn from our children.

Chris and Tracy Fischer are not only parents of two wonderful sons; they are blessed with the gift of wisdom to learn from them. They, along with sons Alex, 12 and Jon, 15, are members of Holy Ghost Parish in Chippewa Falls.

Tracy was born in Minnesota and adopted through Catholic Charities. She grew up in Cadott and was raised in the Catholic Faith. Chris also grew up in Cadott in the Lutheran tradition. Chris and Tracy met in high school and were married in 2000 at St Rose of Lima Catholic Church in Cadott.

Tracy admits, “I fell away from the Catholic Faith for quite some time. I didn’t attend Mass regularly, even though our boys were baptized Catholic.”

A transformation began when the boys started school.

The Fischers enrolled Jon in four-year-old kindergarten at McDonell Area Catholic Schools (MACS) because they heard it was such a great program. Their intent was to send him to the local public school after one year.

Tracy attended a parent meeting at the public school a month before the next school year was to begin. “I didn’t have the same feeling as I did about MACS. I didn’t feel comfortable sending him to public school.”

Chris and Tracy decided to have Jon continue attending MACS. “We never looked back,” Tracy recalls. “Because I wasn’t attending Mass regularly, I was happy he  was going to get exposure to  Mass every week.”

When Jon was preparing for his first holy Communion, Tracy attended a parent meeting. “It was made clear at the meeting that we, as parents, are expected to bring our children to Mass while they are going through the preparation process.”

We now sit down and eat together. Something as small as this seems silly, but it’s actually a big thing; we get to discuss our day.”

The instructor made a statement to the parents that, “If they want to raise Catholic children, she didn’t know why they’d want to go through the process if they weren’t going to attend Mass.” That statement really struck Tracy.

Later, when Jon was in fourth grade, he began volunteering as an altar server. Tracy began to attend Mass more frequently, to watch Jon serve. As time passed, she and their younger son, Alex, attended regularly. “I told Chris he might want to come because it was neat to see Jon serving. Chris didn’t know it, but it was about that time that I started praying to God. I asked God to open Chris’ heart and mind to the Catholic Faith.”

It was a multi-year process before Chris decided to convert to Catholicism. He was confirmed at the Easter Vigil in 2016. His two sons were altar servers at that Mass and Tracy was his sponsor.

Since his conversion, Chris agrees he’s been much happier. “We now sit down and eat together. Something as small as this seems silly, but it’s actually a big thing; we get to discuss our day. It’s also special when I’m in church sitting next to my wife.”

Employed as a social worker, Tracy represents Holy Ghost Parish on the Education Commission at MACS, in addition to other volunteer duties at the parish. “I feel the need to help in any way I can. That’s a part of who I am.” She is also a founder of the EPIC family group.

Chris is part of the Social Concerns Committee, gathering food for the local food pantry. He’s also active in the Men’s Group and Knights of Columbus and serves as an usher, lector and assists with the parish picnic or wherever he is needed.

Chris and Tracy’s sons are following their parents’ examples. Jon comments, “I have good friends that share the same Faith as me. It’s really nice to share this with my friends at weekday Mass, and then on the weekends with my family.”

They credit the decision to enroll Jon in MACS as the beginning in their renewal of Faith. Tracy believes, “Our children led us into becoming involved with the Church. In many ways, I feel God led our family through our children.”