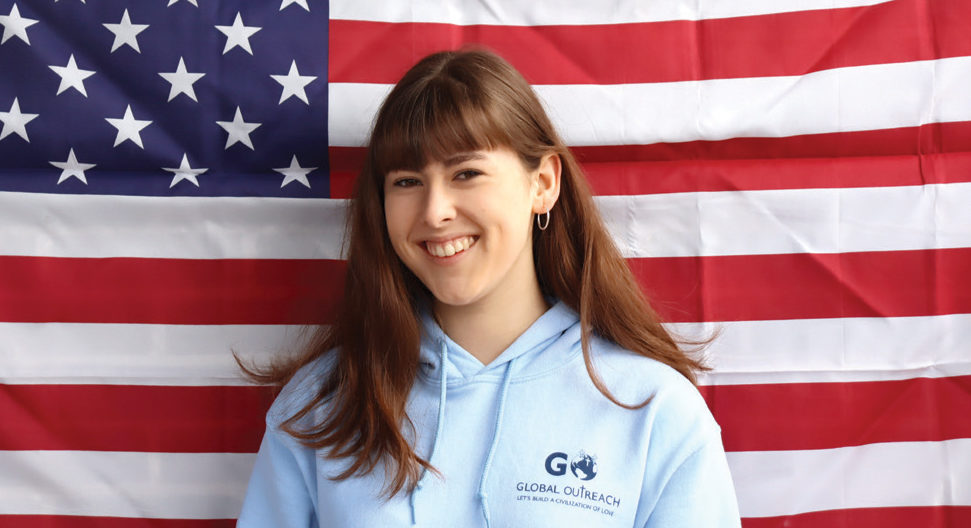 Picture this: You are living in a country you never imagined visiting and separated from your family during a global pandemic. Then, in an attempt to return home halfway across the world, you get stranded in another unfamiliar country and without a backup plan are refused clearance onto your final flight home.

Eighteen-year-old Hana Hrmova of Bratislava, Slovakia, found herself in this precarious situation a couple of short months ago. She is an exchange student with Global Outreach, a Catholic exchange program with a mission to build a civilization of love and raise young, dynamic, Catholic servant leaders. Students from former Communist European countries are given the opportunity to study  at Midwestern Catholic high schools.

Hana had been living in Stevens Point since August and attending Pacelli High School for the academic year. She was not scheduled to return home until June, when the school year ended, but the coronavirus pandemic cut short her experience abroad, as it has altered the lives and plans of us all.

Before Hana’s journey in the U.S. began, she was living in an apartment with her mother and attending high school in Slovakia, where she had lived her whole life.

It has always been just Hana and her mom, Renata, a television costume designer. When Hana was born, her mother wanted to have her baptized, but since Renata was not a practicing Catholic, the priest would not allow it. So Hana’s grandmother approached her own pastor to ask if Hana could be baptized into the Church if she took spiritual responsibility for her granddaughter. The priest agreed.

“I accept the whole year as God prepared it for me.”

Growing up, Hana spent a lot of time with her grandmother, as her mother worked. While she was with her grandma, Hana was expected to attend Mass with her and participate in her devotions. But when Hana returned home, there were no such expectations.

As a young teen, Hana disliked the Church and saw Mass as a boring obligation. But when she was 14, something happened that changed her life dramatically. Hana’s cousin had a daughter and asked Hana to be the godmother. The priest agreed only under the condition Hana make preparation for confirmation and receive the sacrament as soon as possible. Hana became a godmother but struggled to find motivation to begin confirmation preparation. Hana’s mom insisted she keep the promise.

Hana hesitantly enrolled, but being a self-proclaimed perfectionist, she wholeheartedly embraced the points system that was in place for her preparation, including signatures for weekly Mass attendance and volunteering within the Church. These opportunities opened Hana up to the Faith and deeply changed her heart. Even though there were seeds planted by her grandmother and her Catholic religious education, which is a part of public schooling in Slovakia, the turning point in her life was the promise she half-heartedly made to assist with the spiritual responsibility of her goddaughter, Karin.

After confirmation, Hana was on fire for the Faith. She wasted no time learning what she could about the Church and establishing a prayer life, even though she was alone in her efforts at home and school.

Hana describes the Catholic Church in Slovakia as very traditional, reverent and strong because of its previous persecution under Communist rule. While she admits the numbers may be declining, those who do practice have a very active and living Faith. Also, there is no separation of church and state in Slovakia as we know it in the U.S.

The many Slovakian saints and martyrs are a great inspiration to Hana, who takes pride in her home country. “I have never wanted to leave Slovakia,” Hana admits. “I have my heart set in this country, to serve and to see the Kingdom of God here.” She has been discouraged to see so many young people, especially young Catholics, leaving Slovakia, which made her all the more set on staying to make a difference in her homeland.

As a part of her prayer routine, Hana journals with the Gospel each day. The message of Jesus sending His disciples out to preach the Good News kept appearing and sat heavily on Hana’s heart. She began to question the possibility she too was being called.

One Thursday in August 2018, Hana was sitting in the waiting room of her eye doctor when a message on social media caught her eye and spoke to her heart: “You call me to lose everything to give me everything.”

The next Sunday, at her parish, she unexpectedly ran into her English teacher, who is the coordinator for study abroad programs. Hana had never seen her there before but took it as her opportunity to talk to her about the call she had received. Her teacher recommended a Catholic exchange program, and Hana agreed to take it to prayer.

Knowing she was feeling called to study and serve abroad, Hana still couldn’t keep the doubts from creeping in. How could she leave her mom alone or miss a year with her young goddaughter or her friends? But when the doubts began to subside, Hana followed the Lord’s difficult prompting and submitted her application for Global Outreach. She agreed—if she was selected—to go to the U.S., which Hana calls: “The last place I would choose to go; a place with so different a culture than my own.”

Hana’s application was accepted. After her interview, she was chosen to represent Slovakia in the U.S. for the 2019/2020 school year. As she waited to be matched with a host family, Hana prayed for them daily. On Easter Monday, 2019, she was matched with the Shulfer family, who are parishioners of St. James Parish in Amherst.

Gary and Michelle, both academic staff at the University of Wisconsin-Stevens Point (UWSP), had never hosted an exchange student before. They were contacted by Larry Theiss, principal of Pacelli High School, who asked them to consider hosting Hana. He felt Hana had a lot in common with their young adult daughter, Theresa, who was living at home and studying at UWSP. The Shulfers had a family meeting and all four, including their son Tim, agreed they were ready to open their home to Hana and embark on the adventure of becoming a host family.

Hana arrived in Wisconsin in August. She had a week of orientation with Global Outreach before joining the Shulfers in Stevens Point. Upon meeting them, she felt the close connection grown through her prayers. Hana sums up her experiences preparing to come to the U.S. and her whole journey here as an experience of walking on water—keeping her eyes firmly fixed on Jesus as He led her through unfamiliar waters. Each day was an exercise in trust and abandonment.

Hana and the Shulfers agree some moments were difficult, and there was a time of transition, but overall there were far more joyous moments! Michelle says, “Hana is Faith-filled, intelligent, incredibly kind, polite and helpful. She always seeks to do God’s will and serves others joyfully! Hana inspired spiritual growth in all of us in one way or another.”

For Hana, it was her first experience of life with a full family—having a father, siblings and a religious mother. She formed a special bond with Gary, who became the first father-figure in her life. Little did Gary know the Lord was calling him to fill this most foundational role when he opened his family’s home to Hana.

Hana vividly remembers her first Sunday in Wisconsin, attending Mass at St. James with the Shulfers. It was her first time not attending Mass alone in years. Sundays also brought another favorite tradition: brunch at Grandma Shulfer’s farm after Mass, which Hana remembers fondly. Suppers around the dinner table with the Shulfer family were especially meaningful and memorable, as well as family games, movies and bonfires. Hana also enjoyed the traveling they did, including a farewell trip to Holy Hill when she found out her stay was being cut short. Her stay with the Shulfers enkindled in Hana a deep joy that had been missing for some time.

It was in the quiet moments of her heart through which God spoke truth to her. These were the most significant experiences of her stay—the witness talks she gave in Wausau, the TEC retreat she made and friends she met. Hana recognizes each experience was used for her growth, explaining, “I accept the whole year as God prepared it for me.”

In fact, a few weeks before there was any indication of a global pandemic, Hana felt the Lord preparing her to say goodbye. She somehow knew her journey in the U.S. was coming to an end, but she didn’t fully understand why until mid-March when schools and countries’ borders began closing. Global Outreach gave students the opportunity to return home early given the uncertainty of the situation. Hana corresponded with her mother and they went back and forth, but ultimately, they decided it best for Hana to return to Slovakia.

Hana’s final week was a trying time of goodbyes, making travel arrangements and wrapping up her stay. She departed from Chicago and flew to Dublin on Sunday, March 22, where she was to catch a flight to Prague. She and other Slovakian citizens were denied clearance to fly to Prague, despite the Slovakian Embassy pleading their case, as borders had recently been closed. As a result, Hana ended up stranded in Dublin for nearly two sleepless days. Finally, she was able to fly to Vienna, where she took a taxi to the border. Her mother met her there and brought her home to a mandatory 14-day quarantine.

Relieved to have made it home, Hana remains healthy. She has been enjoying time visiting with her mom and celebrating—as much as possible during this time of worldwide quarantine—the Easter joy and promise. “My journey to America was dying to self,” Hana explains. “Every death leads to new life. Like now in Easter, I know from this death new great life is coming.”

If your family would consider the adventure of opening your home to a host student like Hana or would like more information, contact Barbara Tota-Boryczka, executive director of Global Outreach Catholic Exchange Program, at [email protected] or call 920.540.3085. As you consider, Hana asks you to remember: “God doesn’t call the qualified. He qualifies the called.”