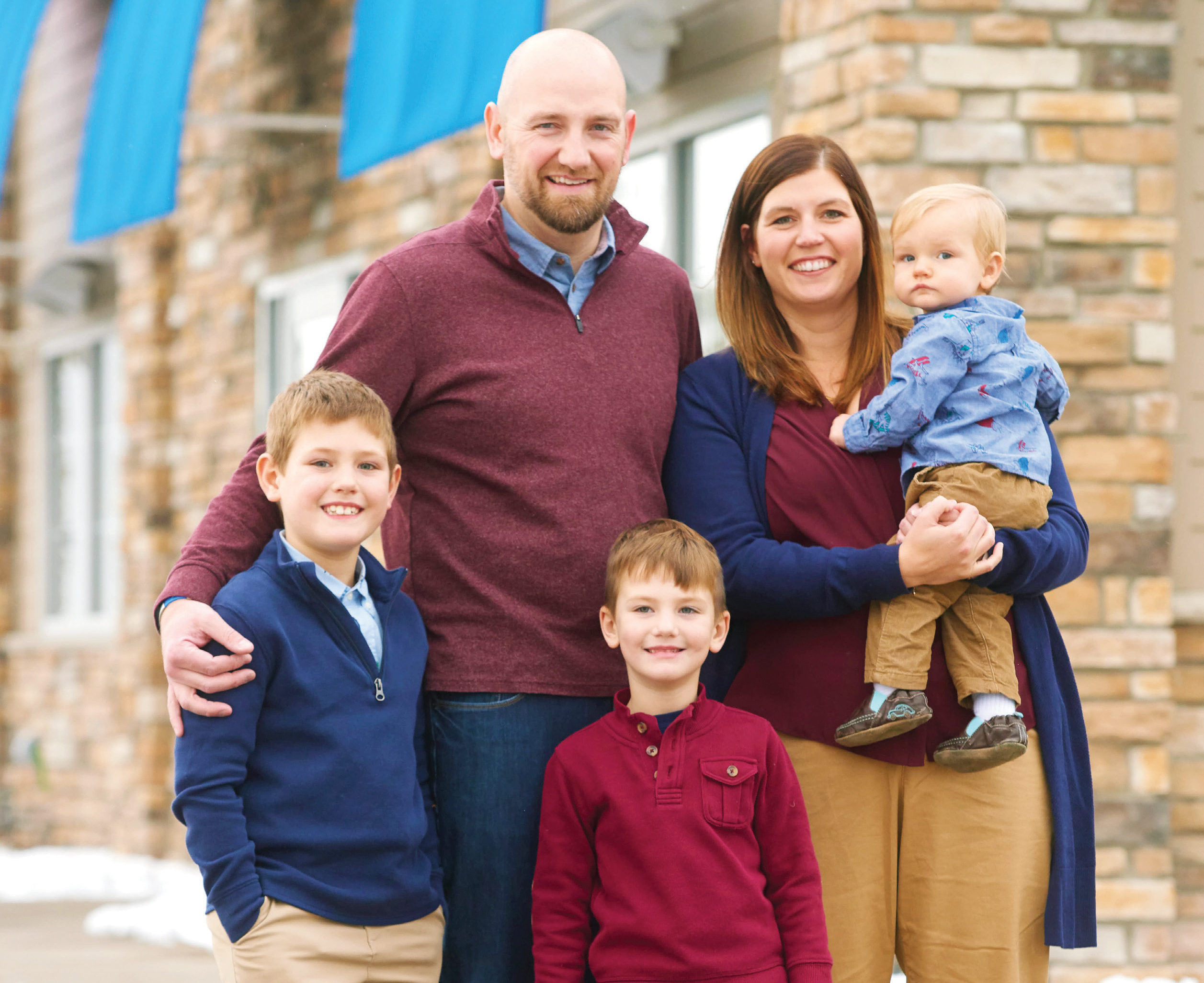 Jake & Emily focus on service before profit in business

Jake and Emily Bowe of Onalaska understand the importance of serving others, following Christ’s message in the New Testament. His command is something they carry out every day in the two restaurants they own.

Jake has worked in Culver’s Restaurants since he was 14. “It’s a family business for us,” Jake says. “My dad grew up on a farm, my mom grew up in a farming community. They have the mind-set of leaving things better than how they found them. Our family has a group of 12 restaurants. We always ask ourselves, ‘What is the right thing to do?’”

While Emily has not been as involved with the day-to-day operations of the restaurants since becoming a stay-at-home mom for the couple’s three young boys, she is a valuable part of the business. “I used to help run the restaurants,” says Emily. “My background is in human resources. I predominately work at home, but I still help make decisions.”

Emily continues to be a valuable partner for Jake. “She has a different perspective than I do,” he says. “Emily is definitely in and around, and we work together as a team.”

Jake and Emily use their Catholic Faith in most aspects of the restaurant business. The focus begins with their team members.

The parent corporation encourages community interaction and support, allowing Jake and Emily to cultivate a culture of service for their restaurants as well as with their team members. “One thing about Culver’s is the focus on small-town values,” Jake says. “That’s why my family got into Culver’s. The company highlighted being part of the community. We want to be a place where people gather.”

Fundraisers are a part of the restaurant business. When the weather gets cold, patrons can drop off coats and gloves for the warming shelter in La Crosse.

Food collected through food drives is donated to different local organizations, and those donating receive a coupon for a free menu item as a thank you. The restaurants support the local Special Olympics by participating in the Polar Plunge.

“We do Miracle Mondays in November and December,” Emily says. “A percentage of the sales on those days is donated to our local Children’s Miracle Network Hospital.”

“We give quite a bit to Catholic Charities, the Catholic Worker House called A Place of Grace and to benefit children through area schools,” says Jake. “That’s what we are most passionate about. We can feed people.”

The couple’s passion for service has positively influenced their team members. “Our most recent endeavor with the restaurant is providing a meal at the Place of Grace in La Crosse,” Emily says.

“A group of our team members wanted to get more involved,” says Jake. “We are probably going on almost two years of providing a meal a month.”
Team members from the two restaurants do all the work. Approximately five to 10 people work at the house each month, with more than 30 people volunteering.

The meal is prepared on site. “It’s a very small kitchen,” Emily says. “Most of the house is for seating. Every time we prepare a meal, it is different.”
After attending a speaker presentation at Viterbo University in La Crosse, Jake was inspired to enroll in the university and get a master’s degree in servant leadership. Emily and Jake saw a wonderful opportunity to expand their understanding of bringing service into the business and their lives.

“Tom Thibodeau is a really dynamic teacher who started the program 20 years ago,” says Jake. “I like to learn from him. He has a great outlook on life. He’s worked for Viterbo for 30 years. He’s a Catholic man who raised a family and was one of the founders of Place of Grace. He’s really looking out for everybody. He sets a great Catholic example.”

Jake’s studies have already carried over into his work with the restaurants, encouraging him to think deeper about everything he does. “We gather input from our team and leadership when we make decisions. We try to do what’s right for everybody,” he says. “Servant leadership is about taking care of people’s needs not their wants. The idea is to balance needs and wants to benefit everybody.”

Jake also turns to Catholic and Christian speakers for inspiration about business and Faith. “I really have learned a lot from Dave Ramsey. One thing he talks about a lot is everything is God’s and we are stewards of it,” says Jake.

Father John Riccardo and Matthew Kelly are favorite speakers and seeing Steve Ray at the Diocese of La Crosse Men’s Conference in October 2019 was especially inspiring. “I’ve been reading and listening to him,” Jake says. “My Faith is a journey. I’m more excited now than I ever have been. There are a lot of really good resources out there.”

We gather input from our team and leadership when we make decisions. We try to do what’s right for everybody.” – Jake

Jake and Emily had the opportunity to make a pilgrimage to Assisi, which made an impact on them, encouraging a desire to stay engaged with the Catholic Faith. The pilgrimage helped them to better connect with the teachings of the Church.

Being educated in the Faith is important to both Jake and Emily and they work to model the right focus and attitude for their sons. They each learned about faith from their parents—Jake in the Catholic Church and Emily as an Episcopalian.

They grew together going through the RCIA program before they married. Now they are bringing up their three sons in the Catholic Faith at St. Patrick Parish in Onalaska.

“The best thing you can do is lead by example,” says Emily.

“Catholic Faith starts in the home,” Jake says. “Praying is a big thing. We have conversations about saints of the day or read stories out of the Bible. We talk to them about making good choices and helping others.”

Talking with their children about how lucky they are to go to Mass every week is one way Jake and Emily remind their family that having Faith is a blessing. “This is a great opportunity that not everybody has,” says Jake. “Life is short and there are a lot of places that aren’t as free as we are to practice our Faith.”