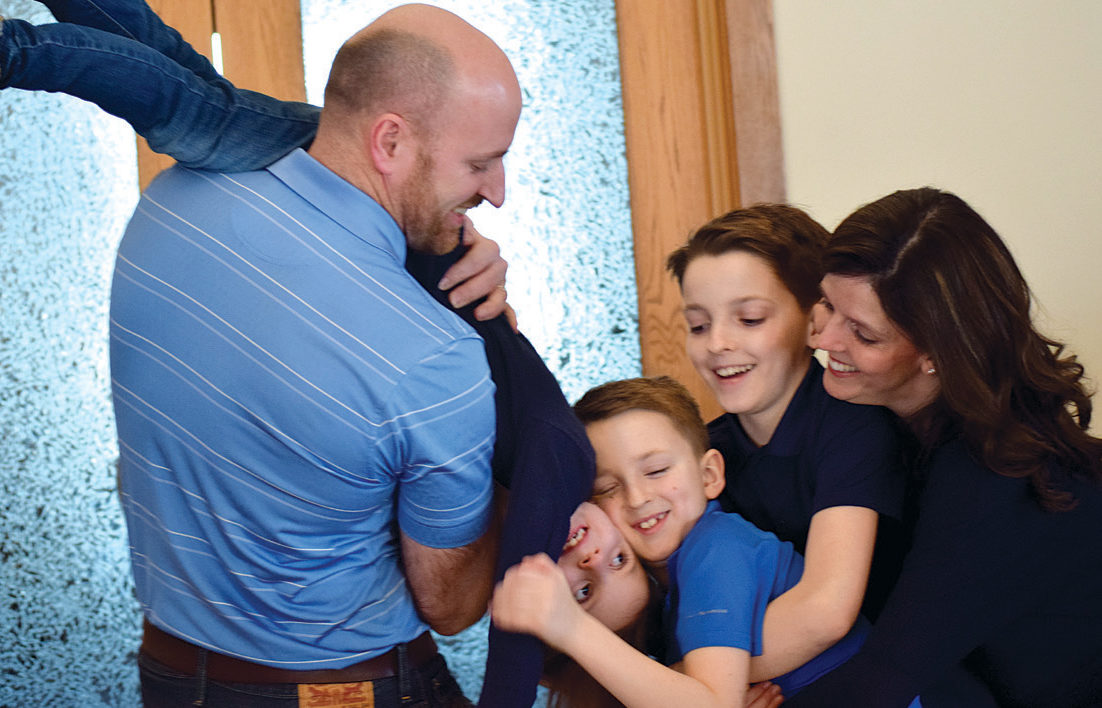 For Scott and Carrie Dreger of Custer, parishioners at St. Maximilian Kolbe Parish in Almond, service has always been a part of their lives. From their younger years, serving beside their families, to today, serving beside their children, the Dregers recognize and embrace their role of service as lay faithful within the Church.

Scott and Carrie both grew up in Wisconsin—Scott in Menominee Falls and Cambria, Carrie in Neenah. Scott’s family were vegetable farmers and began dairy farming when they moved. He and his three brothers had many chores and most days spent two hours working before getting on the school bus at 7:30 a.m.

Carrie is the third of seven children, having five sisters and a brother. She loved growing up in a big family, as there was always someone to play with.

Neither Scott nor Carrie had a glamorous childhood, but what they lacked in luxury, they gained in memories, lessons and examples of Faith. Both sets of parents modeled for them the importance of consistent weekly Mass attendance; not just being there, but serving.

I relate to Mary as a mother. I turn to her often and ask for her intersession when I’m struggling as a wife or mother.”

Scott was an altar server alongside his brothers. Carrie cantored while her family sang in the choir. From these earliest experiences came a lifelong desire to serve. “My family sang at the 10:30 a.m. Mass every other Sunday from the time my youngest sibling was a toddler until my second-oldest sister graduated from high school, roughly 10 years,” Carrie shares. “Both parents played guitar and the rest of us sang along in harmony. It was through this experience that I learned the importance of sharing the gifts we have. There were many times I recall parishioners or parish visitors thanking my parents for helping make their experience of the Mass that much more enjoyable. With a large family, my parents didn’t have time or resources to be involved in many things outside the home, but they were able to serve in this very special way. And for that, I am thankful.”

Scott and Carrie met while they were attending the University of Wisconsin-Stevens Point. They were both involved with the Newman Center, where Scott continued to be an altar server and Carrie a cantor and catechist. But it wasn’t until their last year of college that they began spending more time together with a couple of mutual friends. Scott and Carrie began dating at the friends’ wedding and after only five months they became engaged; they married 11 months later. The couple has now been married for 13 years and continues to grow in their love and commitment.

Their love is witnessed in their three children: Dirk, (11) Henrik, (8) and Matilda (7). Together, the Dregers enjoy traveling, swimming, hiking and Wisconsin sporting events. They also enjoy the opportunity to serve together at their parish, encouraged and inspired by their pastor, Father Peter Manickam. Dirk is an altar server and Carrie cantors, often with her kids at her side.

The memorial cross in the parish’s meditation garden. Scott and Carrie helped make the garden when they were engaged.

Early in their marriage, Scott and Carrie used their schooling in finance and business as well as their careers at Sentry Insurance to put their skills to work. They counted the weekly parish collection, assisted with the church finances at a time when St. Maximilian didn’t have a secretary and Carrie has served several terms on the Finance Council. When Scott learned about the life-changing Dave Ramsey course, Financial Peace University, he brought it to his parish and neighboring St. Bronislava with the help of Carrie, motivating many to take control of their finances.

Outside of their parish involvement, the Dregers have a family match with a third-grade boy in their community through Big Brothers Big Sisters. Carrie and Scott explain that this is “a way for our kids to focus on someone other than ourselves, especially someone in a tough situation.”

As a mother, Carrie has a special devotion to Our Lady, one that unites her family and was strengthened with the premature birth of Matilda. Carrie had recently learned the Memorare prayer and found herself frequently turning to the comforting words during the difficult time, especially when she and Matilda were recovering in separate hospitals. “[The Memorare] brought me complete peace as I submitted Matilda’s fate to God. I relate to Mary as a mother and I know that if I love my children as much as I do and yet Mary is without sin, her love for Jesus must be even greater. I turn to her often and ask for her intersession when I’m struggling as a wife or mother. I trust her to bring me closer to her son.”

Their family-focused service and parish involvement give the Dreger family the opportunity to make memories and meaningful connections. One especially meaningful contribution they helped to make a reality at St. Max’s is a memorial cross for Father Dan Farley, the pastor who was instrumental in unifying four small rural parishes into one, namely with the building of St. Maximilian Kolbe Parish. It was not an easy road, but Father Farley worked tirelessly to bring everyone together, even amidst his battle with ALS, which ultimately took his life. “Father Dan was very well loved by his parishioners and the community, and there was a huge outpouring upon his death of funds towards a memorial. After many discussions and several years, we finally agreed upon a simple Celtic design, with a symbol of the Holy Spirit and at the base of the cross is the inscription, ‘Now let us place ourselves quietly in the Lord’s presence, asking for the graces we need to grow in ever closer union with Him,’ a phrase with which he was known for always ending his homilies.

“The memorial cross was placed in our meditation garden, an ideal place for someone to do just what Father Dan suggested. This place is special to Scott and I personally,” Carrie shares, “because we helped make that garden when we were engaged. We had attended a Mass where Father Dan appealed to able-bodied people to come help dig out the garden. We liked the parish so much and were thinking of joining that we decided to show up. I remember Father Dan meeting us that day and being pleasantly surprised that we were helping out even though we didn’t yet belong.  Meeting some other parishioners that day and working alongside them and Father Dan felt so right. And we haven’t left the parish since.”

In his 1988 Apostolic Exhortation Christifideles Laici, Pope St. John Paul the Great tells us that every person—ordained and lay—has a part in transforming the world by taking “an active, conscientious and responsible part in the mission of the Church.” The Dregers have taken up this call. Young Dirk shares: “In participating in church activities, I am helping people feel special and feel like they are a part of the Church. I like to serve at the altar because I get to see God up close.”

In response to this mission, Carrie shares, “The thing I’ve come to understand about my Faith and my place in the Church is that I’m on a journey. And my part in the Church’s mission as a teenager was different than what it was in college and has changed throughout my married life. The key for me is recognizing my talents and finding a way to share them.”

“By listening to the word of God through our Church, we can find opportunities to give time to the Church, utilize our talents for the better of the parish and parishioners and be generous in giving of our treasure,” Scott adds. “And as a family, we try to keep an open mind and ear to what God is calling us for.”