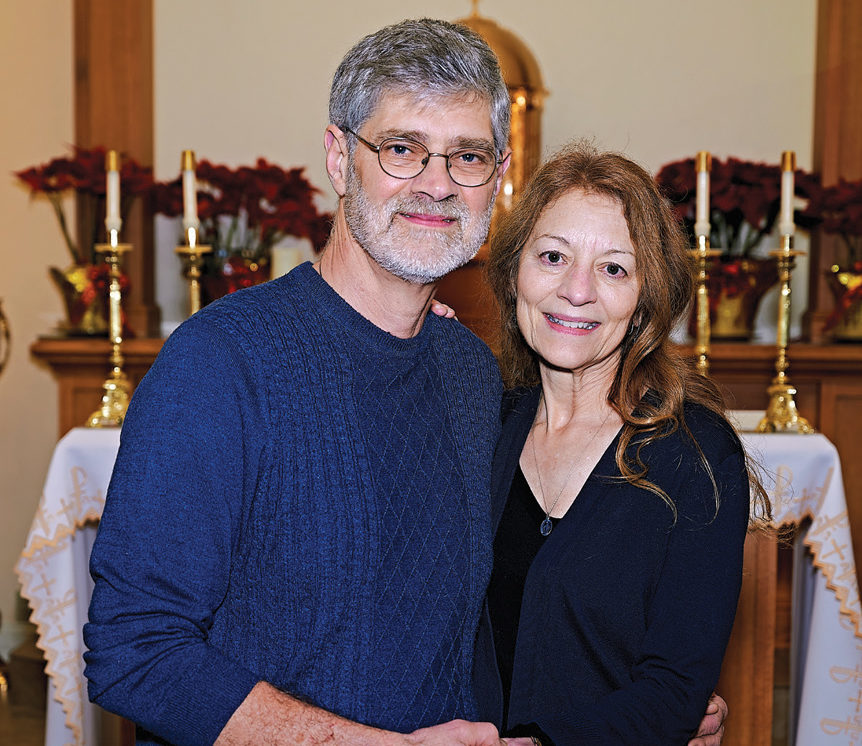 Jim and Deb Sniadajewski love music, and they freely share that love with others. “Music had always been one of the areas we had served in: Either singing in choirs or directing choirs,” Jim said. Deb added that she enjoyed singing in high school choir and playing guitar. She also recalled that they sang with Monsignor Joe Hirsch and Heartstrings. Jim was quick to add that happened “many years ago.” Jim and Deb had always been involved in the life of the Church, mainly through sharing their gift of music, beginning when they were married 42 years ago.

Shortly after they were married, Jim and Deb felt the need to serve in the parish community beyond their music ministry. At the time, they were members of St. Bronislava Parish in Plover. “We did some [work with] CCD or religious formation programs. I remember us doing, not exactly like the Theology of the Body, but similar kinds of things for the grade 9-11 group about the Christian Catholic attitude to dating,” recalled Jim. The Theology of the Body is Pope St. John Paul II’s integrated vision of the human person.
As time went on, Jim and Deb had children of their own, who demanded their time. Consequently, involvement with parish ministries waned, although they still continued their music ministry.

Later on, they discovered the sport of mountain bike racing, which consumed even more of their time. “All of a sudden, we missed going to church on a Sunday and then another Sunday missed. We had never done that before. The races were always held on Sunday,” said Jim.
This pattern continued for a few months. At one point, Jim remembered Deb saying, “Jim, I am not doing this anymore. If we can’t go to church, then I am not going to race.” Jim had been feeling the same way, but it wasn’t until Deb voiced her feelings he realized a decision needed to be made. “Deb was bold enough to make that decision. From that point on, if we could not attend Mass, we would not race,” Jim said.

“As I look back, I see plateaus [in my faith and in my ministry] and then something happens that causes me to step it up–to do more and to deepen my faith.” – Jim Sniadajewski

That decision revitalized their Faith. They understood being part of a community of believers was all important in their lives. Going to Mass was something they did not want to forgo. Deb and Jim, as a “sponsor couple,” met with couples who were preparing for marriage and invited them to their home. They helped future spouses develop a better understanding of the sacrament, evaluate their readiness for married life and gain insights about themselves as individuals and as a couple.

Jim said, “As I look back, I see plateaus [in my Faith and in my ministry] and then something happens that causes me to step it up—to do more and to deepen my Faith.”

A pivotal moment in Jim’s life occurred after a move from the Plover area 13 years ago to a home very close to St. Mary of Mount Carmel Church in Fancher. It was there he encountered Father Ray Pedretti. With emotion, Jim recalled his experience, “[Father Pedretti’s] demeanor … when he was at the altar or in the sanctuary or at Mass any day and every day, you could tell that he had this strong, more than I have ever seen, belief that Jesus was present in that tabernacle. It caused me to think, what am I doing coming to Mass. Really…what do I believe?”

Father Pedretti’s retirement ushered in a time when a sequence of international priests were assigned to St. Mary. Jim and Deb could see the strain on these priests, who, without complaint, were trying to manage multiple parishes both pastorally and administratively. They wanted to do something to help them out. But what could they do?

Deb recalled the time that Father Jude was at St. Mary and also was responsible for two other parishes. “In the back of my mind, I always thought Jim was called to be a deacon, but he did not see it at all,” said Deb. Continuing, she said, “He looked at the program and said, ‘Wow, that’s a lot [of work]. But, you know, we could go to the Lay Formation Program.’”
Urged by their desire to help their pastor and parish, Jim and Deb enrolled in the Lay Formation Institute (LFI). LFI is a two-year program where participants get to draw closer to Christ and to His Church, to deepen their understanding of their Faith and to become an active and joyful disciple in their parish and community. Deb said, “I recommend this program to anybody, even if they do not want to serve in leadership roles. We came back on fire.”

Deb and Jim completed the LFI program, which allowed them to engage more fully and to help more completely in their parish programs. They became leaders of prayer, oversaw the training of extraordinary ministers of holy Communion, became the coordinators of the deanery marriage preparation program and have recently become RCIA facilitators, among other activities.

As their Faith and commitment to the Church evolved and deepened, Jim reflected back and he recalled, “Even while I was in the Lay Formation Institute, people would come up to me and say ’you would be a great deacon.’ And so, I would pray about this, but I was really convinced that, at the time, I was called to be a really involved lay person. I wanted to be that kind of lay person that the Church envisioned. A person that is very involved.”

As time passed, Jim’s thoughts returned to the diaconate. He said he felt this gnawing feeling about whether he was truly being called to be a deacon. Eventually, the call became so strong that he decided to explore it further. He attended a weekend retreat at St. Anthony Spirituality Center to learn more about the diaconate.

Perhaps Deb could sense Jim’s calling before he could realize it himself. Others had sensed it too. Eventually, through prayer and discernment, Jim decided to answer the call and is currently in the Deacon Formation Program, which is five years in length: two years as an aspirant and three years as a candidate.

Jim and Deb continue to live their faith in service to the life of Immaculate Conception (St. Mary) Parish in Custer, where they assist Father Alan Guanella.