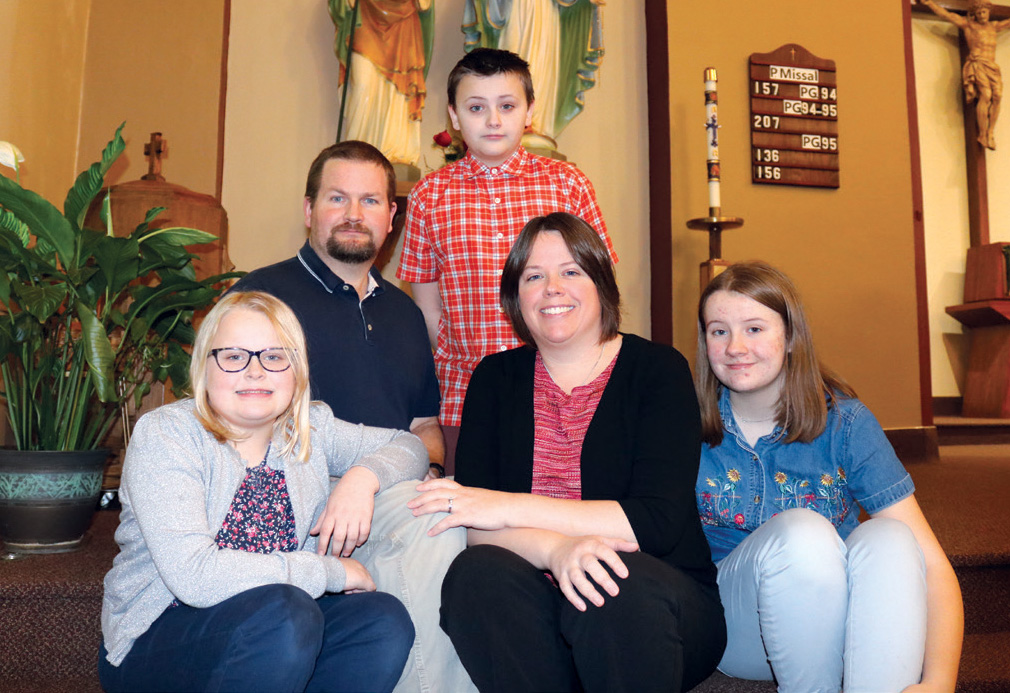 Sean and Paula Hanson love being part of a Catholic family

Sean and Paula Hanson of Chippewa Falls have a story that is familiar to many cradle Catholics. Raised in the Faith, as young adults, both lost their connection with the Church. Their story has a happy ending—Sean and Paula rediscovered the beauty of Catholicism while introducing it to their children.

“Confession was the first step for me,” says Paula. “It happened because our daughter received first reconciliation.”

The couple met in college, where they were studying to be music teachers. Sean became a teacher in area public schools, while Paula worked for the McDonell Area Catholic Schools.

The job difference was noticeable. “He would come home from public school’s in-service day and say, ‘That was the worst in-service day ever,” Paula says.

She was energized and inspired by the McDonell in-service days. “I started praying that he would have a job like I had,” she says.

Sean found a new job when Paula cut back to working part-time. “The position turned my ship around and back towards God,” Sean says.

“He ended up getting my exact job that I had started off with in the McDonell system,” says Paula. “We weren’t sure what God was doing. Sean ended up in the exact spot I had prayed God would put him.”

“The more people you are around, the more you learn how to live a faithful life.”

Paula became active in the religious education program at the family’s parish, Holy Ghost. “I said yes without really thinking too much about it,” Paula says.

The second year she was asked to be the coordinator of religious education (CRE); Paula marvels at how God led her. “It was like He just took me and that whole year was this amazing ride of God preparing me for what I was doing,” she says. “I became on fire for my Faith. I just kept reading and reading and reading.”

For the position, Paula had to attend classes at St. John Bosco Conference, Franciscan University in Steubenville, Ohio, and Sean went too. “I went to the evening sessions. The night sessions were so impactful,” says Paula. “We go back every year. I love being around it.”

Sean also found himself more active within the parish. He became part of the parish men’s group.

“We did the program ‘That Man Is You.’ It really helped with Faith and family life,” Sean says. The group also explored Bishop Robert Barron’s multi-part film series “Pivotal Players.”

“We watch a video. We pray together and talk together,” says Sean. “I’ve always been kind of a loyal member of things. I like fraternity. I like hanging out with guys and talking.”

Music at Mass is also a Hanson family activity, with the five of them participating together or at different Masses. One of the weekend Masses is referred to by some people in the parish as the Hanson Mass thanks to their group effort in serving at the altar and leading songs.

The importance of families growing in Faith is vital, Sean and Paula believe, and they created an opportunity for parish families to celebrate together.

“I got the idea for a family group; we call ourselves EPIC (Engaging Persons in Christ),” Paula says. “We meet once a month in someone’s house. We start with a meal. The kids just go and have fun. We watch a short video and chat about it. Molly Bushman, Tracy Fischer and I put it together. It’s a lot of fun.”

Last year, Sean was very surprised to find himself called by the Holy Spirit to discern becoming a deacon. At first, he joked about entering the diaconate.

Sean realized God was serious after he attended Mass and heard the Gospel about the wedding at Canaan. Sean got the message to obey his Father. “I just went cold,” he says.

He is immersed in the first year of the five-year program held at St. Anthony Retreat Center in Marathon. “It’s a lot of catechetical study. There’s homework and I’m not used to that,” Sean says. “There’s a lot of reading involved. I like the people who are there. The teachers are amazing. No matter what happens, I will learn.”

For every step deeper into their Faith, Sean and Paula bring family with them. Whether it is at eucharistic adoration with their children or pilgrimages with fellow Catholics, Sean and Paula rejoice in sharing the experience with others.

Faith at home is an active and natural part of the Hanson’s life. “I pray with the children at night, and give them their blessing,” says Paula. “It’s an active living in the Faith.”

Interacting with other Catholics in the parish and through the schools is also strengthening for Sean and Paula.

“People really surprise me with their Faith,” Paula says. “The more people you are around, the more you learn how to live a faithful life. Hearing the struggles that people have had; it’s amazing and inspiring.”

Their connection to their parish family was a blessing in November when the Hansons had to deal with a health scare. After returning from a trip to Rome, Sean’s tongue began to swell up and required a trip to the hospital.

Ultimately, he had to be intubated and sedated for three days to treat the swelling. Father Justin was without a vehicle but walked to the hospital to give him the sacrament of anointing of the sick.

The outpouring of love from their parish and school families was inspiring to Sean and Paula. It was another witness of how their Faith makes life on earth bearable.

For those who desire more in their lives, the Hansons believe it is a simple fix that begins with one word. “There are a million ways that people are always looking for help,” says Paula. “Just say yes. Even if you don’t want to, say yes. That’s how you get to know people. It’s a life changer. Just that one little word.”

For those who believe attending Mass is enough, Sean and Paula have another suggestion. “Mass is great, but there is so much more,” Paula says. “Everything else that you do enhances the experience. You look at Mass differently. The more you know the more you love.”

They believe their relationship with God works similarly to their marriage. It’s important to stay connected and be open to God’s guidance.

“Sean and I love each other so much because we know each other so much, but we can also take each other for granted,” says Paula. “God can do a lot with so little. He does it all the time. He works with the little souls like St. Teresa of Calcutta, who said, ‘I’m just a little pencil in God’s hands.’”

Top photo: Sean and Paula with their three children: Caroline (L), Jack (back) and Megan (R).

Published in the May/June issue of Catholic Life