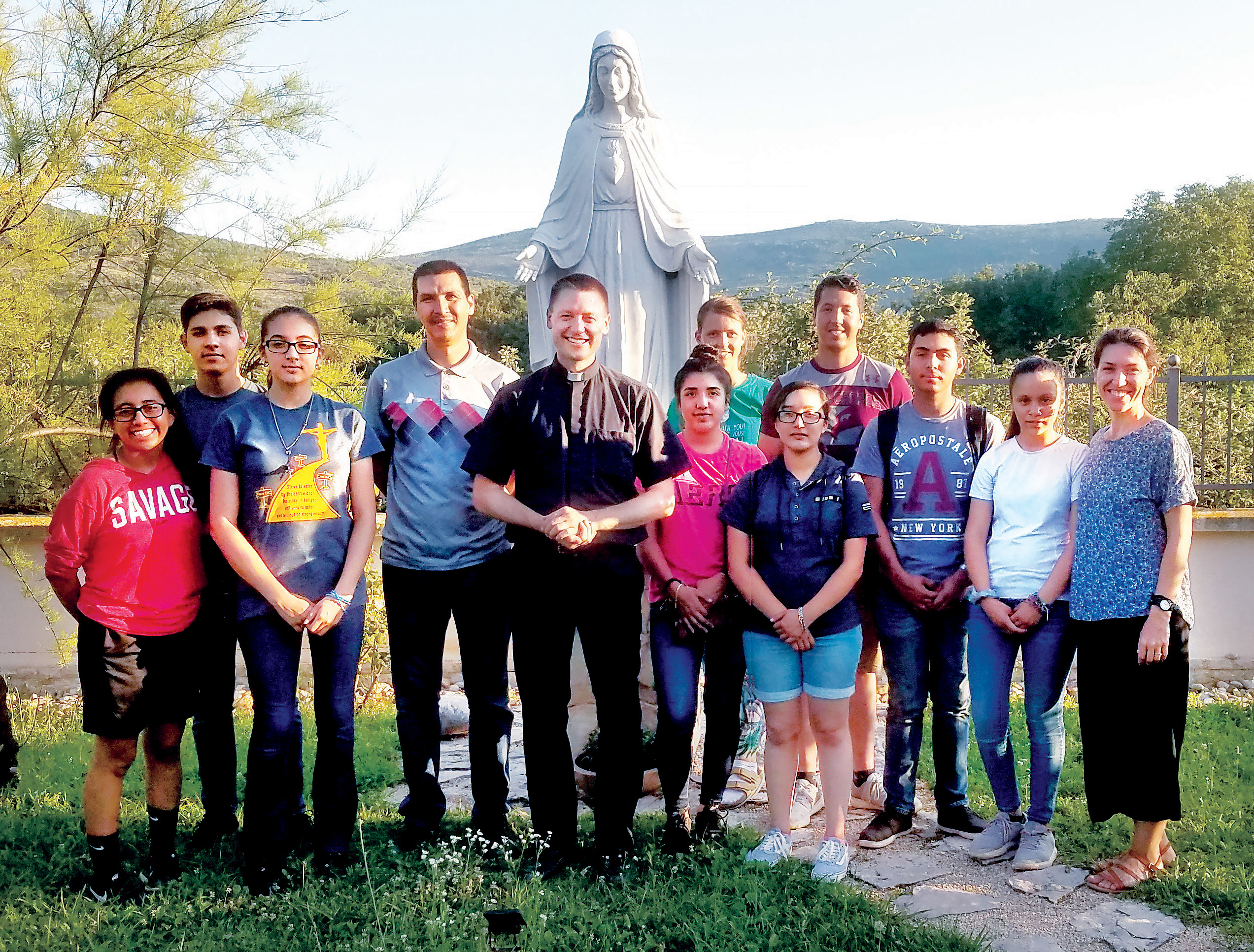 Guillermo and Marcela Jaime of Alma Center want their six children to know prayer and worship are not just for Mass, but a way to be connected to God every day.

Growing up in Mexico, life centered around Faith. Most were Catholic, and the parish was the center of life for the community. When Guillermo’s parents brought the family to the United States, the focus changed.

“I was brought here by my parents in 1997,” Guillermo says. “We lived in a small town and there was no Catholic church. We never went to church, but every year we would go back to Mexico.”

In the United States, the family didn’t go to Mass and rarely said prayers. Returning to Mexico, everything changed.

“It was like we never left,” says Guillermo. “We would go to church and pray the rosary.”

In 1999, Guillermo’s father bought a house in Alma Center. Not going to church in Wisconsin was attributed to work, but there was a bigger barrier.

“We didn’t know any English,” he says. “We were the outsiders. Why would we go there? That was the feeling until a priest told us there was a Mass in Spanish about an hour away. So, we started to drive to Mass every week.”

Guillermo is quick to state the feeling of disconnection was not because of Immaculate Conception Parish. “We just didn’t quite fit,” Guillermo says. “It was just a feeling. Everyone had been good to us. We were welcomed to attend the English Mass, but it was easier to drive to Eau Claire.”

Ten years ago, Father Enrique Castro Cuba started offering Mass in Spanish at Immaculate Conception Parish, in Alma Center, once or twice a month. The family was thrilled, and everyone registered in the parish.

The community connection began to strengthen for Guillermo and Marcela, who had started their life together, as well as Guillermo’s siblings and their families. The family then became active in Hispanic ministry.

“We have always tried to do as much as we can in the Church,” Guillermo says.

He notices the barriers to Faith his family put up when they first came to live in Wisconsin are also used by other Hispanics. First is the language barrier and the accompanying disconnect from Mass being offered only in English, including a fear of being asked questions they won’t understand.

Second is making work the center of life. “There are a lot of people saying they can’t attend because of work,” says Guillermo. “We have the feeling if we miss work it will be the end of the world, when it should be the other way around: If we miss Mass, it’s the end of the world.”

Right now, there are approximately 20 Hispanic families registered in the parish. Guillermo would like to see many more become part of the parish. “We should have enough people to fill the church—it fills up for Quinceaneras,” he says.

Guillermo teaches CCD to Hispanic children in the parish. Many of the participants are part of his extended family. With his five brothers and two sisters all married, except for the youngest brother, there are plenty of children to learn about the Faith from Guillermo.

“We live close together and we are always in touch,” says Guillermo.

But Guillermo wants more than just his family involved in CCD and participating in Mass. “Every time there is a family that has kids, we approach them and tell them we have this program or have CCD in Spanish,” he says.

There are four catechists working in the program and children from age 3 through 19 are welcome to be part of classes. “We divide the kids into groups based on ages,” says Guillermo.

One highlight for the Hispanic CCD students was the opportunity to travel to Rome and then to attend the international Mladifest held in Medjugorje, Bosnia-Herzegovina, in 2019. The Blessed Mother appears to young people from around the world who gather every summer.

The trip was physically demanding but made a huge impact on Guillermo, his brother and the seven children who attended.

“It was a 10-day trip. The first two days were spent in Rome. Then we flew to Croatia and spent six days,” Guillermo says. “At the end, it was life-changing for the kids. They wondered, ‘How can all these people come together for this?’ Everybody praying, everybody receiving the Eucharist. Everywhere you go, you are a Catholic. I have never had that feeling. It just makes you wonder how and why all people aren’t Catholic.”

His conversations meet people where they are in their lives. He is quick to point out to people the importance of bringing God into the lives of their children.

“I have gotten a couple of them to come back to the Church,” Guillermo says. “I have to figure out how to tell them that going to church would be very helpful.”

Often the door to deeper conversation opens up when people comment about Guillermo’s family’s participation in the parish. Then Guillermo is comfortable explaining how Church connects his family to a life with God and helps them live a happy life in Faith.

Guillermo and Marcela approach teaching the Faith to their children through question and discussion and family prayer. “I ask them, ‘What does this mean?’” says Guillermo. “They shrug their shoulders and I say, ‘Good, we can discuss it.’”

During time at home during the COVID-19 pandemic, the family read through the Psalms, each taking a turn reading. Guillermo did an early morning rosary challenge and invited the children to get up on their own and participate, even though some mornings it was only Marcela who joined him.

The family discussed the importance of having a strong home church during the pandemic. “What do we do on the Lord’s Day?” Guillermo said to his children. “We try to keep it holy. Before you do the playing part, we have to do the praying part.”

Even in times of stress, Guillermo and Marcela believe Faith brings peace. “We may not understand what’s going on, but God’s got a purpose,” says Guillermo. “You need to make sure where you are standing, and are you a Catholic or not?”