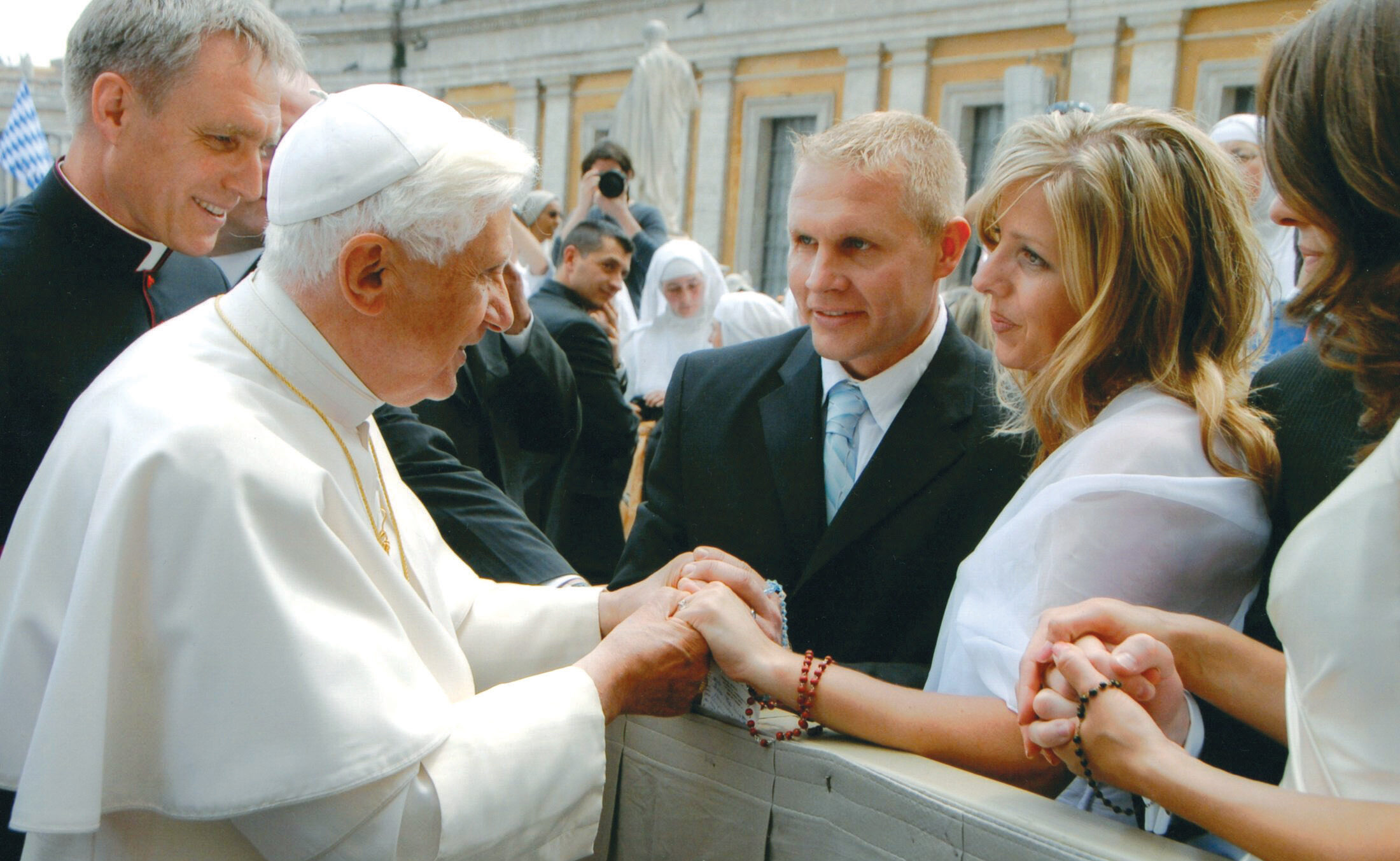 G.K. Chesterton, referring to a thief, once wrote in his Father Brown mystery series, “I caught him, with an unseen hook and an invisible line which is long enough to let him wander to the ends of the world, and still to bring him back with a twitch upon the thread.” — The Innocence of Father Brown (1911)

James Dombrowski of Sacred Heart Parish in Polonia has been an evangelist for most of his life, as Christ asks us all to be. Born into a large Catholic family of Polish descent, James’ family devotions would prove to be God’s “unseen hook,” keeping him on the line throughout the earlier years of his life. Although James would eventually go to the “ends of the world” to a degree, the hook was set deep and eventually James was brought back to the full grace freely offered by Christ and His Church.

James’ early childhood in rural Wisconsin was full of hard work, fun, faith and family. “We grew up on a dairy farm living two miles from my grandparents,” says James. “They technically had legal custody over us, so we could go to Catholic school—that is how important Catholic education was to my family. My dad had 11 brothers and sisters, so it was like a big party at my grandparents every weekend with all my cousins.”

James’ father set the tone of their religious upbringing. “My dad was the head of our family as far as our religious life goes,” says James. “Although I didn’t respect that then, he planted the seeds that took root later on in life. As far as I can remember, we said a daily rosary without fail. We were also saying Divine Mercy Chaplets every day. It has been a part of our family as far as I can remember, and is still one of my big devotions. I say a couple a day. It is a nice short prayer and the benefits of it are immense.”

I prayed, ‘God, I want things to change, I want you to be a bigger part of my life,’ and it felt like I was finally unwrapping this gift I had been given at my baptism, my first Communion and my confirmation.
I chose to accept God from that day forward.

God initially “hooked” James through the power and grace of the Divine Mercy Chaplet. “I was at my grandparents, getting ready to go camping with one of my cousins,” says James. “I was sitting next to my grandpa when all of a sudden he fell back in his chair and started having a heart attack. At 9 years old, I was shocked and thought, ‘What is happening?’ All that really came to mind was my dad teaching us about the Divine Mercy Chaplet. He taught us we should always say it next to a dying person’s bedside. It could make all the difference for them. As my sisters and aunt were carrying him to the couch and trying to do CPR, I knelt next to him and started praying the Divine Mercy Chaplet. That event did not particularly change me in that moment of my life, but feeling his soul leave his body as I was praying; God did get a hold of me in some sense. I was given a deeper understanding of life and death and that God exists.

“After that moment with my grandfather, it wasn’t like I was some holy kid,” says James. “We were still looking to get into trouble like other kids. I was never really falling away from the Church, but it was not a priority and I was not going to let God drag down my ‘fun.’ There was never a time where I did not go to church, but there was very limited belief. I still led a very worldly life that the culture was telling me to live. After a lot of partying, I just started feeling unfulfilled, but I was certainly continuing to rebel from my Faith.”

James attempted living two lives, but God does not allow us to serve two masters. Eventually, James was driven to a turning point in his early 20s. “As I continued down the rebellious path, I started listening to this Protestant preacher on morning radio. This preacher talked a lot about grace and how you are saved through grace.” This exposure piqued James’ interest and he began to research Protestant and Catholic theologians. “The word ‘grace’ just clicked for me one day,” says James. “It is a gift from God. It is something that you do not deserve but He gives it to you freely and it is going to draw you closer to Him and help you understand things a little better.”

“I was excited about God and looked deeper into my Catholic Faith. I started recognizing that the actions I was taking, the way I was living my life, were not right. I was not living up to the standards of the way God wanted me to live my life. I was kind of happy in my life, but I also felt like there was just the black hole present that could never be filled enough by whatever worldly thing I was into at the time.”

James recalls his father’s wise words at the pivotal moment of his life. “My dad always said the most important thing is to have God in your life, and as long as you have that, everything else will work out.” James continues, “I got home from work one night at 1 a.m. and remember getting on my knees and saying, ‘God, I want things to change, I want you to be a bigger part of my life,’ and it felt like I was finally unwrapping this gift I had been given at my baptism, my first Communion and my confirmation. All these gifts I had been given in my life—I had finally accepted them. I chose to accept God from that day forward.”

At that point, James’ life changed forever as he turned his life to follow the path God laid out for him. Eventually, his sister convinced him to give his life story more purpose and he became a CCD teacher at his parish. “I just fell in love with the kids. I was excited about the Faith and they got excited because I was excited, it was just an amazing experience,” says James. “So many came back or wrote letters to me later in life, thanking me for helping them get introduced to Christ. I really took this as a humbling experience, thinking God is finally using the things I did wrong in my life to help teach others. Hopefully, they do not make the same mistakes. I have always been honest with my CCD students about where I’ve been and the mistakes I’ve made, and they can relate to that.”

Today, James and his wife have four girls and continue to evangelize and share Christ through CCD and their everyday lives. “I always wanted to be a missionary in a sense and go off and help people in foreign countries,” says James. “But I realized, God is calling you right where you are. He is calling you to evangelize to all those around you. I love apologetics and now I find myself explaining the Faith with people once I get to know them. The important thing is that they must trust you and are open to it. I’ll just tell people, ‘Hey, I was there once too. I was doubting my Faith, thinking it was not the one true Faith started by Jesus and handed down through the apostles. I did not think we needed these sacraments. I was there, but you owe it to yourself to find out what the true Faith is.’ You must dig deeper and not just trust what others say about such a rich faith as the Catholic Faith.”

Top photo: James and Kelly received a papal blessing for their marriage from Pope Benedict XVI while on their honeymoon in Rome.