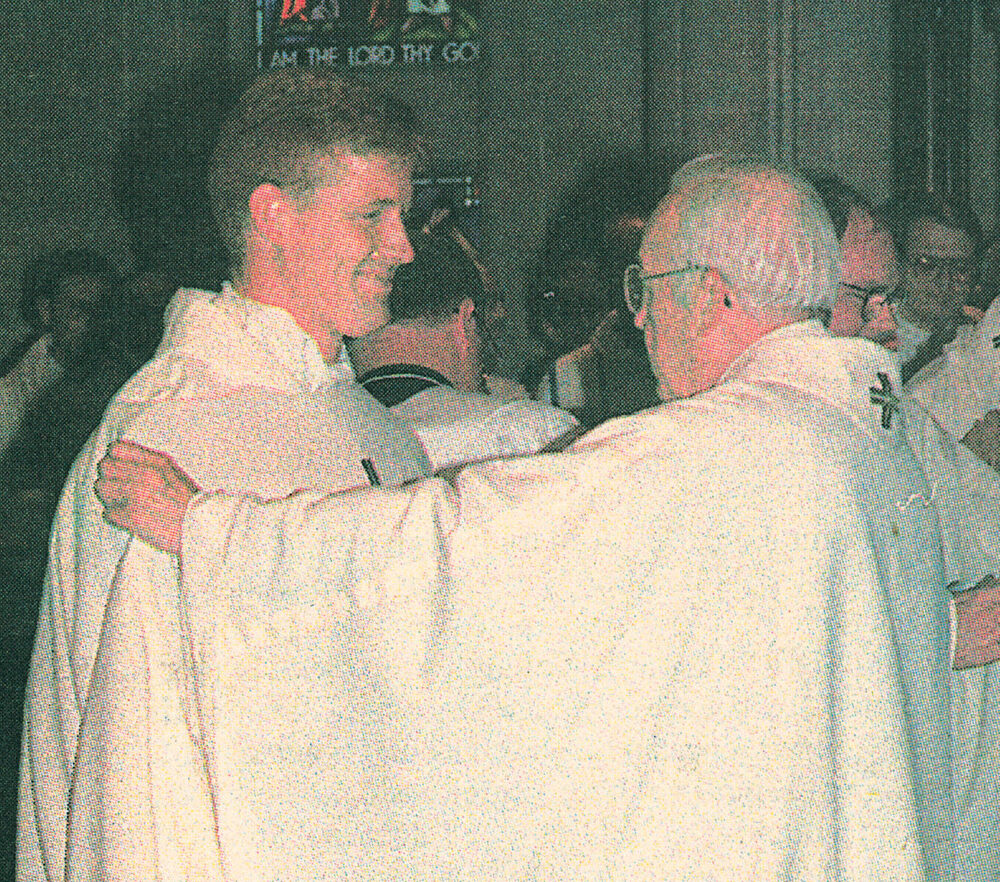 It was during my junior high years at St. Mary School in Richland Center when I began to consider the priesthood. There was a girl in my class whom I enjoyed talking with on the phone every day after school. One afternoon, I told her I was thinking of becoming a priest. She agreed not to tell anyone because the kids at school would make a fuss over it. Well, she told one of her friends, who in turn told apparently everyone at school. The upshot is most of the students ran toward me the next morning as I was getting off the bus, all of them calling out, “Father Berns! Father Berns!” I let my friend know I wasn’t happy with her, and we stopped talking after that. We became good friends during our college years. She and her husband of 24 years were my first wedding after I was ordained. I visited them a few weeks ago and was happy to hear them speak of their love for their parish. God is good!

There were two seminal moments in junior high when I felt the Lord tug me in the direction of the priesthood, and both of them were shrouded in silence and mystery. One was when my family visited the College of St. John in Collegeville, Minn. The large chapel made quite an impression on me. When I walked out, I saw the Benedictine monks walking slowly in their habits, greeting each other with only a silent nod. I stared at them for the longest time, wondering at their peaceful air and their complete absence of any hurry. I knew they were dwelling at every moment in God’s presence, and I wanted to be like them. Around that same time, my eighth-grade class attended the chrism Mass at our beautiful cathedral and afterward toured the Maria Angelorum Chapel at St. Rose Convent. We were given orders to maintain silence as we entered the Perpetual Adoration Chapel. I stared in wonder at the Franciscan sisters as they dwelled silently like Martha’s sister Mary in the Lord’s presence. And in that chapel, the Lord told me He wanted me to become a priest.

During my high school years at Holy Name Seminary in Madison, my attraction to the priesthood grew, and I developed consistent habits of prayer. My friends called me Robin Hood for my habit of often going into the (locked) kitchen in the middle of the night and cooking Tombstone pizzas for them. Each time I did this, I would begin by sitting in the dark chapel, staring at the red sanctuary candle, enjoying the closeness of the Lord in silence. Before every football game or wrestling match, I would go into the same chapel and ask the Lord’s blessing. Throughout those years, nothing made my day more than the exuberant greeting of the seminary’s rector, Father Mike Burke, when we happened to pass in a hallway. Jesus was good to me at every turn, and I decided to trust him with my future and enter the college seminary. Next July, I’ll celebrate 25 years of priesthood.

God has blessed me with wonderful priest friends and a holy spiritual director who is a lay woman. From them, I have learned a few things I hope to make the focus of the second half of my life as a priest. First, my fundamental duty toward God is to receive his love. A prayerful disposition of receptiveness is paramount for the Christian and especially for a priest. The beautiful people of God need to be shown by their priest God loves them, which means the priest must first be convinced of this himself. Second, the greatest obstacle in my priestly life has always been fear—fear of not being enough for the important work the Lord has entrusted to me. Jesus wants to remove every form of fear from my heart. As my parishioners know, the Surrender Novena by Father Dolindo Ruotolo has become for me the path to live in the Lord’s love. Each day, the novena ends with repeating 10 times, “Jesus, I surrender myself to you. Take care of everything.” He has taken good care of me and led me to an experience of priesthood filled with excitement, joy, love and our beautiful hope for heaven.