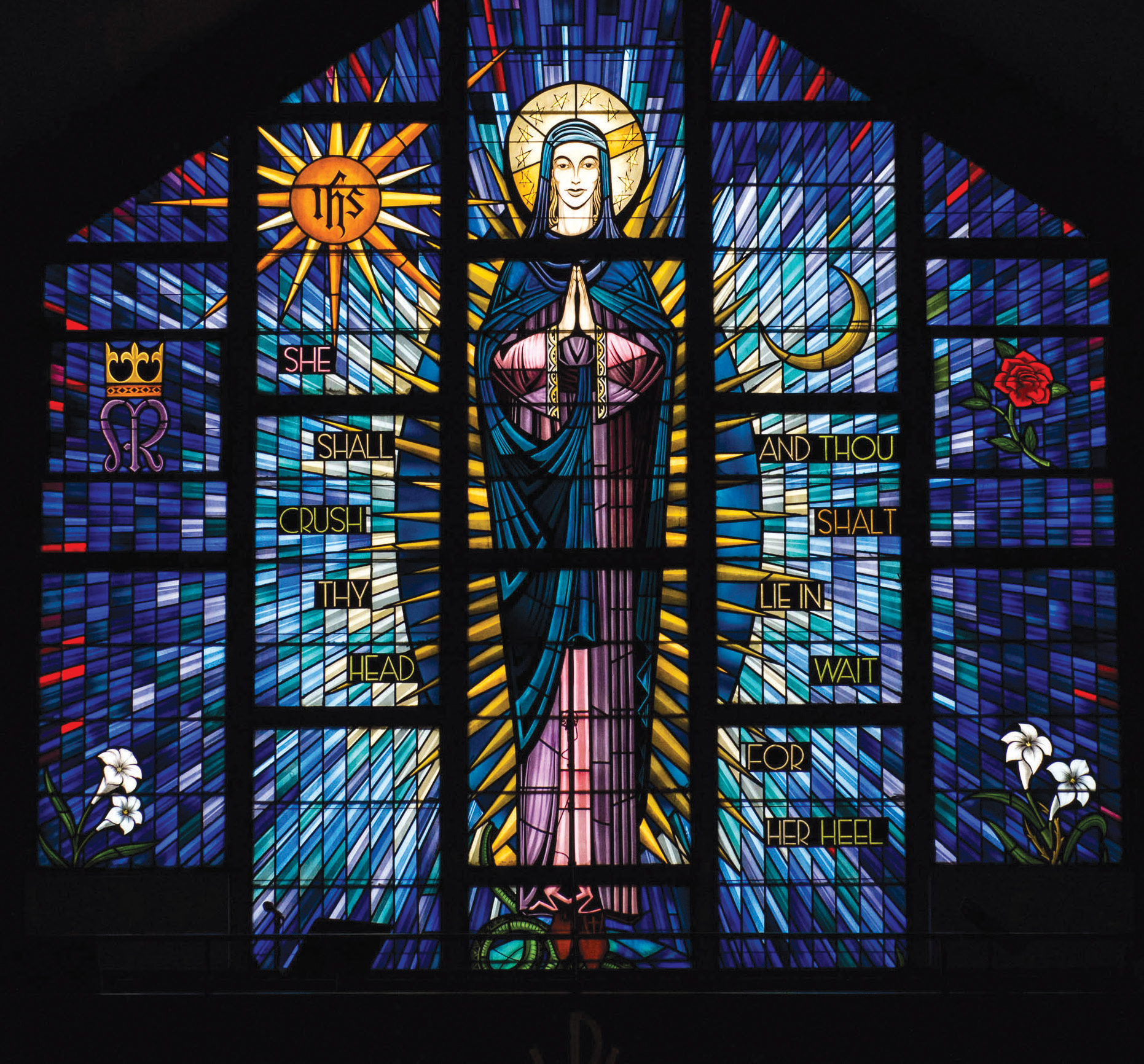 On the corner of Highland Avenue in Eau Claire stands a beautiful stone structure, the church for the Immaculate Conception Parish. The tranquil interior displays the core values most significant to its parishioners. The left-side altar displays a statue of the Holy Family, while the right-side depicts the quiet whisper of God, the Holy Spirit.

This beautiful home of the Lord sprouted from a humble beginning. Their story began 75 years ago amid the burning desire in the hearts of families in the neighborhood on “East Hill.” Several founding families remember Immaculate Conception Parish long before the church was built.

Shortly after the end of World War II, the local population had increased and outgrown the capacity of the two Eau Claire parishes, St. Patrick and Sacred Heart. In 1945, Bishop McGavick established a third parish and named it Immaculate Conception. The new parish, without a church building, rented the Elks Club auditorium and the new pastor, Father Daniel J. O’Reilly, celebrated Mass there. Each weekend, seating was arranged in the auditorium and taken down after Mass. Through it all, the parish members visualized having a church and school they could one day call their own. To make this dream a reality, the women of the parish formed the Immaculata Women’s Society. This energetic group of women hosted dinners, bake sales, bazaars, card parties and thrift sales to raise money for a church and school. The men organized the Holy Name Society, serving church dinners and beginning the tradition of the Lenten fish boil. Young and old worked side by side to raise funds for a permanent church, worthy of praising the Lord.

In spring of 1947, the determined parishioners came one step closer to an official church building by arranging for an old military chapel in Madison to be moved piece by piece to Eau Claire. It was then reconstructed by the men of the parish, on land where the present church and school would one day stand. One can only imagine the joyful and exuberant sound as the music and voices echoed through the chapel on that first Mass in December of 1947. By 1950, the industrious parish groups had raised funds to build the rectory and school. They did not rest, but pressed on to complete the church, a dream they had in 1945. By now, the parish population had increased and outgrown the chapel. On Dec. 7, 1958, the cornerstone for the present church was placed.

With a new church being built, the Immaculata Women’s Society once again stepped up to the mission at hand and, through their efforts of various parish activities, donated the main altar for the church. The men’s group donated the funds for the beautiful stained-glass window depicting the Immaculate Conception above the front entrance of the church.

As Immaculate Conception Parish members reflect on the history of their parish, they feel blessed to be a part of such a beautiful history of love and commitment. The parish has witnessed many changes since its founding years: The change from Latin to English translation, the main altar turned to face the congregation, the removal of the communion rail, girls included as altar servers, women being involved in the celebration of the Mass as ushers, greeters and extraordinary ministers of holy Communion. All changes that help to create the best parish family possible.

Immaculate Conception’s yearlong 75th jubilee celebration began Sept. 28, 2019, with the lighting of the jubilee candle by Mary Claire Hagman, who is 103 years old and the oldest living member of the parish. Mary Claire and her husband Lawrence chose a plot of land within blocks of Immaculate Conception to build their home and raise their family. As Mary recalls, “It was a friendly and safe neighborhood to raise our family. We were surrounded by the best we could offer our family; Faith and a Catholic community. The children could walk or ride a bike to school. Parents were involved in all the church and school events. It was a simple life, blessed by the grace of God. The Franciscan Sisters of Perpetual Adoration lived in a house just down the block, until the convent was built. They attended school, celebrated the sacraments and lived in a neighborhood that was home.”

As the parish celebrates a milestone in history, it reflects with gratitude the selfless gift of love and Faith of the founding families and looks forward, with great hope, confidence and anticipation, to the amazing possibilities of the future. This gift has grown for the last 75 years, giving witness to a Catholic way of life. The rich history of this Faith-filled, Christ-centered community continues to share the gift of time, talent and treasure, bearing witness to Christ’s love and faithfulness. Not merely satisfied with maintaining a building, but living as a vibrant community in every aspect of Faith, family, education and spiritual life, giving public witness through joyous discipleship in Christ. Its witness is demonstrated through Lenten fish boils, fall festivals, monthly senior dinners, pizza Saturdays, donut Sundays, cookie walks and school events.

Father Francis Thadathil, the current pastor of Immaculate Conception, looks forward to spiritual growth within the parish in the coming year, with the focus on the treasure of the family, its spiritual growth and well-being.

The future of the church calls upon its humble beginnings: sacrifice, love and commitment. These qualities will support strong Catholic families for generations to come.

Renee Cassidy has been a member of the Immaculate Conception Parish for 49 years. She has served the school beginning in 1979 as a teacher for grades 6-8 for seven years, and ended as principal for 11. Renee states, “I have been blessed to work with four of our pastors since Father O’Reilly hired me in 1979. Each pastor brought their own style of ministering; I’ve enjoyed working with them all. Father O’Reilly was a charismatic pastor. He knew everyone’s names and families, improving the morale. Father Klink brought a sense of humor and spirituality. Father Meuret was a chef and a carpenter. He remodeled the church and made social gatherings important to the parishioners. Our current pastor, Father Francis, brings a high level of kindness. His personality makes everyone feel welcome and he is rarely seen without a smile.”

To keep up with the demands as teacher and principal, Renee would often retreat to the church during the school day. She would sit in silence, in the presence of God, where she found grace and peace.

Thank you, Renee, for your years of service, love and sowing seeds of spirituality to the youth of Immaculate Conception School. Your gift is one that will continue to reap good fruit for future generations.

Linda Corey, director of religious education (DRE), celebrates her retirement after 32 years of service to Immaculate Conception Parish. Linda recalls her spiritual journey beginning at home, under the guidance of her parents, who set an awesome example of what it means to live as a disciple of Christ. She met her future husband while a student at UW-Eau Claire. After their marriage, Linda attended the Rite of Christian Initiation of Adults (RCIA) program and then the Lay Formation program at Immaculate Conception Parish. When the DRE position opened up, Linda saw it as an opportunity to use her newfound knowledge and passion. Under the direction of Sister Dorothy Brenner, principal of Immaculate Conception School, and Father Klink, Linda accepted her new calling in life as DRE.

“Looking back, the past 32 years have been an adventure. You never know where God might lead you when you put your trust in Him. For me, it has been, and still remains, a worthwhile adventure and mission.”

One of Linda’s favorite memories is leading mini mission trips. Youth would come together and learn hands on by putting discipleship into action. Her work, creating “saints in training,” was a labor of love. Planting seeds of Faith in her students, she was allowing God’s grace in them to mature, as they became spirit filled parishioners.

Linda’s inspiration is a quote from St. Oscar Romero, “We cannot do everything and there is a sense of liberation realizing that. This enables us to do something good and do it very well. It may not be complete, but it is a beginning, a step along the way, an opportunity for the Lord’s grace to enter and do the rest.”

Thank you, Linda, for 32 years of love and service to all the young people’s hearts and minds who have been touched and formed by your service to Immaculate Conception Parish. You have given the gift of spiritual growth and possibilities that will remain with the youth of the parish throughout their lives and be passed on to the next generation.