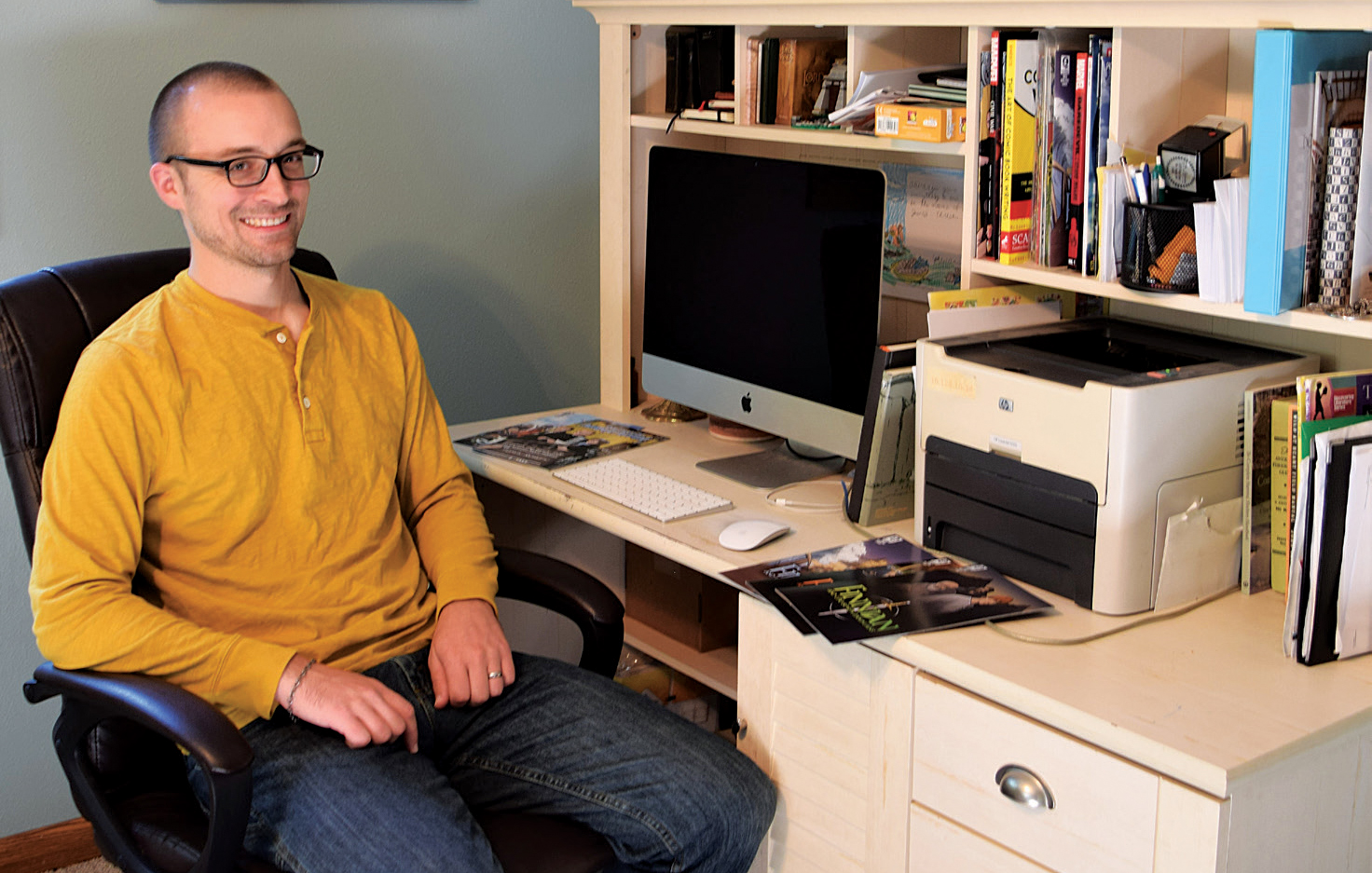 “I have discovered that God will often open doors when you use the talents He gave you and are faithful to Him.”- Phil Kosloski

One of our greatest challenges as Christians is to learn to listen to God in a noisy world, to tune our ears to His voice and hear His call. Philip Kosloski, of Ss. Peter and Paul Parish in Wisconsin Rapids, has been practicing the fine art of discernment since he was a teenager. His life has taken him on adventures through his dedication to following his unique calling. He has been taking risks, often going out on a limb, to be a part of projects he never could have imagined. Now he has come full circle in teaching others how to discern God’s will and encouraging them to live lives of heroic virtue, precisely by being who God created them to be.

Growing up in Junction City, the youngest of five children, Phil and his family were parishioners at St. Wenceslaus in Milladore, where they attended Sunday Mass together each week. Though the Catholic Faith was a part of his upbringing, and he knew it was ultimately important, Phil did not feel any particular attachment to the Faith as a child. Then, during his high school years attending Stevens Point Area Senior High (SPASH), at a time when many teenagers begin to fall away from the Faith, Phil felt inspired to investigate the Church and seek out answers to the basic questions about Catholicism, starting with the Real Presence of Jesus in the Eucharist.

God began showing me the talents he gave me. I discovered that I had a talent for writing and began a blog.”

Looking back on his seeking, he admits: “What I discovered blew me away and I know that I could never turn back on my Faith.” With a desire to continue to learn more, Phil joined a local youth group at St. Peter Parish in Stevens Point called the Dead Theologians Society. “It was there that I found fellowship with Catholic teenagers and began to discern where God was leading me,” he says.

At first, he felt called to enter college to study graphic design and likely get married, but in prayer he did not have peace about proceeding with these plans. “I wasn’t sure what I was supposed to do,” Phil explains, “but I had a sneaking suspicion that I needed to enter seminary to study to be a priest.”

Phil turned to prayer and spent most of his free time in front of the tabernacle at a local church. He called upon his devotion to St. Thérèse of Lisieux and began her famous “Rose Novena.” Entering the church to pray on the ninth day, there sat a single red rose propped up at the foot of the altar, seemingly just for him. Phil took that as a clear sign he needed to at least apply to seminary for the Diocese of La Crosse.

He was accepted, and, in the fall of that year, entered seminary at the University of St. Thomas, where he spent the next three years growing in Faith and prayer. “I treasure those three years and am eternally thankful for them,” Phil shares. But during that third year, he felt God drawing him away from seminary life and discerning a call to marriage.

Returning home that summer, Phil volunteered to chaperone several youth ministry events with Assumption High School. He accompanied groups to Steubenville conferences and even World Youth Day in Australia. During these trips, he got to know one of the religion teachers, Maggie, particularly well. He learned that she too had spent time discerning religious life, having spent a short time as an aspirant with the cloistered Carmelites in Denmark, Wis. Phil and Maggie grew in their relationship as they navigated fundraising efforts and coordinated travel with teenagers. The two began dating and shortly thereafter became engaged. Phil returned to St. Thomas for his final year and graduated with a degree in philosophy and Catholic studies. Phil and Maggie were married the following summer and made their home in Wisconsin Rapids, where they continue to reside.

Phil was offered a position as the director of faith formation and served in that capacity for several years, during which time he earned his master’s degree in theology from the Augustine Institute. Phil shares that, in small quiet ways, “God began showing me the talents he gave me. I discovered that I had a talent for writing and began a blog.” The blog was called Into the West, which explored the Christian symbolism embedded in Tolkien’s mythical realm of “The Lord of the Rings.” “This first blog of mine was where I discovered my passion for writing and renewed my love for stories that inspire and challenge us to live beyond ourselves,” says Phil. “After a few years, my blog got the attention of the National Catholic Register, as well as Aleteia.org. Through God’s providence, I was able to devote myself full-time to writing and am still currently employed by Aleteia, as well as the Pope’s Worldwide Prayer Network (Apostleship of Prayer).”

For Aleteia, Phil is a spirituality writer, focusing on Catholic heritage and tradition and how that treasury can impact our lives today. Some of his most widely read articles center on prayer, discernment and hearing God’s voice.

Phil has been able to work at home for the past five years. He tries to complete most of his work before his family rises, as well as incorporating into his morning the Liturgy of the Hours. Being at home has allowed him to have a more active role in day-to-day family life, being present as Maggie homeschools the couple’s five children. Their family enjoys sharing the responsibilities of their homestead and playing games together.

Through further discernment during these past few years, Phil has felt called to expand his creative writing to produce faith-filled stories. “These stories have taken the shape of comic books and are geared not only at children, but adults as well. It is truly remarkable how God has helped perfect my craft, even though I was never educated in comic-script writing.” Providentially, after Phil announced his intention to create Catholic comics, he was put in touch with a Marvel Comics artist and an animator who worked with Disney. “Both were fervent Catholics interested in my endeavor and ready to give me the advice I needed,” Phil explains.

“After creating my first comic, I knew God was calling me to bigger things, so I founded Voyage Comics & Publishing,” Phil says. “Our mission is to create quality entertainment, formed by Catholic values, that inspires people to live a heroic life. Through our comic books and publications, we seek to advance the truth, beauty and goodness that can be found in effective storytelling.”

Voyage Comics’ principal series is called “Finnian and the Seven Mountains,” a tale based on various medieval legends, including a set of monasteries in Europe that form the “Sword of St. Michael.” Currently, Phil is working on the next installment of the series with the help of a Marvel Comics artist. Other Voyage comics include “The Mission of Joan of Arc,” based on a play written by St. Thérèse, “Jonah’s Voyage to Atlantis,” inspired by ancient legends and Tolkien’s translation of Jonah, “The Tale of Patrick Peyton,” a Venerable apostle of the family rosary and several works still in the planning stages.

Those who expend their talents with Voyage Comics, firmly believe the entertainment industry needs more quality, family-friendly content and are committed to being a part of the solution. They are beginning with comics but hope to expand to other types of media as well. “We don’t just want to ‘preach’ the Gospel, but to ‘show’ it,” Phil shares. “One of our influences is Catholic author J.R.R. Tolkien, who wrote his “Lord of the Rings” series in a truly ‘Catholic’ way, informed by his Faith, but also open to everyone, even non-Christians.”

As his Catholic publishing company grows and as his articles circulate, Phil continues to cling to his routine of prayer and discernment, always open to the next adventure God calls him to. Within his parish, while Phil volunteers as a Scout leader for the Federation of North American Explorers, he is helping to inspire his young Scouts to seek and emulate heroic virtue. The time spent raising a family and the moments of relishing in his hobbies of hiking, reading and raising bees give him further opportunity to hear God’s voice and bring his talents to the world.