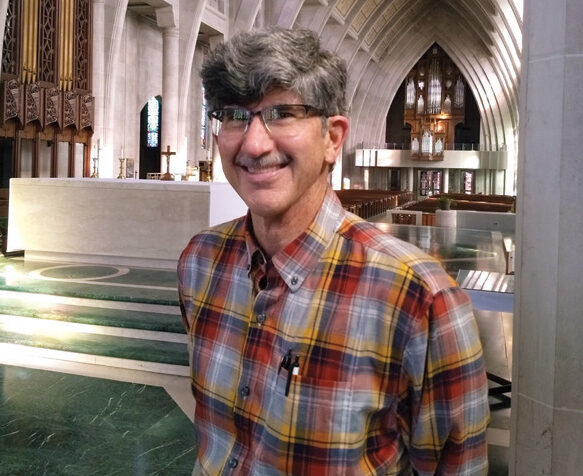 St. Joseph is known to all Catholics—or is he really? He is the foster father of our Lord and Savior, Jesus Christ, the husband of Our Blessed Lady, Mary, a carpenter by trade and a man who worked with his hands. One can only read about him in Matthew and Luke’s Gospels, where he is specifically named. However, compared to other people in the Bible, references to St. Joseph are sparse. St. Joseph is the most revered Catholic saint, eclipsed only by the Virgin Mary, as borne out by the fact that St. Joseph or, in Spanish, San Jose, is the most commonly named place in the world. Why is St. Joseph so revered despite an apparent obscurity in Scripture?

Charlie Peters, a member of St. Joseph the Workman Cathedral Parish in La Crosse, decided he wanted to learn about, and reflect more deeply on, the life of St. Joseph. Charlie, together with about a dozen other parish members, began a 33-day journey of Faith, preparing to consecrate themselves to St. Joseph by imitating him in virtue and holiness and thus serving as witness of St. Joseph to the world. That journey ended with their consecration on May 1, the feast of St. Joseph the Worker, established by Pope Pius XII in 1955.

“The consecration to St. Joseph is something I found to be extraordinarily worthwhile,” Charlie said, “And I wanted to share my experience with others.” At the time, Charlie was grand knight of Knights of Columbus Council 839 in La Crosse. Also, Bishop William Patrick Callahan had just proclaimed 2020 as the Year of St. Joseph (May 1, 2020 to May 1, 2021). Charlie said, “I thought the time was right to bring a group of men, knights of my council, together to participate in a 33-day program of consecration to St. Joseph.”

The idea was accepted by the council and they invited members from sister Council 16444 based out of St. James the Less Parish and the Shrine of Our Lady of Guadalupe to undertake the 33-day program, with Charlie as their leader. Eight men went through the program for the first time. They followed the method used by St. Louis de Montfort, a 17th century French Roman Catholic priest and confessor known for his particular devotion to the Blessed Virgin Mary and outlined in the book Consecration to St. Joseph: The Wonders of Our Spiritual Father, by Father Donald H. Calloway, MIC.

The consecration to St. Joseph is something I found to be extraordinarily worthwhile and I wanted to share that experience with others.” – Charlie

Returning to the question, “Why is St. Joseph so revered despite an apparent obscurity in Scripture?” The answer lies in what we know from Scripture, even though the accounts are brief. The accounts describe the virtues of a man whom one can strive to imitate. These virtues speak particularly to men because St. Joseph can be a spiritual father to them: virtues they can strive to emulate in their daily lives to become better fathers, husbands and workers themselves.

First and foremost, St. Joseph loved Mary deeply. After they were married, Joseph learned that Mary was already carrying a child who was not his. Custom at the time was to divorce her according to law. But he also knew that she could be stoned to death if the divorce became public. So being a “just man” (Mt 1:19) Joseph decided to divorce her quietly, until an angel came to him and told him that the child was the son of God and was conceived by the Holy Spirit. Consequently, Joseph kept Mary as his wife. He was faithful to God’s Word.

Joseph loved and protected his family. Warned by an angel of King Herod’s decree to kill first born male children, Joseph took Mary and Jesus to Egypt to escape King Herod’s wrath. It was only when Joseph learned that King Herod had died did he return with his family to the Holy Land to settle in Nazareth, in Galilee. He avoided settling in Bethlehem, fearing continued reprisals of King Herod’s successor.

Joseph provided for his family by doing honest work. Both Matthew’s and Mark’s Gospels ask the question, “Isn’t this the carpenter’s Son?” referring to Jesus and his foster father Joseph. In some scriptural translations, the meaning of carpenter also refers to one who is a builder or repair man. Joseph was the man you called on when things needed to be built or fixed. Indeed, he was a workman.

Another member, Frederick, shared this, “The consecration to St. Joseph has given me much peace in my walk with the Lord. Depending on him for my earthly and spiritual life has helped me to really focus on carrying my cross wherever God leads me. Thank you, St. Joseph!”

Consecration group member John stated, “I was so happy I was asked to be a part of the consecration to the St. Joseph program because I’ve always had a devotion to him. The program, week after week, gave me more knowledge about the Holy Family. Saying daily prayers and attending Mass gives me a greater appreciation of what St. Joseph did to raise his family.

Monsignor Matthew Malnar offered this reflection: “During my 54 years of priesthood, I have made several consecrations. After embarking upon the 33-day formation period, ending with a consecration to St. Joseph, I truly believe I have grown spiritually through the formation and consecration preparation. I hope all parishes in the Diocese of La Crosse will offer the same program, especially for their male parishioners. Today marriage and even fatherhood are often challenged. We need Joseph to be present during these difficult times, just as he was always present to Mary and Jesus.”

Larry, another member of the group, remarked, “The many titles and virtues of this greatest saint and father have continued on as Joseph now is part of my daily morning offering and the object of many ejaculatory prayers during the day. We have so much to be thankful for in this great saint and spiritual father.”

Perhaps now is the time to reflect on the life of St. Joseph and resolve to mirror our lives in his image.