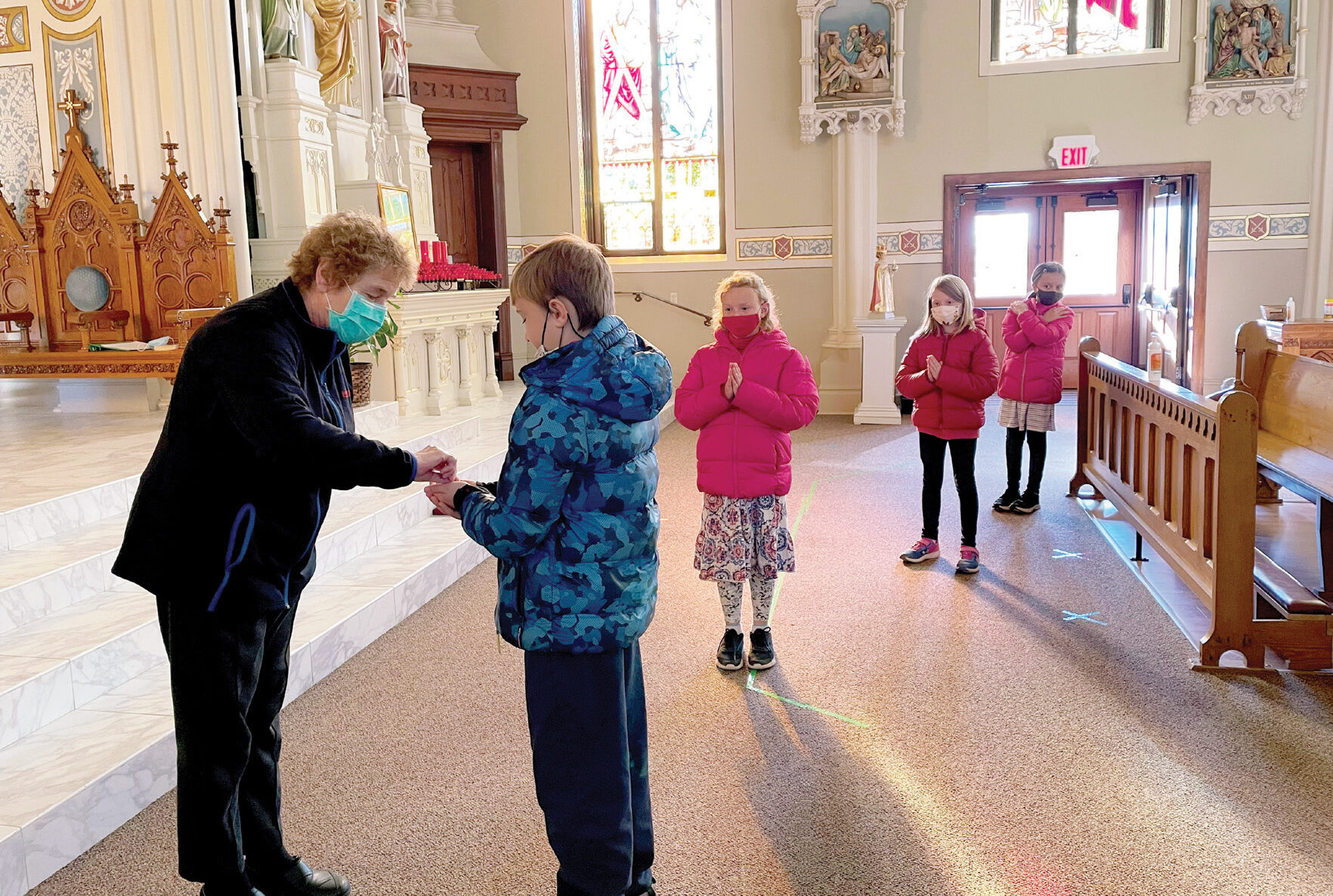 Marge Baecker is looking forward to reaching a significant milestone this year. “I will be celebrating my golden anniversary of teaching,” she says with delight. “I was offered my first teaching job 50 years ago at Ss. Peter and Paul School in Independence and I’ve been there ever since.” Marge has enjoyed many different roles in her teaching profession during the past five decades, including her current position as director of religious education. She was also the principal of Ss. Peter and Paul Catholic School three times, coming out of retirement on multiple occasions to take on that responsibility. “My family and some of my friends teased me that I retired more often than Brett Favre. I just kept coming back,” she says with a laugh. “It is interesting to see how the Holy Spirit works in your life.”

A strong Catholic Faith has been central in Marge’s life from an early age. “I was born and raised in Adrian, a little town in southwest Minnesota. I come from a very traditional, very German family with good Catholic family values. It was a gentler time,” Marge reminisces. “My dad farmed and mother was a stay-at-home mom to six daughters, which kept her very busy. It was just like “Little House on the Prairie.” When you grow up on a farm in southwest Minnesota, you see everything. We had harsh winters, tornados in the summer and dust storms. You name it, we experienced it.”

“When you get to the point that your former students are now grandparents, that is really something.”

All six daughters received 12 years of Catholic education. “Having a strong Catholic Faith was very important to my family. It was instilled in us through our parents and grandparents,” Marge says. “There were numerous vocations to the priesthood and religious life in the Klein family. My uncle and two cousins were priests, and several other cousins belonged to a religious order serving in the Winona Diocese. The Sisters of St. Francis from Rochester were assigned to our parish, so they taught me all of my life.”

It seemed only natural that Marge would continue her Catholic education when she chose a college to attend. “I went to the College of St. Teresa in Winona, so I had 16 years of Catholic education with the Sisters of St. Francis,” Marge says. “I received my undergraduate degree in history and social sciences. After that, I became the forever student, going back to school to earn my elementary education certificate, and later on, my master’s degree in education from UW-La Crosse.”

Moving to Independence in 1971 for her first teaching job proved to be a life-altering decision. “I came to Ss. Peter and Paul because there was a job available,” Marge says. “Never in a million years would I have imagined I’d still be here, 50 years later.” She started out teaching what would now be referred to as middle school for two years, and then moved to teaching fifth grade. “That’s where I found my comfort zone, teaching fifth graders, and that’s where I stayed for most of my teaching life,” she says. “I loved teaching fifth grade. You can still reach them at that age, they respect you and listen to you.”

Marge also met her husband, Bill, when she moved to Independence. They married in 1974 and raised two sons, Nick and Patrick. “Because I was raised Catholic, and my husband was too, it was a given that our boys would be raised in the Catholic Faith,” Marge says. “They attended Ss. Peter and Paul School, went to Mass with us every Sunday and participated in parish events. It was almost like the same upbringing my husband and I had, it just continued to the next generation. Now, Patrick and his wife, Gloria, are continuing the tradition of providing a Catholic education for their children, Bennett and Logan.”

Marge enjoyed watching not only her own children, but also her students, grow into faith-filled adults. “Many of the kids that I taught have come up to me years after they graduated and introduce me to their spouses as their fifth-grade teacher,” Marge says. “They still remember me, and they still call me Mrs. Baecker, even though they are now adults!” Realizing that she has taught multiple generations of children can be a little daunting for Marge. “When you get to the point that your former students are now grandparents, that is really something. At first, I realized I must be getting up there in years when I was teaching the children of my former students, but then I began teaching the third generation – my students’ grandchildren! That was when I said this is too much, it’s time for me to retire.”

But retirement didn’t last for long. “Our pastor at the time, Father Doug Robertson, knew I was retiring from teaching. He came to me and asked me to be the principal of the grade school,” Marge says. “I did that for two years and then I decided to call it quits and retire again.” She took some time off and then worked in the activities department at a local nursing home. “I really enjoyed that; it was a good experience for me,” Marge says. “Then we got a new pastor, Monsignor David Kunz, who called me and here we go again; Marge comes back to work at the parish! He needed help with the confirmation program, so I returned to Ss. Peter and Paul. The following year, my role expanded and I became the director of religious education.”

Marge continued in that role for a few years. “In 2010, Monsignor Kunz left the parish and Father Woody Pace became our pastor. And wouldn’t you know it, another principal resigned,” Marge says with a laugh. “I don’t know whatever possessed me, but I told Father Woody that I would help out at the school and serve as the principal again.” However, this time Marge had a bit more on her plate than just that one job. “That was a very challenging year because I was the principal, still doing some religious education work at the parish and I was in the Diocesan Lay Formation Program, too,” Marge remembers. “I don’t know how I did it all. It wouldn’t have been possible without the support of the great teachers and the catechists that I had the privilege to work with.”

But that isn’t the end of the story. “I was principal for two years before another principal was hired. I went back to religious education work in the parish and then, if you can believe it, that principal resigned. Well, here comes Marge again!” she chuckles. “I was the principal three times in our school. The third time was only for a year. At that point, I felt like I needed to go back to where my heart really was, and that was in religious education. And I’ve been doing that ever since.”

Marge finds great enjoyment and satisfaction in passing on her love of the Catholic Faith to others. “Working with the students in our CCD program and our confirmation students, my heart really belongs there. I especially love teaching Scripture. It’s so fulfilling to see how people react. We have Bible studies at the parish and the participants are hungry to learn more about their Faith. I also really enjoy working with adults in our Rite of Christian Initiation of Adult (RCIA) program. Sometimes, the RCIA candidates bring their spouses along to class, and the spouses tell me how much they also learn about their Faith. They are very appreciative and it’s a positive experience for all of us.”

These days, Marge is a leader of prayer for the parish and has reduced her work as director of religious education to part-time so she can spend more time with her husband of 46 years. “Bill was diagnosed with Parkinson’s disease 20 years ago and I took care of him at home for as long as I could. He’s in a skilled nursing facility now. It just reached a point where I couldn’t do it by myself anymore,” Marge says quietly. “It’s been very difficult to have him diagnosed with that disease at such a young age. I tell people that God gives us all crosses to bear, but some are heavier than others.”

Marge’s family also suffered a tragedy when her sister, Bev, died last year from an aggressive form of brain cancer. “I can ask God, ‘What’s going on here? Why did this happen?’ But I have Faith that God has a reason for everything that happens to us. Someday I will know what that reason is. I have had to learn to accept what God has given me. Some days are easier than others to do that.” But through it all, Marge maintains a positive, faith-filled attitude. “I truly believe when God closes one door, another one will open. If I’m down at any point, I know there is a reason and God will provide. I just have to trust in that.”

Marge says she isn’t quite sure how she has had the fortitude to teach for 50 years. “It’s a feeling of great satisfaction when you realize that the light bulb went on and a student really learned something that will make a difference in his or her life. I may not be able to reach all of the students in that way, but for those that I do, even if it’s only one or two students, I know that I did positively affect some part of their education and their life.”

“I would say at the center of it all is my Faith. Otherwise, I wouldn’t have been teaching for all these years and enjoying it,” Marge explains. “I don’t get up in the morning and complain about having to go to work. I wouldn’t be doing it this long if I didn’t enjoy it.” Pausing, Marge adds, “Faith has given me more of an acceptance of what my life is. Maybe, sometimes,

I could sit down and feel sorry for myself, but I don’t. I have Faith that things will work out. The Holy Spirit will always provide.”