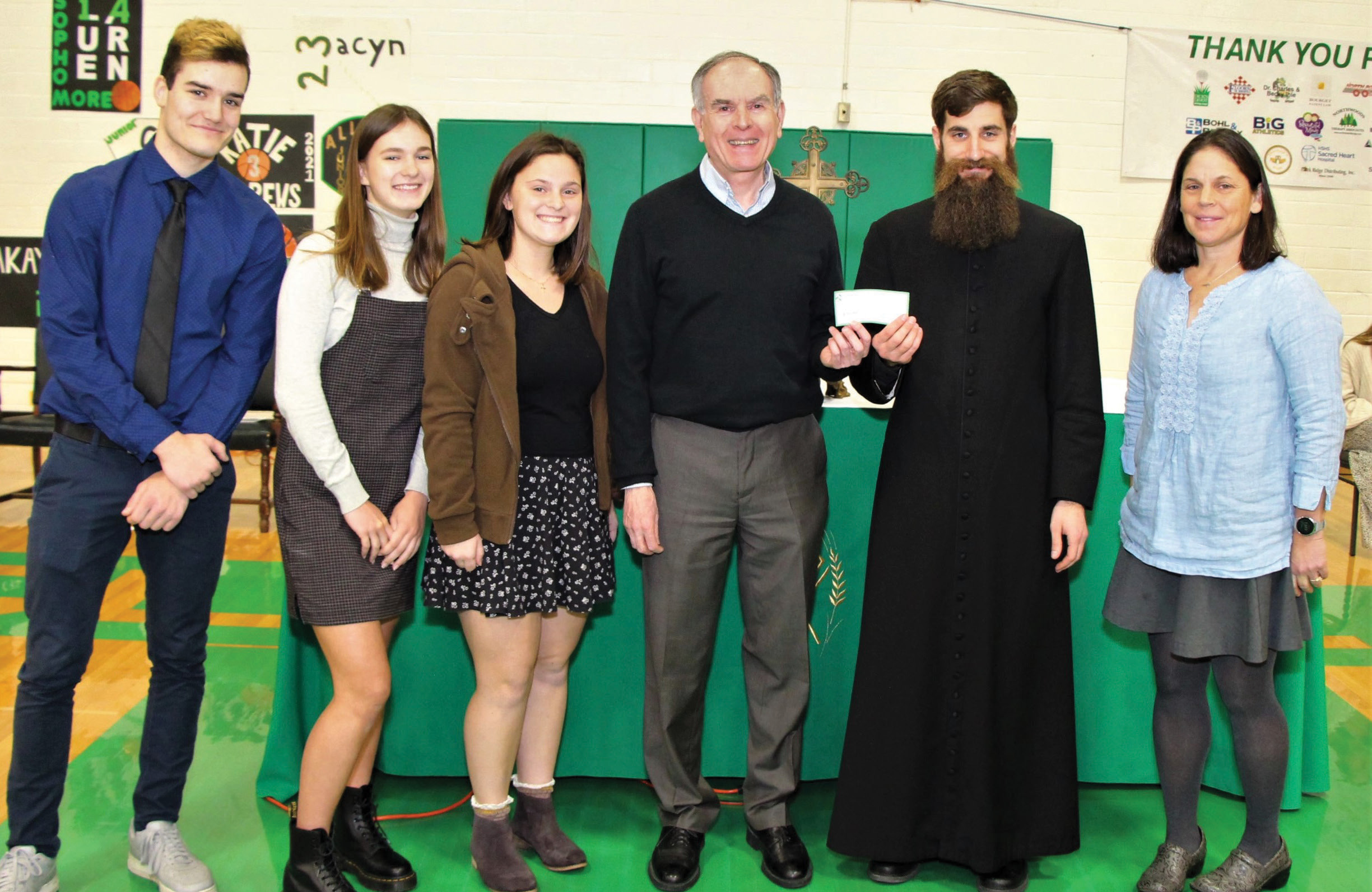 Photo caption: Steve presents a check to sponsor three students and their chaperone to attend the 2019 March for Life in Washington, D.C.

Steve Werner’s thoughts on the right to life began to crystallize more completely when he started managing a group home for the developmentally disabled in 1993. It was there that he met a man with Down syndrome and subsequently developed a close friendship with him.

About the same time, his mother was diagnosed with Parkinson’s and Alzheimer’s diseases. Steve said, “As I was managing the group home, I would live with her on the weekends. Otherwise, she was able to live by herself. However, by 2000, it became clear that she needed 24-hour care. So, I quit managing the group home to become her full-time care-giver. I did that until she passed away in 2006. She was able to stay right there at home, which was good.”

It was these personal experiences with individuals who are vulnerable and whose lives are threatened that prompted Steve to join the Right to Life movement. “I’m concerned about lives at risk of being aborted in the womb because of a genetic disorder like Down syndrome,” said Steve, “and lives of the elderly amidst calls for euthanasia and assisted suicide becoming more prevalent and more troubling.”

Pope Francis calls us to value each other. “Human life, because of its eternal destination, retains all its value and dignity in all conditions, including precariousness and fragility, and as such, is always worthy of the utmost consideration.” The dignity of each person “imposes a duty to never abandon anyone,” Pope Francis said.

I’m concerned about lives at risk of being aborted in the womb because of a genetic disorder and lives of the elderly amidst calls for euthanasia and assisted suicide.

According to their website, the Wisconsin Right to Life (WRL) organization states they “believe that each human life is inherently valuable from fertilization to natural death. Our mission is: ‘To make euthanasia, infanticide, abortion and destruction of human embryos socially, ethically and legally unacceptable solutions to human problems and to promote positive alternatives to each of these acts.’”

Furthermore, WRL’s vision “is to touch hearts and minds so that all will cherish human life. Each day we work to create a society in which every person’s right to life is secure. In living out our vision, we strive to be a unified, responsive organization with members empowered to accomplish our common goals. In doing so, we act with integrity, strength of purpose and respect–toward those we serve and toward those with whom we disagree.”

The Eau Claire County Chapter of Wisconsin Right to Life is active in promoting events that reflect on the value and dignity of human life. Steve related that, “In addition to our annual January Rally for Life at which our chapter sponsors a pro-life speaker at a local church in Eau Claire, each year we also have a booth at the Northern Wisconsin State Fair in Chippewa Falls, and we also sponsor the annual October Life Chain. (The Life Chain is a peaceful and prayerful public witness of pro-life individuals standing for 90 minutes praying for our nation and for an end to abortion.) We also publish a quarterly newsletter.” The main sources of funding are their Mothers’ Day Rose Sale, Baby Bottle Fundraiser and the local Knights of Columbus Council’s Lifesaver Campaign.

The Eau Claire County Chapter sponsored three Regis High School students and their faculty member chaperone to last year’s Washington, D.C., March for Life. Steve said, “The four pilgrims were very grateful to the chapter and said how ‘amazing’ and ‘unforgettable’ the experience was.”

The chapter also sponsored some UW-EC Students for Life to the March for Life and has sponsored area students to Wisconsin Right to Life’s State Conference and Summer Life Camp.

We celebrate life for life is a gift from God. Pope St. John Paul II put it this way, “In every child which is born and in every person who lives or dies, we see the image of God’s glory. We celebrate this glory in every human being, a sign of the living God, an icon of Jesus Christ.”