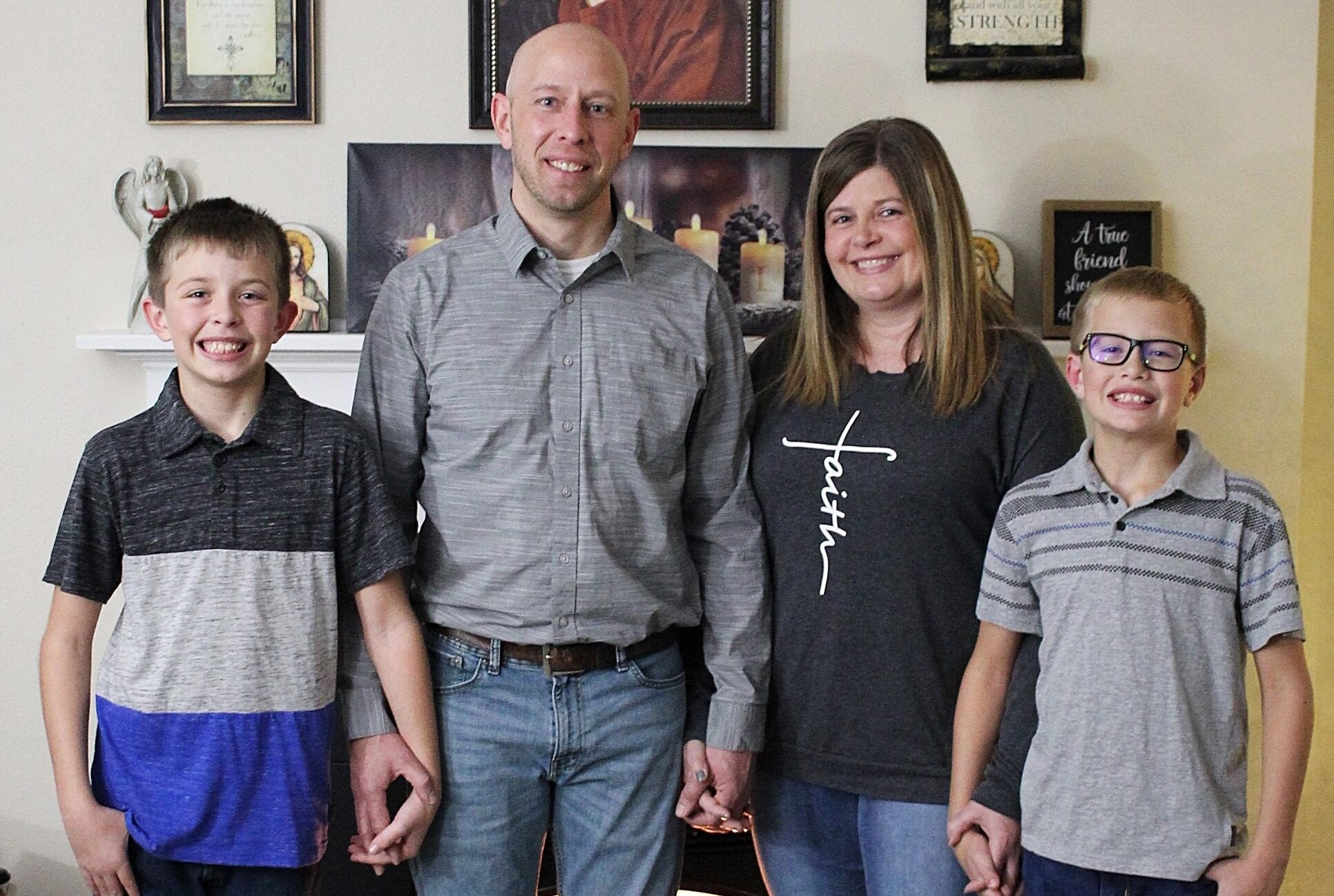 Five years ago, Edgar native Ryan Kraft was searching for something to ignite a fire in him: “I was doing everything right: I was married, we had two boys, a roof over our heads; I had a good job and was able to feed my family. Everything seemed fine. But it just seemed like there should be something more.” So, Ryan began a time of exploration that took him back to his spiritual roots.

Ryan and his three siblings were raised in the Catholic Faith by their parents, Randy and Linda. “The seed was planted at an early age. Our family went to Mass every week at St. John the Baptist Parish and I attended St. John Grade School,” Ryan says. But once he left home, secular life began to pull him away from regularly practicing his Faith. “I went to Mass twice a year, at Easter and Christmas,” he says. “I always knew there was a God, I just never noticed Him.”

Life was busy for Ryan. He went to technical school to get a degree as an HVAC service technician, got a job in his field, married his wife, Nicki, and together they had sons, Isaiah and Dakota. And then Ryan reached a turning point.

“When I was 35, I began to look for something spiritual. I had gone to Catholic school, but I didn’t really know why. I wanted to learn more,” Ryan says. “I ran across some articles on near death experiences. The more I read, the more it seemed like every experience was the same. It couldn’t be coincidental that all of these people saw Jesus and then came back transformed.”

“I kept reading and reading. Finally, I thought I should get a Bible,” Ryan continued. “The first time I read the New Testament, I read it like a story. The second and third time I read it, I remember looking at my life and realizing how much of a sinner I was. That’s when I started to think, ‘Wow, I have a lot of stuff going on that I need to take care of.’

“I was seeing all of my faults through the Bible and I felt like I needed to pray to Jesus. I knew I had some bad habits I needed to get rid of, plus I really wanted to get to know Him.” So, Ryan bought a large picture of Jesus and hung it in their living room. “My wife was kind of surprised when she came home and found that hanging on the wall,” he says with a laugh. “But she didn’t ask me to take it down.”

Through the winter, Ryan prayed in front of the picture three or four times a day. “I just kept praying to Jesus. I wanted to get to know Him, but I needed His help to grow closer to Him,” Ryan says. “Finally, one day, I submitted my will to Him and said, ‘I am yours. I will do whatever You want but You need to help me.’ And just like a snap of the fingers, Jesus was real to me. I had been taught about Him for years and suddenly He was real to me and wanted to help me.”

Ryan says after that experience, everything started to change. “I started to pray more, we started attending Mass weekly. I was hungry to learn what it means to be Catholic. I read books about the early Church and realized that everything I was reading about in those early days was exactly the way the Church is right now. That really struck me,” Ryan recalls. “But there was still one thing I couldn’t figure out—why Jesus was drawing me to Mass.” Ryan says he prayed about it for a few months, trying to decipher his yearning for the Holy Eucharist. And then, one day, Ryan finally got the answer he had been searching for. “I finished my morning prayers by saying, ‘Lord, I love you,’” Ryan remembers. “All of a sudden, I had this vision of the Holy Eucharist with vibrant colors of yellows, oranges, pinks and whites streaming from it. And the Eucharist was coming towards me. I opened my mouth and consumed it. I opened my eyes and looked around the room and wondered what had just happened. Suddenly, I understood the Holy Eucharist is the flesh and blood of Jesus. It solidified everything for me.”

Ryan says the experience was transformative and filled him with a desire to show God’s love to everyone. He began to get more involved at St. John and eventually became a CCD teacher. “That was not something I ever thought I would do,” Ryan admits. “I’m an introvert and I never thought I could stand up in front of people and teach. But then I realized this was God’s will for me, and I couldn’t say no.” He says spending an hour in eucharistic adoration before class gives him the strength he needs. “The Lord fills me with confidence every time. I ask Him to help me know what to teach the kids, and the classes just flow. It shows that when you put things in the Lord’s hands, He will help you out.”

Ryan says he desires to be a witness to his Faith for others. “I understand how personal experience can inspire people. I was always inspired by stories about the saints. I want to help people look at their Faith from a different angle and realize we don’t just go to Mass to sit and stand and kneel at the appropriate times. There’s more to it than that. I want to help them apply the Mass to their life through prayer.”

One of Ryan’s favorite devotions is praying the rosary, and he incorporates it into his everyday life. “I pray the rosary during the workday when I’m driving from one job site to the next,” he says. He even brings his rosary when he partakes in one of his favorite hobbies, hunting. “One of the greatest things about hunting is being in the tree stand and praying the rosary,” Ryan says. “One time, it was a really gloomy day and I decided to recite the Divine Mercy Chaplet at 3 o’clock. The moment I started praying, the sun peeked out for the first time. It continued to shine while I prayed, and then when I ended, the sun went back behind the clouds.” Pausing, Ryan adds, “I know that wasn’t a coincidence. It was God showing me that He is always listening and hearing my prayers.”

Ryan says he doesn’t exactly know what the future has in store for him regarding his Faith journey. “Maybe someday I’ll think about discerning the diaconate, but right now, my vocation is being a husband and a father to my family,” he says. “Maybe the Lord will bring me more experiences down the road. I’m just taking it one step at a time and continuing to surrender my life to Him. I know He will show me the way.”