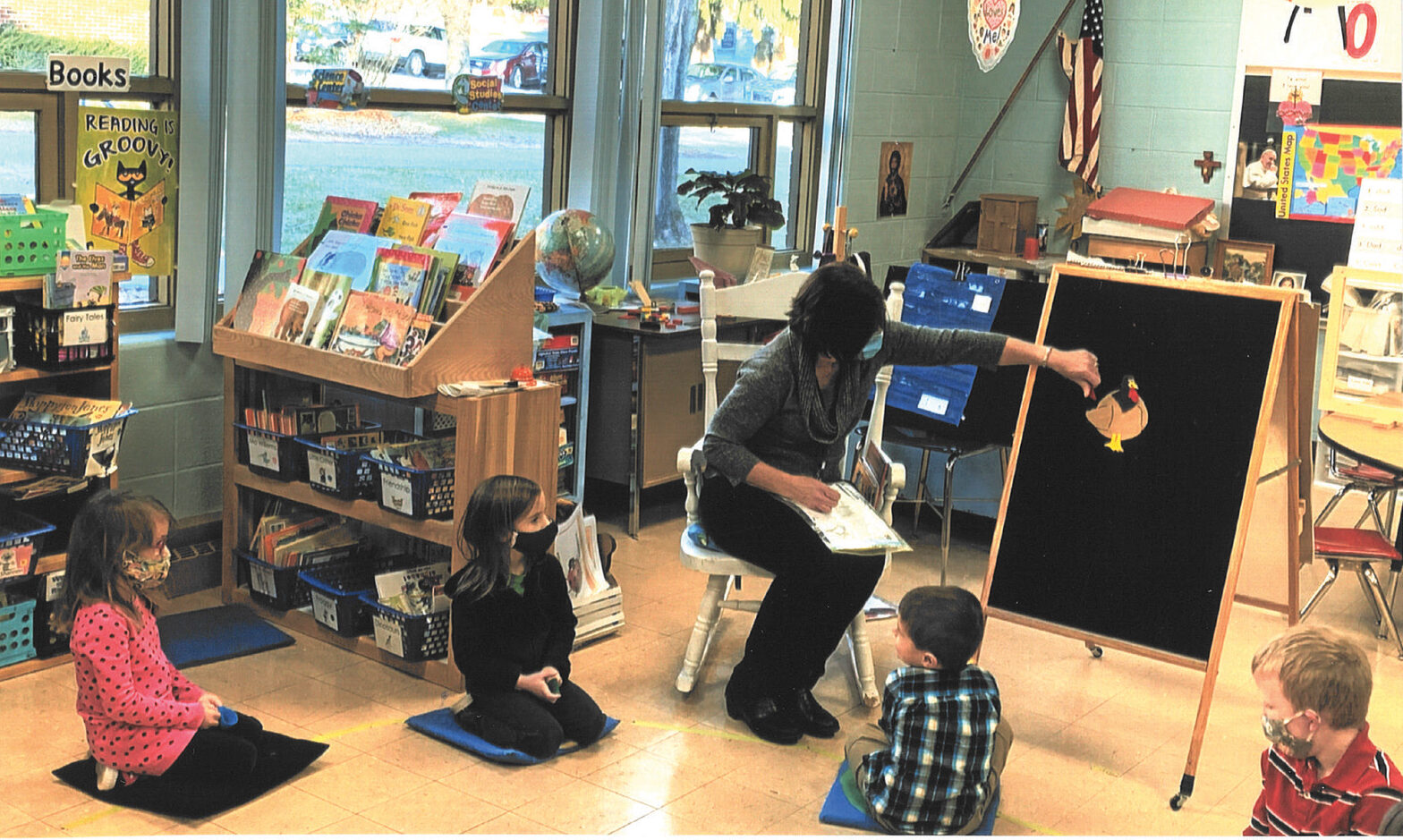 Cindy passes on her Faith in the classroom

When Cindy Mazoch became a teacher almost three decades ago, she knew one thing for certain: She wanted to teach in a Catholic school setting. “I attended Catholic schools from 1st through 12th grade while growing up in Milwaukee. The catechesis I received influenced my life,” Cindy says. “There is such a strong family community in Catholic schools, and everyone—from teachers to students to families—are so supportive of each other. I’ve taught in various Catholic schools in the Diocese of La Crosse for the past 25 years. There is nowhere else I would rather teach.”

Being raised in a Faith-filled home provided Cindy with a solid foundation. “My parents always took my two brothers and me to Mass every weekend from an early age,” she remembers. “Traditions were always very important to our family. I remember passing the oplatki around the Christmas table and going with my grandmother on Holy Saturday to have our Easter basket of food blessed.” Cindy’s teachers also played an important part in her Faith formation. “The sisters did a great job of forming my Faith,” Cindy states. “During grade school, our teachers were Felician Sisters and I went to an all-girls academy for high school, St. Mary’s Academy, where the Sisters of St. Francis were our teachers.”

Cindy remembers “playing school” with her friends when she was a little girl. “I think wanting to be a teacher was ingrained in me at an early age,” Cindy laughs. “Although, when I first went to college, I thought I wanted to become a biologist. It became obvious pretty fast that wasn’t going to work out, so then I turned to becoming a teacher.”

Cindy went to college at UW-Milwaukee and met her husband, Rich, through friends when she was 18. “We dated for a couple years. He talked about getting married, but I wasn’t ready. I needed some time away from him,” Cindy says. When they reconnected months later, they were ready to build a lasting relationship. “My family always went up north and rented a cabin for a family vacation every summer, and I was shocked one year when Mom and Dad said that Rich could come along,” Cindy remembers. “It was on that vacation that Rich proposed to me.”

The little ones are so much fun to teach. They’re all so excited to come in and learn.” – CINDY

The newlyweds settled into married life. A year later, their daughter, Sarah, was born. Shortly after, Rich got a job in Stevens Point and they decided the time was right to make a move. Cindy returned to her teaching career, working at various schools in the Assumption Catholic School system for many years.

The Mazoch family expanded when son Tyler was born in 2001. “Tyler was born three months premature and was in the NICU for a long time,” Cindy says. “So many teachers and families helped us during that time, making dinners for us and offering support,” Cindy remembers. “I don’t know how we would have made it through without them.” Cindy also credits her strong Faith with seeing her through during that difficult period. “It was rough. My husband and I spent a lot of time in the hospital chapel,” she says quietly. “That experience really changed me. I became closer to God, and I know I have a stronger Faith life because of it.”

While Cindy enjoyed teaching various grade school levels, she knew in her heart that she wanted to pursue a goal that she had since graduating from UW-Milwaukee. “I always wanted to go back to school to earn my early childhood education license so I could teach kindergarten,” Cindy says. She decided to attend Viterbo University, traveling to the school’s Green Bay and Milwaukee locations on weekends for two years for in-person learning. While it was a lot of work, Cindy says she is happy she made the career choice. “I’ve taught every grade from kindergarten to sixth throughout my teaching career, but I find I like teaching kindergarten the best,” she says. Cindy has taught kindergarten at Sacred Heart School in Polonia for the past four years. “The little ones are so much fun to teach,” she says. “They’re all so excited to come in and learn. And oftentimes, I am the first experience they have with a teacher. That’s pretty special.”

Cindy enjoys the interaction she has with the children she teaches. “It is so much fun when the kids are enthusiastic. I like to read aloud stories to them and interacting with them through games and songs is such a joy,” she says. “That’s why the thought of virtual learning during the pandemic is so difficult. There is something special about interactions that take place between a teacher and a child. When you have to do that virtually, so much could get lost in the process.”

Inspiration can be found in many places when Cindy teaches. “I read a lot of professional books and watch webinars to look for new ideas,” she says. “And there are times when something the kids bring up inspires me. They’ll ask about something, we’ll talk about it, and then I’ll find additional information that I can share with them.”

Cindy also uses some of the teaching methods she learned through the Catechesis of the Good Shepherd (CGS) course she took in Wisconsin Rapids these past two summers. CGS is based on the Montessori principles of education and was developed in Rome in 1954 by Sofia Cavaletti, a Catholic Hebrew and Scripture scholar. “I have a model altar set up in my classroom, and I teach the children about various elements of the Mass and our Faith,” Cindy explains. “They may learn what a sacristan does, how to prepare the water and wine or what the different colors of the priest’s vestments mean. It’s a hands-on experience and the young children seem to love it.”

When not teaching, Cindy enjoys cycling with her husband. “Rich and I go on a lot of bike trails in the summer. We may ride 10 or 15 miles on a weekend,” she says. “It really recharges our batteries.”

Cindy is also an avid painter and enjoys incorporating this pastime into her teaching. “My dad is very artistic and I think it’s an inherited trait,” Cindy says. “Being artistic has become very useful for me in my teaching. I can make my own patterns for art projects, or if I see something I like, I can re-create it for my own use. It’s very helpful.” Cindy paints pumpkins for her students at Halloween, and each student can choose what they want on their pumpkin. “I’ve painted a lot of different things on pumpkins over the years, from dinosaurs to ghosts to ‘Paw Patrol’ characters,” she chuckles.

Cindy treasures spending time with her young grandsons, Sawyer and Levi, and is looking forward to teaching them when they reach school age. “My daughter gives me a hard time about it, because I never wanted to teach my own children,” Cindy laughs. “I tell her teaching your grandchildren is different than teaching your children!”

Being a veteran teacher, Cindy can offer some advice to new teachers just beginning their career. “It really helps to have a great mentor,” she says. “In those first couple of years of teaching, I felt like I didn’t know what I was doing. I had to be patient with myself, realizing that I couldn’t possibly know everything right away. That would only come with time and experience.”

Cindy says there are a few qualities that she believes makes an excellent teacher. “You need to be a good role model, someone who is understanding and compassionate,” she says. “I believe that if the teacher is really enthusiastic about her job, the kids will love school and want to come every day.” Pausing, she adds, “One of the greatest joys I have as a Catholic teacher is being able to share my own Faith with my students. I am grateful every day for that unique opportunity.”