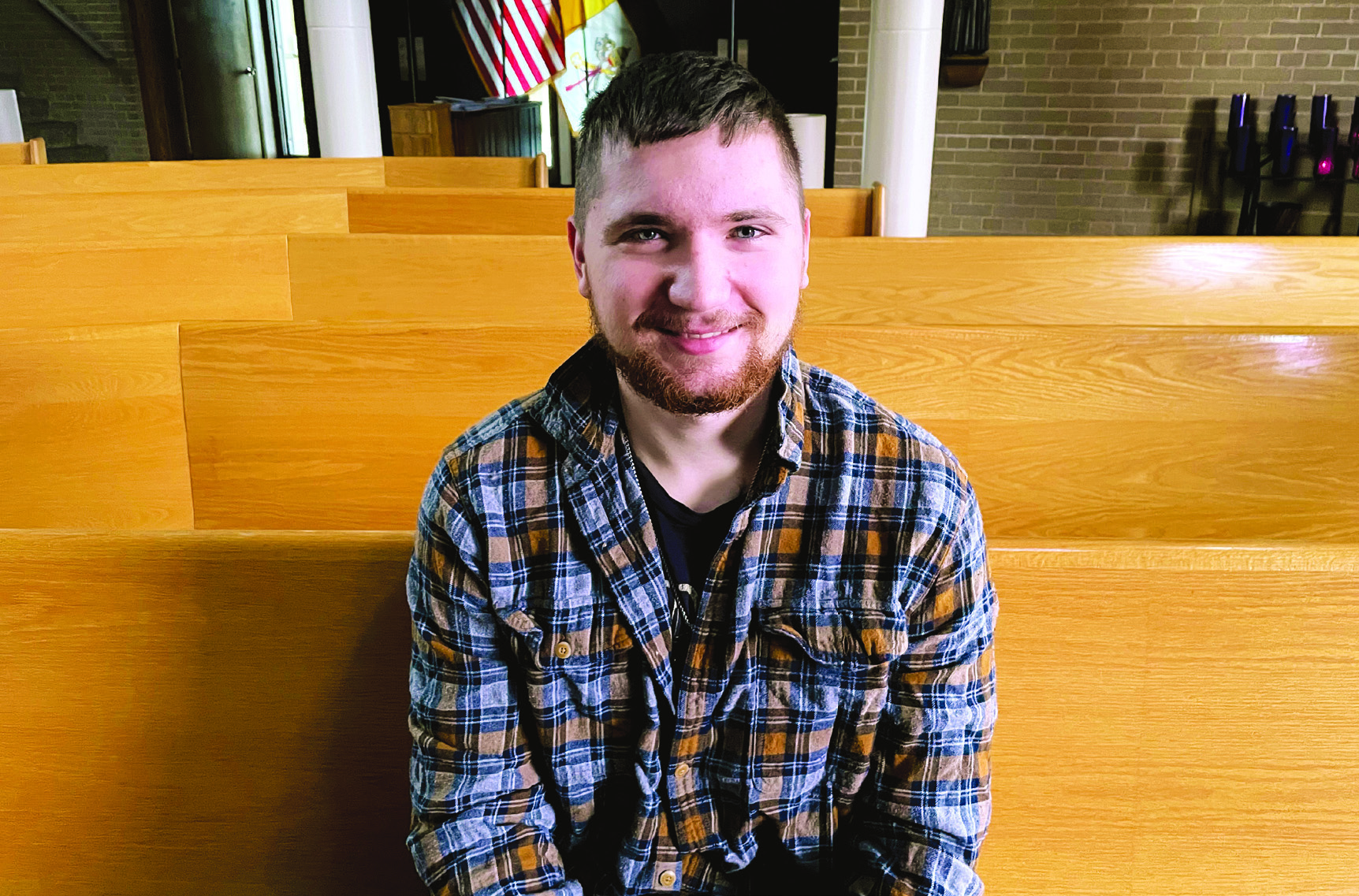 There are defining moments in life when one’s perspective moves from “before” to “after.” For many of us, these experiences are tied to powerful emotions, reminding us of the transformation we have undergone. For Andrew Steege, this was his journey to the Catholic Church.

From a young age, Andrew had been involved in religion on some level. He and his mother lived with his grandparents who were Christian. With a soft smile and reminiscent look, Andrew recalled his grandmother’s role in his life growing up. “My grandma was always telling me about my guardian angel and taking me to church with her,” he said. Andrew’s grandmother was constantly reminding him that he was not alone. “God is watching over you,” she would say. Andrew and the other children went to Sunday school while the adults stayed upstairs to hear the preacher. His mother was not part of any religion, and his peers spoke disparagingly about their Sunday obligation. “My mom never spoke about any religion. And when I would bring it up saying that we should go, she would brush it off and tell me ‘there’s a church down the street you can go to.’” he recalled. So, as middle school approached, Andrew made the decision not to be confirmed in his church but to wait until he felt more prepared.

Shortly after that, he and his mother moved to a new town,
and he started middle school.

As Andrew described his pre-teen years, he quieted himself to think. His soft brown eyes had a distant look as he described that time of withdrawal in a low voice, “I just didn’t follow anything, or practice anything or really believe in anything at all.” Andrew decided he was an atheist. He did not believe in anything, and this held true for him as he grew to high school.

It was in high school when he became more argumentative. “I wanted to pick a fight to argue about other’s beliefs, just to test them. Politics, science, religion, it didn’t matter. I just wanted to argue with everyone.” Andrew loved debating with people who believed in God. He loved finding holes in their arguments and discussing this all with them. Eventually, Andrew made friends with other students who felt the same way. He continued to become more withdrawn and alone. His friends seemed to be okay with thinking that there was no purpose for them, but Andrew felt nothing but emptiness and hopelessness.

He fell into a deep depression and was struggling with suicidal ideation. If there truly was no God or a grand plan, then Andrew saw no reason to live, and so he made a plan. In a dark emotional place, reminiscent of the Garden of Gethsemane, he was alone at home and the timing was right. He’d written a note to his mother, and he thought he was ready. But it was like something came over him. “It felt like someone was holding me and I knew I couldn’t do it,” he said. With a shaky voice, he recounted the experience. “I didn’t understand why I couldn’t do it. I’d been planning this for weeks, but something or someone was holding me back. He [God] was saving me from myself and pushing me forward.” Andrew did not attempt suicide that day.

In the aftermath, Andrew’s world continued to crumble. His friends pulled away, and his depression worsened, leaving him feeling more isolated than ever before. Until, one day, he met someone new at school his senior year. Her name was Reghan, and they became casual friends; eventually, he discovered she was Catholic and belonged to St. Patrick Parish in Onalaska. Andrew was thrilled to discuss religion with her and was ready to poke holes in her ideas, but Reghan was sweet, kind and patient with all of his arduous discussion. “On my birthday, Dec. 31, she came to hang out with me and needed to go to Mass the next day because of the holy day, so she invited me to go with her and that was really my first interaction with a church in years.”

It all seemed so foreign and strange, yet so intimate. Andrew was able to sit with her and take it all in during the Mass. The people were there to worship together, and he could feel their devotion. Andrew said, “It felt right. It felt intimate. Like they weren’t just there telling you a speech. They wanted to have a personal talk with you, but with everyone in the church.” Worshipping together is a powerful experience, and he had questions. Afterward, they had a bit of a drive together, so Andrew asked Reghan many questions. He wanted to know about the liturgy, sacraments and philosophy, and they talked through them all on that trip. In the following weeks, he spent time processing his first Catholic Mass experience, and, when Reghan again invited him to go with her family to Mass, he jumped at the opportunity.

This time, it was Ash Wednesday, and Andrew was able to listen, experience and dive deeper into the liturgy. With a smile that spread from ear to ear, Andrew said, “I was thinking already about becoming part of the Church since going with Reghan for the first time, but this Mass let me take it all in and I just fell in love with it.” Sitting with Reghan’s family, he felt a sense of belonging and was no longer self-conscious about his presence at this new church. “The Catholic Mass felt like coming home. When the priest was speaking, I felt like he was speaking directly to me. It was like someone picked readings that were meant for me, and I needed to hear more. Walking into the church, sitting in that pew and having the whole community worship with you is a surreal feeling.” From that day, Andrew accompanied the Sage family to Mass on Sundays. Reghan’s father, Robbie, was happy to answer even more questions after Mass each time. “After Lent, it became more about being a part of the Church, instead of just attending a church. So, we started talking about ministry and I learned more about becoming Catholic.” They all spent time together, and Andrew learned what the Catholic Church is about. Robbie and Reghan encouraged him to learn more, and his inquisitive nature led him to Andrew Brueggen, the youth minister at St. Patrick Parish and eventually to RCIA (Rite of Christian Initiation for Adults).

Everyone in my family was so supportive of my decision to join the Catholic Church.

Having graduated from high school and started a new job, Andrew’s life was busy. He was working full-time and was unable to attend the scheduled RCIA classes at St. Patrick Parish. Mr. Brueggen was patient and kind and made time to meet with Andrew weekly at a coffee shop. Instead of the regular hour-long classes, Andrew spent upwards of three hours, learning and discussing with Mr. Brueggen. “We just kept talking about ideas and beliefs and how it all comes together.” He was taking a deep dive into the Catholic Church and falling in love more with each question. Andrew’s grandmother was supportive. “She was the only person in my life who encouraged me to find a church for the longest time, even if it was not her religion. As soon as I became involved at St. Patrick Parish, I told her and she was stunned, but so happy. Everyone in my family was so supportive of my decision to join the Catholic Church.”

Andrew was on track to be welcomed into the Church at the Easter Vigil Mass in 2020, but God had other plans. With the rise of COVID-19 and the closure of many churches, Andrew was understandably upset. He longed to become part of the Faith he had learned so much about. With some masked maneuvering, Andrew joined the Catholic Church in the spring of 2020 in a private Mass with a small number of his supporters. His grandmother, parents and the whole Sage family came there to support him. Andrew smiled as he recalled that day. “My family isn’t religious at all, but they came to support me anyway.”

Reflecting on his life, the 20-year-old recalls it in terms of “before” and “after.” “Before, I went through my day and never took the time to think about life,” Andrew said. “I never questioned anything, and I just went through the motions. But after I received the Eucharist and started practicing my Faith, I had a whole new perspective. It’s the knowledge that I am not alone. Whether I see it or not, God has a plan for me, and he died so that I could live. I know that God has a plan for my life, and it’s just beginning.”