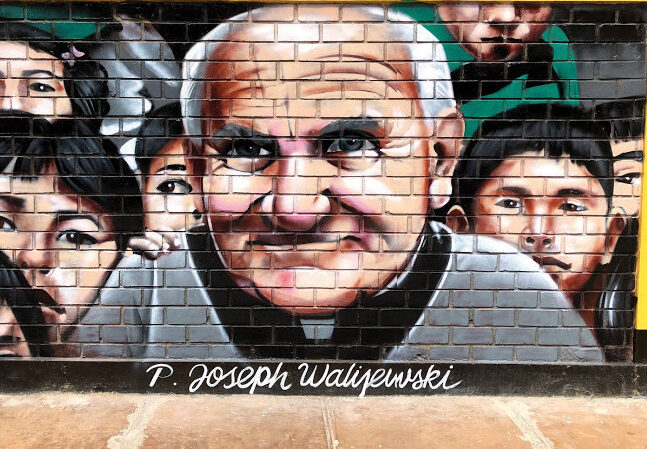 A Missionary Disciple Bears Witness to the Glory of the Resurrection

We are blessed in the Diocese of La Crosse to have as part of our history two of the highest possible examples of missionary discipleship. And here I am talking about missionaries in the classic sense of the word–messengers of the Gospel to distant lands. They are Servant of God Father Joseph Walijewski and Blessed Brother James Miller. God-willing, both men are on their way to canonization as saints.

Father Walijewski’s story is widely known. He was a priest of our diocese and the founder of the orphanage Casa-Hogar Juan Pablo II, in Lima, Peru. You can read about him and his lasting legacy at frjoesguild.org. Blessed James Miller, a native of Stevens Point, who joined the De La Salle Christian Brothers and became a missionary, is somewhat less well known. He died a martyr on Feb. 13, 1982, gunned down while repairing a wall at the school where he worked in Huehuetenango, Guatemala. He was beatified by Pope Francis on Dec. 7, 2019. You can read about him at diolc.org/blessed-miller.

What did these two men have in common with each other and with all missionary disciples? Simply this: Amidst the sin and the sufferings of this world they clung, with utmost hope and confidence, to the glory of the risen Christ. As disciples, they sat at His feet, opening themselves to His grace through prayer and the sacraments. As missionaries, they poured out their lives in His service. They rejected comfort and safety and chose to enter the thick of human suffering and strife, embracing the truth that the path to Easter Sunday must pass through Good Friday. While only Brother James died a martyr’s death, Father Joe spent his last ounce of strength serving the poor of Lima, Peru, dying of pneumonia and acute leukemia in 2006–dying “with his boots on.”

Our circumstances are likely not so dramatic, but the principle remains the same. Life is hard. Indeed, Jesus told His apostles, “In the world you will have trouble, but take courage, I have conquered the world.” (Jn 16:33) When did Jesus say this? Of course, He said it the night before He was crucified. To make sure they understood, He said, “You … are now in anguish. But I will see you again, and your hearts will rejoice, and no one will take your joy away from you.” (Jn 16:22)

So it is that, like Father Joe and Brother James, a missionary disciple understands the Lord’s call to take up the cross and follow Him but always in view of the glory of the resurrection and the joy that cannot be stolen. The world is hungry for this message. It needs us to be such missionaries of hope, bearing witness daily to the triumph of the resurrection, even when it sometimes feels like Good Friday. If we pray for the grace to do this, the Christ we love will work through us to draw those we meet into His glorious, unending light.