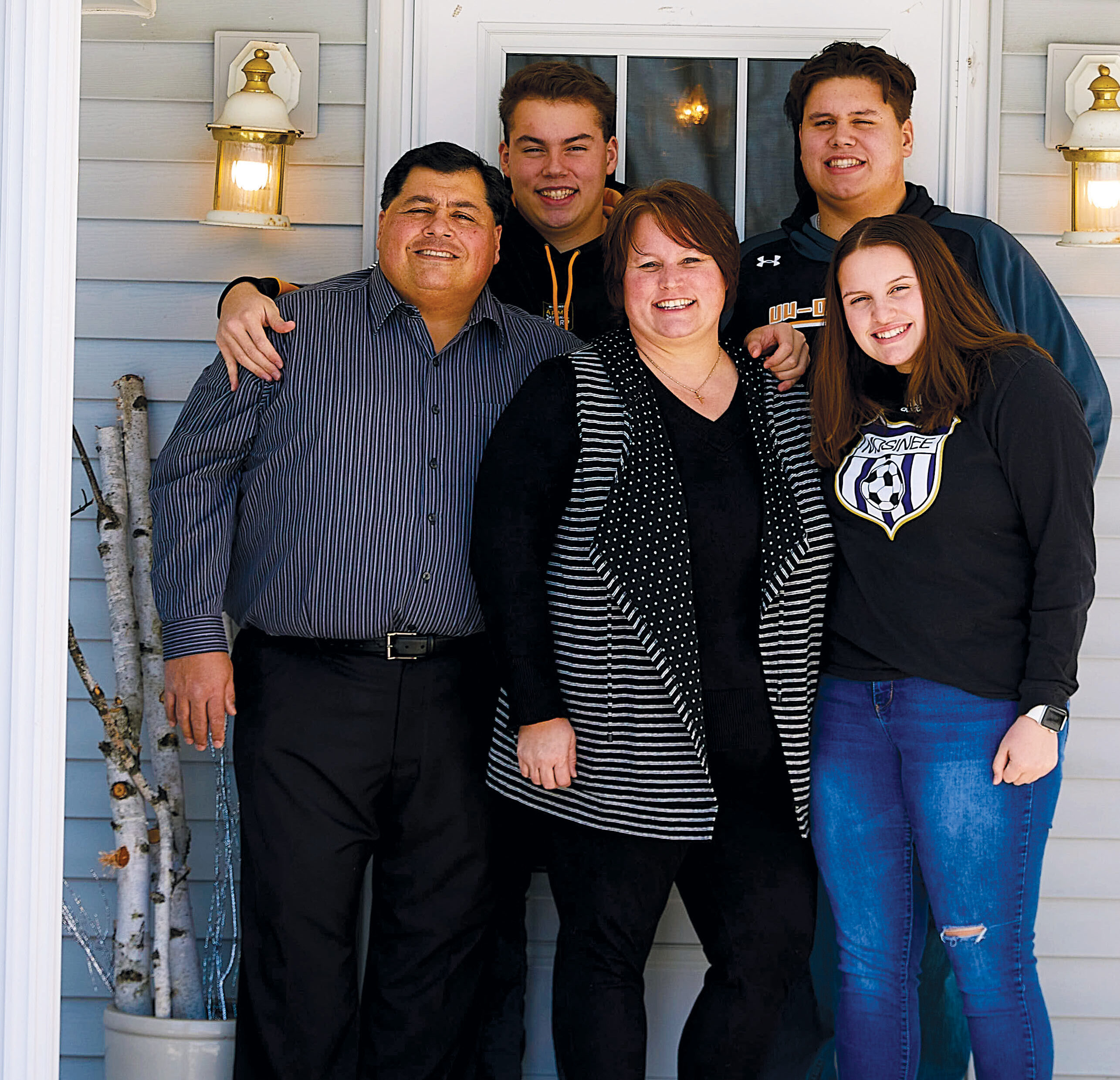 David and Deanna with their daughter, Gabriella, and sons Zachary (L) and Michael (R)

David and Deanna Muñoz say they and their three children, Michael, Zachary and Gabriella, have a family theme by which they try to live: “Faith, Hope and Love—What Our Family is Built On.”

“Our family is all about service and loving people.
We believe we are called to put our Faith into action.
It’s not about us … it’s about being good to others and bringing glory to God in the process,” Deanna explains.

David and Deanna both say they were taught this important family value from their parents. “My father and mother were almost embarrassingly giving, whether it was with time, talent or treasure, and that was instilled in me from a young age,” David says. “Giving of themselves is a huge part of my parents’ being. As I grew up, there was always food going out of our house to feed the hungry.” David’s father, Ricardo, is a deacon for the Archdiocese of Milwaukee. Deanna adds, “He married us, baptized our children and presided over our daughter’s quinceanera, which is very special.”

“David and I are both blessed to come from strong, Catholic families. Both our parents have been married for 50+ years. What a beautiful model they have given us,” Deanna continues. “My parents taught me the importance of having a strong relationship with Jesus. As a child, I remember them praying every night with me before I went to bed. They also taught me the importance of attending weekly Mass, eating meals as a family and the importance of active participation in parish life. I am very grateful for their strong example.”

Though David was born and raised in Fond du Lac and Deanna in Zimmerman, Minn., they met in Manitowoc as first-year teachers. Their athletic director set them up. “We knew from the beginning that our values were in alignment,” David says. “We talked about having children and how we wanted to raise them.” They dated for six months and were married seven months later. In June, they will celebrate their 21st wedding anniversary.

Our family is far from perfect, but we rely on God’s grace, love and mercy.”

“We had an incredible parish priest during our pre-marriage formation,” Deanna remembers. “He told us that if we mess up, it’s not enough to just say, ‘I’m sorry.’ You need to look your spouse in the eye and say, ‘I’m sorry, will you please forgive me?’ That has been a very powerful lesson in our married life. It puts the power in the other person’s hands, whether to forgive or not. We are quick to forgive.”

David and Deanna’s oldest son, Michael, is a sophomore at UW–Oshkosh, where he is studying to become a teacher and plays football for the Titans. Four years ago, Michael and Deanna shared a unique experience when they travelled to Peru to volunteer at Casa Hogar Juan Pablo II, a mission of the Diocese of La Crosse, which opened its doors to homeless children in 1985. “This experience at Casa Hogar was a turning point in Michael’s Faith life. It gave him the opportunity to see his Faith in action and radically changed his life. I could really see the Holy Spirit working in him. Michael decided he wanted to become a teacher soon after this trip,” Deanna says. David adds, “He is very goal orientated, faithful, tender-hearted, playful and has a good head on his shoulders. We are excited to see him teach and coach in the future.”

Their second son, Zachary, is a high school senior at Mosinee High School. Following graduation, Zachary will be attending UW–Whitewater this fall. He plans to enter the Reserve Officers Training Corps to become an officer. “Zachary is interested in pursuing education with a possible military component. He has always wanted to serve others and he’s been exploring different ways to do that,” David says. This year, Zachary has been helping teach eighth-grade faith formation class. “Zachary was also an altar server for seven years. He loved being at the altar when he was growing up … he was close to the action,” David continues. “Zachary takes his academics seriously, has been active in sports and is an Eagle Scout. He is a strong leader, reverent and has a beautiful gift of service. It will be fun to see how his life unfolds.”

David and Deanna’s youngest child, Gabriella, may only be 15 years old, but she is already certain about what she wants to do with her life. “Gabriella is looking at attending the Franciscan University of Steubenville in Ohio to become a pro-life advocate,” David shares. Deanna says the seed was planted in their daughter’s heart after they watched the movie “Unplanned,” the real-life story of a former Planned Parenthood director who became a pro-life activist. “Gabriella spent time in adoration before the Blessed Sacrament during her confirmation experience. It was during this special prayer time with Jesus that her heart has been filled with purpose and desire to enter the pro-life field,” Deanna says. Gabriella is currently working on a parish-wide baby shower/bottle drive at St. Paul Parish, supporting a crisis pregnancy center. “Gabriella is a kind-hearted, spirited and fun-loving girl who is committed to her studies at school and is a three-sport athlete. She has many dreams in her heart to help people and she has a great deal of Faith,” David says.

“Our family is far from perfect, but we rely on God’s grace, love and mercy,” Deanna says. “David and I made some very conscious decisions early on in our marriage. As soon as our first child was born, we decided that I would leave teaching to stay home and raise our children,” she explains. “That was a very mindful decision on our part. I know not every family has the opportunity to do this, but it is the choice we made for our family. I am thankful for that time and believe it made a tremendous difference in our family life.”

“Setting time aside each day to pray … has led to our happy marriage.

Deanna stayed home for 10 years with their children before returning to the teaching profession. Currently, she is a physical education teacher in the Stevens Point School District at McDill Elementary. “I find so much joy teaching and working with students, families and my fellow colleagues,” Deanna says.

David was a teacher and football/wrestling coach before becoming a school administrator. He is the superintendent of schools for the Mosinee School District. “Serving the Mosinee community is an honor. I work hard to build strong relationships and provide opportunities for students. It is a passion of mine,” David says. He describes himself as a servant leader, a concept first coined by Robert Greenleaf in 1970. “Both Deanna and I feel we have a calling to serve and to lead. As a servant leader, you try to be as selfless as you can,” David says. “It is important for me to not spend too much time in my office, but rather to be working alongside people.”

No matter the responsibilities that David and Deanna carry in their professional lives, they know spending time with their family is critical, even as their children are approaching adulthood. “Family meal time has always been important to us,” Deanna says. “We genuinely enjoy hanging out together. There is always a lot of laughter!” David agrees, saying, “Being truly present for your family makes all the difference. Attending every extracurricular activity while cheering them on and having meaningful conversations is what matters most in family life.”

Deanna and David realize families face many challenges, especially in the current culture. “I always say parents have two choices, parents can raise their children or the world will,” Deanna says. “Everyone needs to put down their phones and engage with their families. Social media addiction is hurting our families.”

“We believe it’s important for parents to take their children to Mass every week, even when the kids are young. We remember taking our first born, Michael, to Mass early on when he was a busy toddler. Sometimes we would be positively sweaty at the end of Mass. But I knew in my heart we were doing the right thing,” Deanna says. “Nowadays, when we see a young family at Mass, we encourage them and tell them they are doing it right! It works! Making the effort now, even when it’s hard, is one of the most important things they can do for their family.”

The Muñozs believe a strong marriage is one of the keys to a strong family. “Deanna and I are each other’s best friend—we always have been,” David says. “Setting time aside each day to pray, connect in conversation and support each other has led to our happy marriage.” Deanna adds, “We don’t believe in falling in love. We believe that we choose to love each and every day. The sacrament of marriage is a bond that we hold deep in our hearts.”

David and Deanna have worked hard to be deliberate with how they have raised their children. “We understand that we all fall short at times. The power of getting on one’s knees, asking for forgiveness and then trying to do better is key,” David says.

“Lately, we’ve been talking with the kids about the importance of choosing their future spouse, the one God has made for them. I was praying for my children when they were in my womb. I was even praying for their spouses,” Deanna says with a chuckle. “There is so much done when we pray and seek God.” David adds, “I have always told our children, ‘If you want to find the right spouse, go to Mass or take a person on a date to Mass. That will tell you a lot about the person right away.’”

David and Deanna agree that their favorite time of week is when the family goes to Mass together. “It’s so special when we’re at Mass and my husband puts his arm around me and our children are in the pew with us,” Deanna says softly. “There is just no better place on earth.”