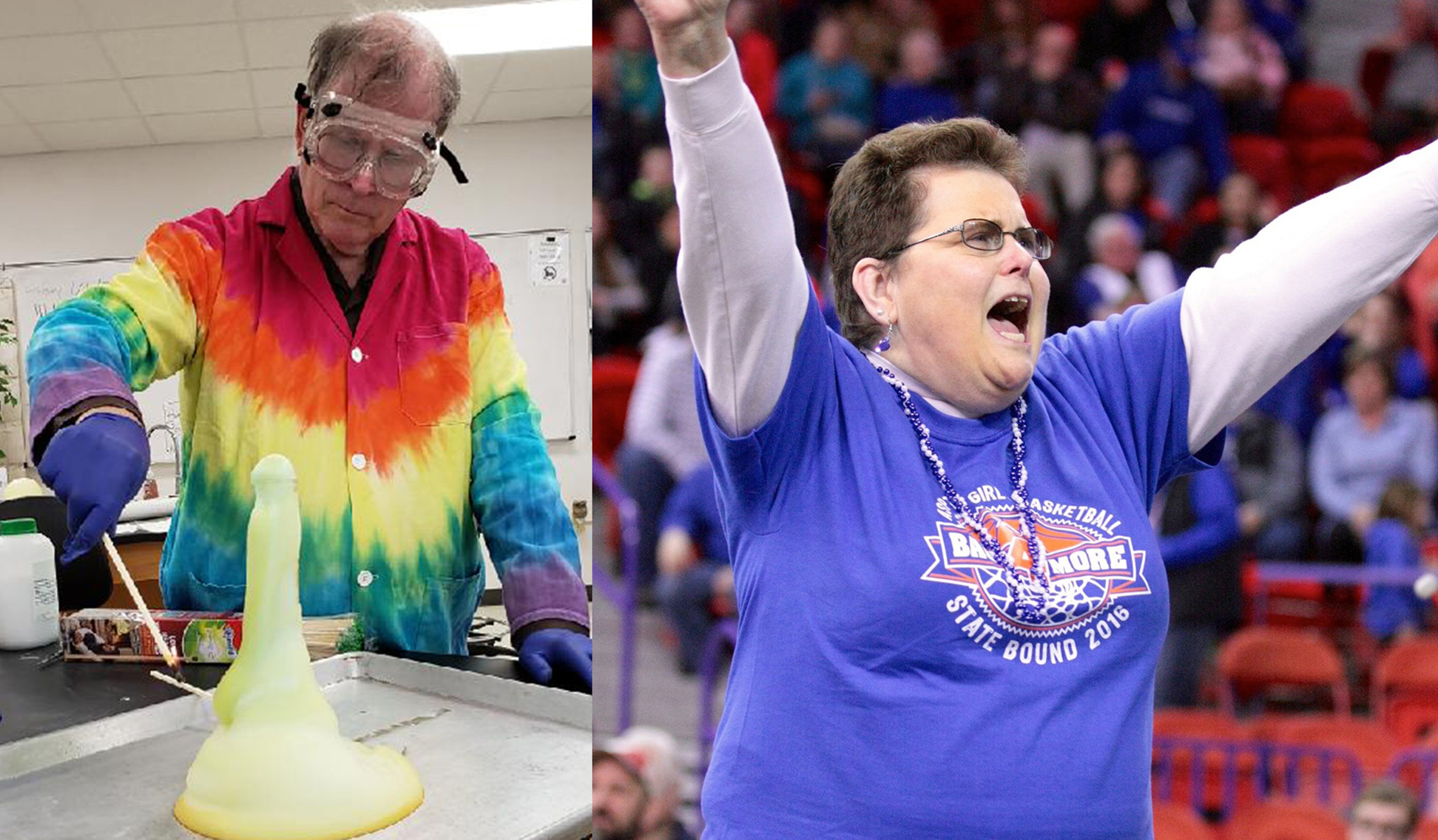 Allan and Susan Glinski of St. Vincent de Paul Parish in Wisconsin Rapids are “an unforgettable couple,” shares friend and former co-worker Pat Hoffman, secretary at Assumption High School. I think anyone would agree. When they enter a room, you know they are there; the energy and excitement immediately go up a notch. “Allan and Sue always color coordinate their attire,” Pat added. “Their demonstration of love and kindness to one another is visible to all.”

Originally from Stevens Point, Allan attended St. Peter Parish and he and his sister Marilee graduated from Pacelli High School. Sue grew up with her two sisters and two brothers in neighboring Wisconsin Rapids. Both come from generations of paper industry people.

Both Allan and Sue attended the University of Wisconsin–Stevens Point for college, where he asked her to be his physics lab partner freshman year. They continued to have classes together each semester and each graduated with a bachelor of science degree. Shortly thereafter, the two were married at Ss. Peter and Paul Parish in Wisconsin Rapids. They moved to Appleton, where Allan continued his education at the Institute of Paper Chemistry at Lawrence University, following in his family’s paper-making legacy.

Living in Appleton, the Glinskis had their first child, a daughter, Ann. When Allan’s schooling was complete and he had earned his master of science and then his Ph.D., he was offered a position with Great Northern Paper Company in Millinocket, Maine. The family made a move cross-country, far from family and all familiarities. But Allan and Sue have always had a spirit of adventure and enjoy the outdoors, so building a life in the river town of Millinocket—overlooking picturesque Mt. Katahdin and the northern terminus of the Appalachian Trail—seemed a good fit.

You need to constantly reaffirm your students, be enthusiastic and a little crazy. Show them how much you enjoy your subject area.” -Susan

The Glinskis quickly got acquainted with the local parish, St. Martin of Tours, and involved their young family in the active Catholic community. A son, Joseph, was born during their early years in Millinocket.

Sue relates a story about their first days in their new town. Admitting she has a big singing voice, she, as a newcomer, was quickly noticed by the small, close-knit church community. “The organist of over 50 years welcomed us to the parish and asked me if I played the organ,” she explains. Sue told her she did, that she had been playing at her childhood parish since she was 13. Immediately, the organist took Sue under her wing, ready to pass on the post. A month later, the organist passed away somewhat unexpectedly, almost as if she was just waiting for her replacement. Sue became the sole organist in the parish for the 13 years the couple called the small community of 7,000 home.

While in Millinocket, Sue became the director of religious education and treasurer of Daughters of Isabella and Allan had a stint as president of the Parish Council. Together, she and Allan served their Catholic community through the Worldwide Marriage Encounter, Christian Life Retreats, Family Life Committee, Parish Council, choir and as religious education teachers. To the Glinskis, living more than 1,500 miles from any family, their parish became home. “In Millinocket, we were essentially alone,” the couple shares, “so the Church became our family.”

In 1989, Allan received an unexpected call and opportunity from Consolidated Paper Company in Wisconsin Rapids. The couple struggled with the thought of picking up and moving away from the life they had built in Millinocket. They weighed the pros and cons, ultimately opting to make the move back to Central Wisconsin to be closer to their families.

In breaking the news to their daughter, Ann, who was then attending college in Maine, she responded: “Kids are supposed to move, not parents!” But Ann did follow her parents to Wisconsin, and so did a young man, who ultimately became her husband.

Upon moving to Wisconsin Rapids, Allan settled into his new position at Consolidated. He progressed through several positions in the pulp and paper-making mills before retiring as the vice president of research. Sue returned to UW–Stevens Point to obtain her teaching degree. She took a math teaching position at Assumption High School. St. Vincent de Paul became the couple’s parish home, where they became involved in many ministries, picking up where they left off in Millinocket.

At Assumption, Sue became “Mrs. G,” a booming voice of discipline and, most importantly, of school spirit. Secretary Pat Hoffman and Mrs. G became fast friends, starting “Pep Club” together and energizing the high school crowd into a spirited group; this helped to transform the whole morale of the school. It didn’t take long before Mrs. G developed her own cheer to lead at games and pep rallies, an honor she still holds today.

In 2006, Allan retired from the paper industry, but being a guy who can’t sit still for long, he began subbing at Assumption, alongside Sue. The following year, a science teaching position became available at the school, which was a perfect fit for Allan. Together, the couple helped the school with fundraising and the execution of new science classrooms, a major undertaking. They team-taught middle school students ballroom and rock dancing in gym class. The couple served side-by-side for six years of full-time teaching before they retired in 2013.

However, they chuckle when asked when they retired, because the Glinskis are still a mainstay at Assumption as substitute teachers and supporters. Allan also taught a winter symposium, “Creations and Explosions,” at the school with his sister Marilee last year. The siblings, donning matching tie-dyed lab coats, led 35 labs in two weeks—making a lot of noise and having a lot of learning fun. When asked how they motivate high-schoolers, Allan joked, “You keep them awake!”

Sue added, “You need to constantly reaffirm them, be enthusiastic and a little crazy. Show them how much you enjoy your subject area.”

Allan and Sue’s granddaughters, Rebecca and Maria, have attended Assumption Catholic Schools through the generosity of their grandparents. Not only have they financially supported the girls’ schooling, the couple have supported them (and a third “adopted granddaughter,” Katherine) by following all of their activities throughout their school years. Allan has gone so far as to team up with his son-in-law, Phil, to coach Maria and Kate’s tennis team!

Just recently, as Maria and Kate’s basketball team went to state, Allan and Sue were there in La Crosse to help cheer them on to their state title and also witnessed Maria singing the national anthem with a teammate to start both tournament games.

These days, one can find Sue deep in a book or newspaper, Allan playing cards, and both of them continuing to support Assumption High School from afar, attending their weekly adoration appointment with Jesus at the Marian Center, and carrying on their respective ministries at their parish. The Glinskis long for the day when they can resume attending their local dinner and dance club and their many travel adventures.

The couple find great joy in attending weekend Mass at St. Vincent de Paul, “where it is not unusual to see Sue at the piano and organ, Ann and Rebecca leading the congregation in song, Phil doing the readings and Maria and Katherine distributing Communion with Grandpa,” Allan shares.

Allan and Sue celebrated their 50th anniversary this past June with Mass and a small family dinner party. Looking back on their marriage, which they offered to Our Lady half a century ago, they can be proud of the life they’ve created, saying, “We have always listened to God’s plans for our life and He had always led us.”