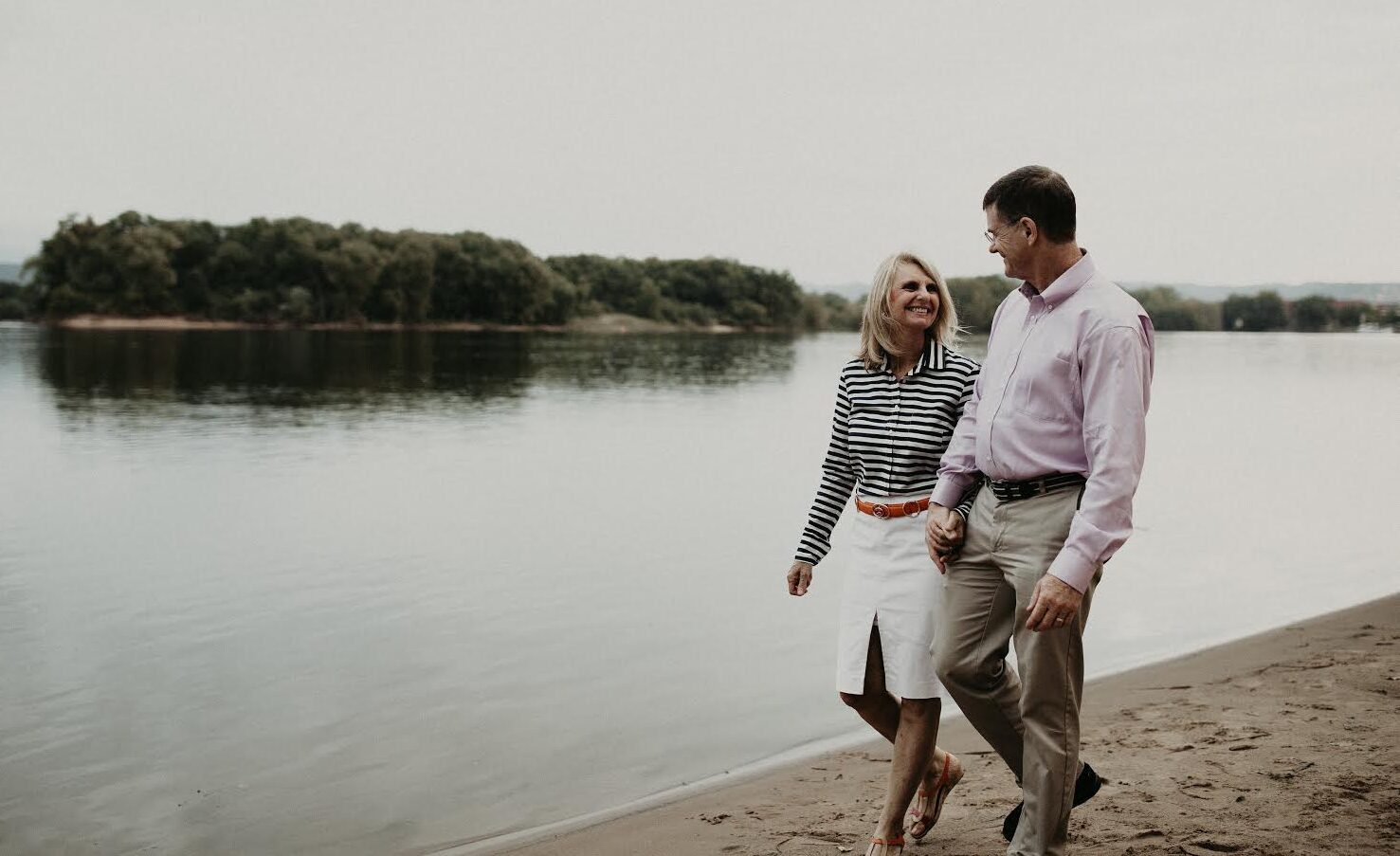 Dr. Scott and Jill Marshall’s lives have been directed by signs from God. An easygoing and Faith-filled couple, they live on a quiet cul-de-sac in La Crosse and have six children and eight grandchildren.

The pair met while living in San Antonio, Texas, where Dr. Marshall’s family lived. During Advent, Jill’s church hosted Christmas caroling nights where young professionals could gather and sing along the San Antonio Riverwalk. Jill was hesitant but finally decided to go. There, she met a handsome, brown-haired man with a mischievous smile. Jill said with a chuckle, “I remember driving home and telling my roommate, ‘That’s the kind of guy I could marry.’” At the next caroling night, Dr. Marshall made sure he was there and looked for her. Reflecting on their meeting, he said, “Isn’t that just the story of my life. Always being led to church through the women in my life—Mother Mary, my own mother and Jill.” Eventually, they were married.

Early in their marriage, while Dr. Marshall was finishing medical school and their family numbered four, they moved to Rochester, Minn., for his residency. Though Jill was a full-time nurse, she felt a calling to stay home with her children. She promised God, “If I can stay home with the kids and not go to work, I’ll start going to daily Mass.” Dr. Marshall had found work, but when Jill began looking, she found there was a hiring freeze on all nurses and took this as her sign to stay home. She started attending daily Mass and never looked back. “It’s incredible,” said Jill, “how much deeper my Faith has grown, all from my one ask of God.”

“You know, those were hard years,” Dr. Marshall recalled. “To make ends meet, I’d leave work on Friday at 5:30 p.m., and head right to Waseca, where I’d work in the ER until I came back to work Monday morning in Rochester. I was working all the time to pull us through, but somebody had to uphold us spiritually and it was Jill the whole time.”

“It’s incredible how much deeper my Faith has grown, all from my one ask of God.”  -Jill

“It was kind of a miracle how we ended up here,” Jill said. Now that residency was over, they were looking to settle down. “We’d never been in La Crosse but had driven through, and it was beautiful. When we came for an interview, we stopped at the cathedral to pray, and this was the first time we had gone to adoration together. My prayer was: ‘If this is where we’re supposed to be, let me know there is perpetual adoration here.’” Dr. Marshall completed the interview, and they returned to Rochester to wait on news. While at daily Mass, Jill ran into a friend in whom she confided about this move. She told them how she needed to be sure the sacraments and, specifically, adoration, were readily available there. Her friend said, “Well, you know there are the Sisters of Perpetual Adoration in town?” This was Jill’s sign of God’s plan for them. “So then I knew that this was God’s plan for us, and everything worked out perfectly. This is where we were supposed to be.”

They settled in La Crosse and their family continued to grow. They enrolled their kids in St. James Catholic School, only to find out the school was soon to be closed. After much prayer and conversations with other affected families, the idea of starting a charter school emerged. “As parents, we are the primary educators of our children,” said Jill, “and it’s up to us to find the best for them.” With the conviction of the Holy Spirit and diocesan understanding, they set out in January 2005 to start a school, and by August of the same year, Providence Academy opened its doors. Dr. Marshall said, “It was the wives who made this happen. Jill and her friend Mary worked tirelessly to get that school operational, and it still thrives.”

After having risen to many occasions, Dr. and Mrs. Marshall say that the single most rewarding task to date has been raising their family, but that came with its own challenges. There was a time when Dr. Marshall was away, often weeks at a time, for work. It was so difficult for their family to be apart, and he was struggling with the weight of it all. They kept in touch on the phone and through mail, but the kids missed their father. “Jill had mailed me some pictures that the kids had drawn for me, but I was so worn down that I looked at them, crumpled them up and tossed them into the trash,” Scott said. He was praying for God to give him grace and asked for a sign that he should persevere instead of giving up. “One day, a coworker came up to me and gave me a rock. He said, ‘I thought you could give this to one of your boys,’ and then walked away. What I saw on that rock startled me. It was the same image from my son’s drawing. I went back to where I was staying and fished it out of the bin. It was called ‘Pirate Ship,’ but all I could see was the same shape etched into stone. This was how God let me know that I needed to keep pressing on. It’s amazing, you know. I had a decent prayer life at the time, but I was asking for a big sign, and this little rock changed me.”

Jill said, “We have six children, and it was so hard to trust God during those difficult years. It’s so difficult to raise kids in this culture when everything is trying to tear them down, but you get through it. When the Bible says you’ll see fruitfulness by your children, it’s true. I see it with each grandbaby. We got to witness our two oldest girls bringing their babies to the Church in baptism together. They walked down the aisle of church, prayed the Magnificat and received the Mother’s blessing and, in that moment, my heart overflowed with joy. It was all worth every struggle, every sleepless night and every sacrifice.” The Marshalls live a life overflowing with joy and love for God. They are able to help others see God’s hand in their lives through leading by example. Each time they were faced with a big decision, they allowed the Holy Spirit to guide them, no matter how daunting.