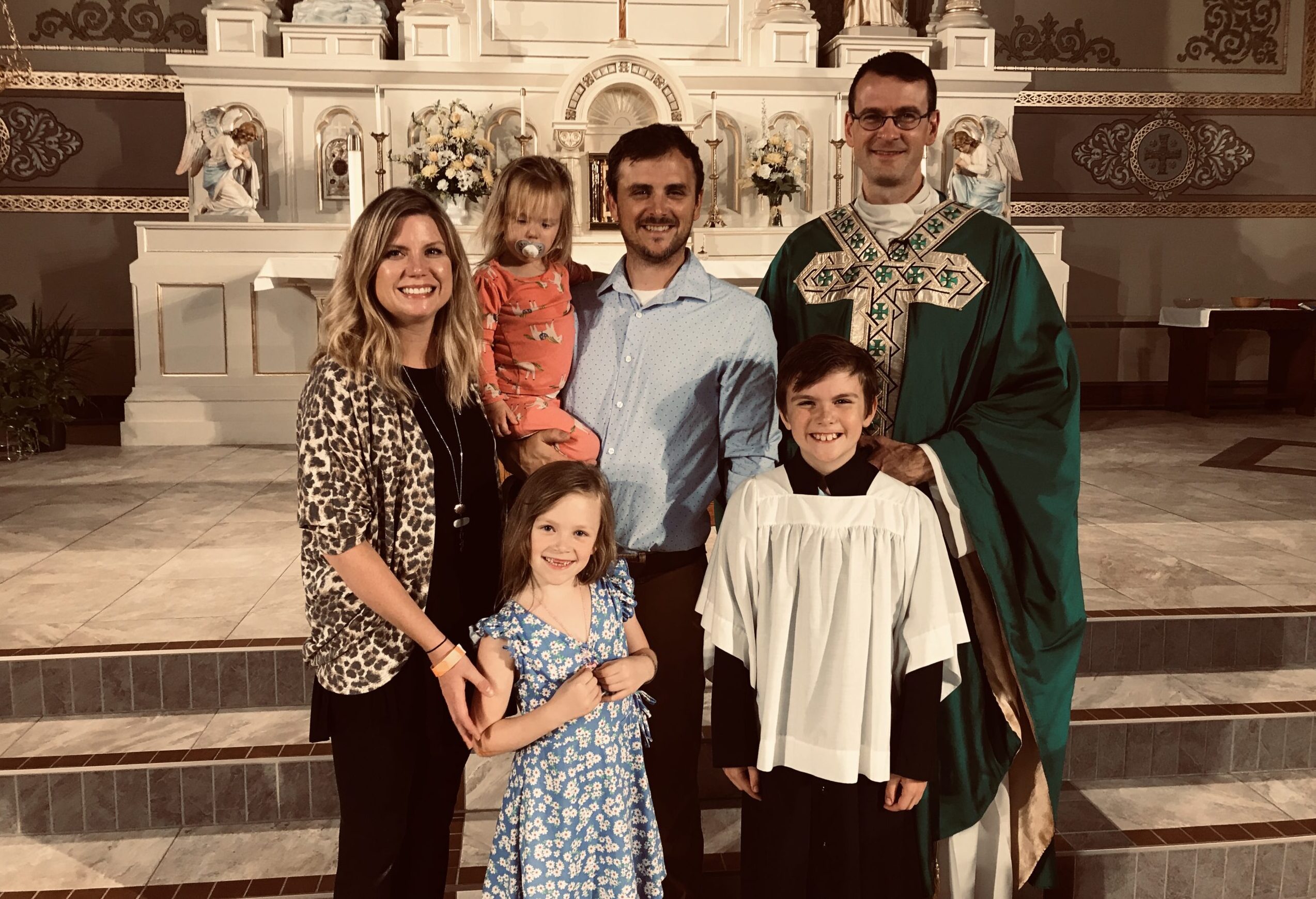 If we look closely, our story is made up of a series of moments and experiences threaded together by our trust in and adherence to God’s will in our lives. Dan and Jill Wollmer of Notre Dame Parish in Chippewa Falls can follow their story back through these moments—both large and small—to see it unfold and bring them from Protestant traditions into the Catholic Faith.

While Jill was finishing her degree at UW–STOUT, she decided to create an online dating profile for herself, trying what was, at the time, a very novel dating approach. She was matched with a guy named Dan. After a bit of chatting back and forth, the strangers planned to meet for lunch at a local café. The lunch date went so well that “[we] have been together nearly every day since,” Dan says. Jill even joked to her roommate before the date that she hoped this Dan guy showed up in a Jeep Wrangler. Perhaps a sign from God, Dan drove a Jeep Wrangler at the time and, indeed, showed up to the date driving it.

We love our priests. Notre Dame has been blessed with great priests since we have arrived here.”  -Dan and Jill

On Valentine’s Day 2009, Dan proposed to Jill near the altar of their Lutheran church where they began marriage preparation classes. It started as a whisper, but “during those classes we realized that many of the answers we were seeking about God and Faith couldn’t be answered within the Protestant community. We realized that these, and other serious questions, should have solid, consistent answers that are rooted in tradition and Scripture. As a result, we began praying and searching for a faith community with the answers to our questions. This search took place over a period of months,” Dan shares.

Dan and Jill began to try out various churches in Chippewa Falls where they planned to settle. The couple’s hearts were open to the Lord’s prompting during their search, and slowly He began revealing His path for them.

In August of 2009, Dan and Jill checked out the Catechism of the Catholic Church from the public library. In paging through the book, they learned that the Catholic Church had positions on nearly every important issue, as well as answers about angels, heaven, hell, evil, etc. “[All of the answers] had roots in tradition and Scripture,” the couple explains. “[They] seemed to us to be authoritative in a way that was not found anywhere else.” This led the couple to explore Catholicism further.

As the Catechism became due back at the library, Dan and Jill decided to take an evening walk to return it. As they walked, they talked about their Faith. They were both so engrossed in the conversation that they walked right past the library, through downtown and straight across town where the Church of Notre Dame is located. “We were in awe of the church building and walked around the grounds admiring it,” they share.

When they approached the front of the church, they heard someone call out, “Dan?” It happened to be Dan Thelen (now Father Dan Thelen). He had been praying in front of the church at the grotto when he noticed them. Dan Wollmer knew Dan Thelen as the courier who would stop at his office to pick up packages. Dan Thelen had recently told his customers he would be leaving his courier job to study to become a priest. Dan Wollmer respected the decision and was intrigued. He had gifted Dan Thelen an antique prayer book the last time he had come into his office.

Dan Thelen asked what they were doing in front of the church, to which they didn’t really have an explanation other than they had just shown up and thought it was stunning. Dan Thelen explained to Dan and Jill that he was staying at the rectory as he prepared for seminary and he had the keys to the church and could show them around. They marveled at the beauty of the interior.

Realizing he still had the Catechism in his pocket, Dan Wollmer pulled it out and explained to Dan Thelen that he and Jill were in search of a church that had answers to the questions they were asking. At that, Dan Thelen told them that RCIA would be starting soon and that he could sign them up. The Wollmers consider themselves Father Dan Thelen’s first converts and continue to stay in touch with him.

Attending RCIA, Dan and Jill received catechesis from respected teachers, Dean Arbs and Dori Loomis, and met a now close friend, Bob Krause. Bob became the couple’s sponsor and is considered family in their home. He is also a spiritual advisor to them and godparent to two of their children. Bob stood behind the couple as they became Catholic on Easter in 2010.

Dan and Jill were married in September 2009. Immediately their marriage and Faith faced a big challenge as Dan realized that something was wrong with his health when he felt “off” on his wedding day. Testing over the next several weeks revealed that he had a rare adrenal cancer. Surgery was scheduled for November. Dan’s prognosis was not great, so the couple decided on a whim to honeymoon in Italy, backpacking around from place to place.

“We spent a brief time in Venice and Pompei,” they share. “We then decided to go to Assisi, having no idea exactly what was there or what to expect.” They encountered a priest on their walk from the train station up to the old city. Not knowing if there was lodging ahead or if the priest spoke English, they hesitantly inquired. He turned out to be an American priest from Scranton, Penn., and graciously instructed them to go up the hill and ask for lodging at the Swedish Sisters of St. Bridgette Convent, and that he would check in with them later that night. “We could not believe it, everything felt meant to be. We got to the convent and stayed there for many days. The man in the robe was Father Jim Rafferty who was on vacation from the North America Seminary in Rome. Father Rafferty spent his whole vacation, every day of it, taking us around to the sites, showing us the life of St. Francis and St. Claire.”

When Father Rafferty learned of Dan’s health prognosis, he asked to perform a healing Mass for him in the underground tomb of St. Francis the next morning before he left for Rome. The Wollmers, of course, graciously agreed. They met him at the tomb the following morning where a young, non-English-speaking couple was there to join them.

Following the Mass, Father Rafferty offered Dan the anointing of the sick, at which time Jill placed her hand on Dan’s shoulder. The other couple did as well, “as if they were there for that reason,” Dan recalls. “Jill felt a strong heat run up her arm [from Dan’s body] and immediately began to cry. She thought for sure it was a miracle,” a sign of the cure they were praying for.

Dan had surgery and radiation, as planned, in late 2009 and is still cancer-free after twelve years. The couple continues to have a strong devotion to St. Francis.

The Wollmers have grown their family to include a son Peter (10) and daughters Hattie (7) and Hannah (2). As a family, they enjoy vacations to Lake Superior, relaxing and searching for rocks on the beach. Dan and Pete spend time together hunting and fishing, and Jill and her girls bond over their love of animals.

The family has felt blessed in their Faith journey at their parish of Notre Dame, the mother parish of the Chippewa Valley. “We love our priests,” they say. “Notre Dame has been blessed with great priests since we have arrived here. Notably, Father Jesse Burish is a strong, holy leader of our parish.” The Wollmers consider Father Burish a dear friend who happens to be acquainted with Father Rafferty from Scranton!

The Wollmers have been active in their church community in various ways over the years. Jill has taught CCD, Dan ushers and Pete is an altar server. The family has attended the “Epic” program, gathering with other families of the parish. They also proudly send their children to McDonnell Area Catholic Schools, which helps them share the Catholic Faith they sought, found and have come to cherish.