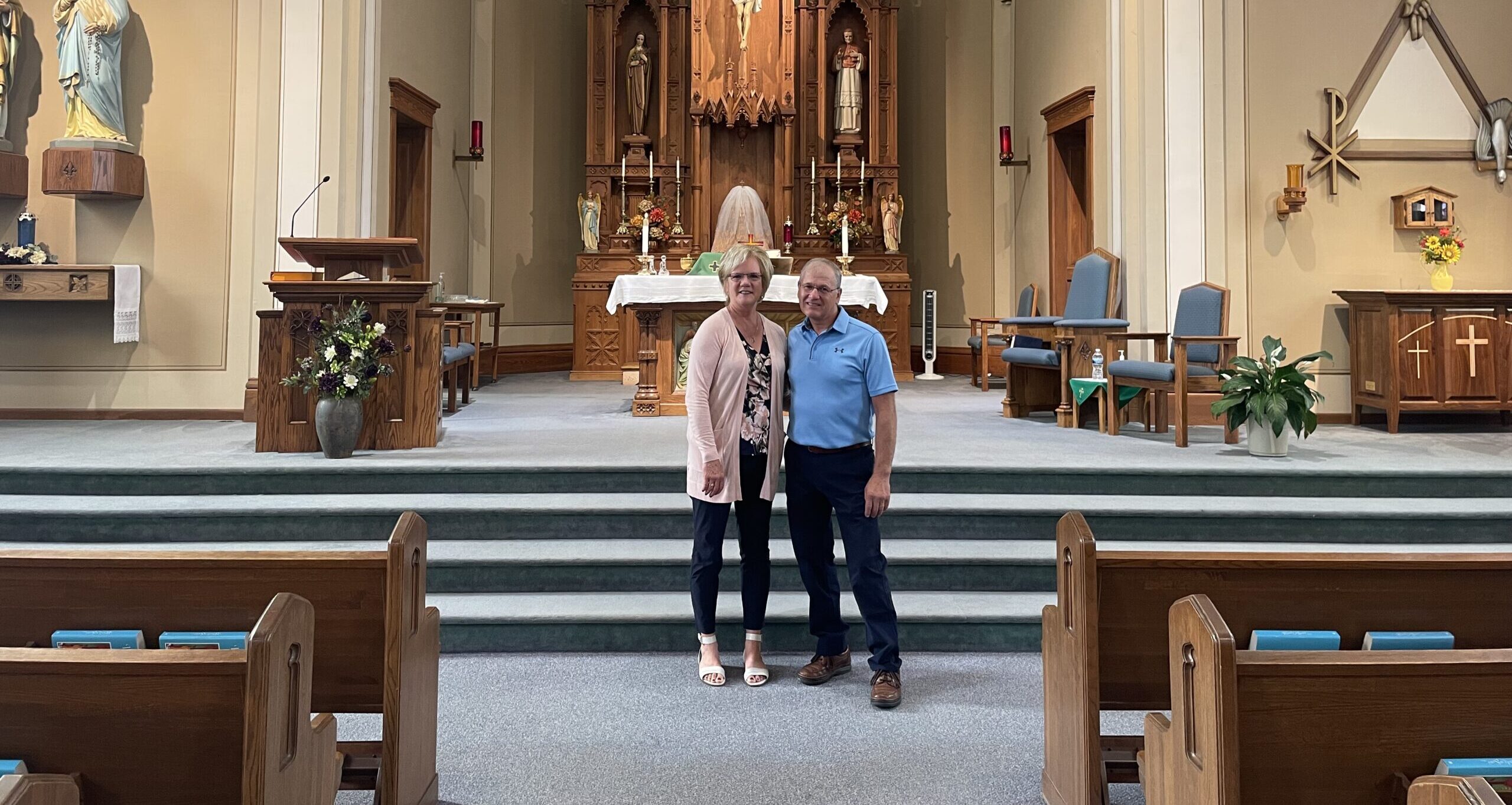 Strung along the ridges and valleys of State Highway 33, like pearls on a string, are many small, rural towns. These communities have been preserved by the families who lived there and cared for them for decades. St. Joseph Ridge, home of St. Joseph Parish, is no exception. The first church, built in 1866, burned and was replaced by what is now present in 1901. This parish has a long history of being supported by the community and Steve and Sally Miller are a testament to that dedication.

Both grew up within miles of their parish. “Every time I started doing something new for church,” said Sally, “it was because someone had asked me to. I guess it’s like taking the lead of your elders.” This community has been caring for their church since its dedication. “It’s like Steve’s dad always said, ‘You always take care of your church and its buildings because you think of your ancestors before you and how hard they worked to make sure you had this opportunity to worship here.’” Both Steve and Sally were raised in Catholic families and saw their parents’ example of involvement in the church. Recalling her childhood, Sally said, “It’s just part of who we were. Everyone knows that if the church needed something, we’d be there to help out and take care of it. ‘Course it helped that Father Bob [Monsignor Robert Hundt] was always around and we just grew up with priests all around us, so when they needed help, it wasn’t a second thought.” The two grew, through their marriage, into serving their church together.

“It’s our church and we should take care of it.” -Steve

Her first “yes” to the church was shortly after they were married. She was asked to be a “circle leader” for their women’s ministry. “We had three babies at the time, plus we were farming, but managed,” Sally recalled. “I was so busy, but so was everyone else and you can always make time for what’s important to you.” Steve’s family told stories of when the church was heated with wood and the farmers in the area took turns staying up all night to keep the church warm. Watching the volunteerism of their family and friends gave them the needed inspiration. For years, both Steve and Sally have said “yes” to what was asked of them. “It’s our church and we should take care of it,” Steve said.

When Sally was asked to be a lector, she was afraid. A fear of speaking before large groups made the request for her to read at Mass seem daunting. “You know, Lorraine Gay asked me to read for Mass and I was nervous, but Lorraine said ‘I’ll sit in the front pew and you just look at me and you’ll do OK’ and so I said yes.” With a little push and some reassurance, reading at Mass became easy and is something Sally still does for her church.

Both Sally and Steve have strong devotions to the Blessed Virgin Mary, and have been able to gather strength from the example of her “fiat” along with the others who came before them. Sally recalled a distinct memory that began her own devotion to Mary. “It was when I was young and my grandma told me this story. She had already lost one of her sons in a farming accident and, when my dad and his brothers were crossing the highway in front of church to go to school, one of his brothers was hit by a car. Grandma went into the church and knelt in front of the statue of Our Lady with the Holy Family and said ‘God, if this is Your will, then let it be done.’” Sally’s uncle succumbed to his injuries and passed away that same day. Sally’s grandmother’s example of surrender to God’s will left a lasting impact on her and set her up to say “yes” to her church whenever she was needed.

Walking into the church, the two feel at home. “We grew into serving the church together,” Sally said. “We got married so young, but the one constant was our church.” Steve said, “If it’s your church, you just do it.” Between the two of them and their families, they have been serving this parish for almost 100 years. “It’s the only church our families have known. It’s a lifelong commitment to our church,” Sally reflected. “I think when you’re from a smaller rural parish, it’s easier for us to serve because our families have been here for years and years. It’s easier when you think of all the families who have cared for it before you; it’s just your turn. Eventually, it will be your kids’ turn and then theirs. If your Faith means something to you, the building means something to you because it’s your spiritual home, so you take care of it.”

Sally and Steve are one of many families who tirelessly serve their church. Recently, Sally stepped up to serve as a sacristan. She was passed a journal of instructions from her predecessor, Rita Weber, and takes pride in keeping these traditions alive. The couple also helps decorate their church for various seasons. Sally said, “It just gives you a sense of peace when you walk in and you can feel the presence of God covering you in His love.”