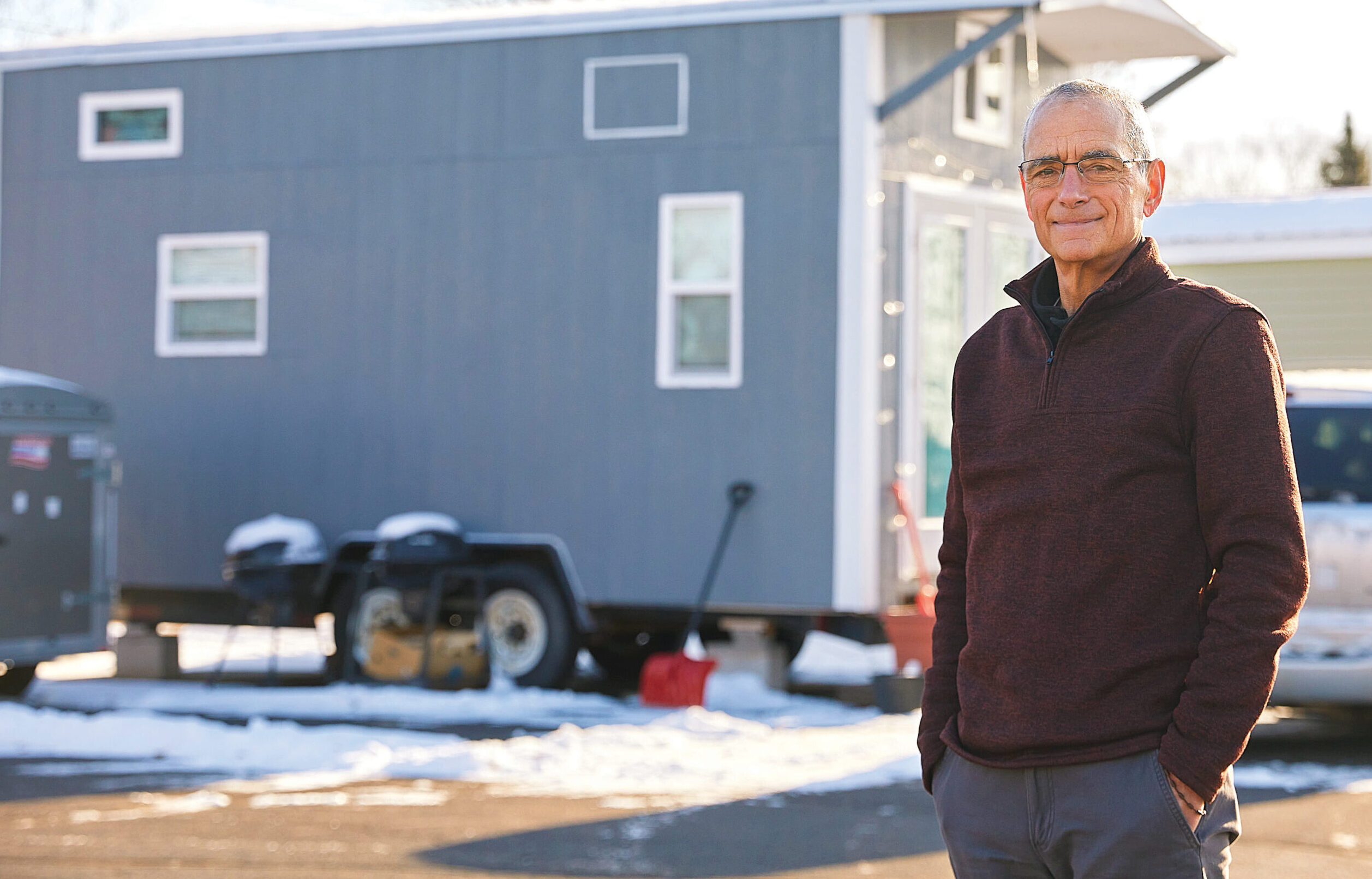 Mark was transformed when he let God back into his life

When Mark Birrittella decided to take advantage of an early retirement opportunity five years ago at the age of 61, he never could have predicted the unexpected journey ahead of him. “I was perfectly happy in my retirement. I was not looking for anything that was ‘missing’ in my life,” Mark says. “In hindsight, I think God was at work.” Mark hadn’t been a practicing Catholic for nearly five decades, but he was on the precipice of a life-changing conversion.

Mark grew up in a Catholic family of seven boys in Tarrytown, N.Y. “We all attended parochial school and were altar boys. My mother was very active at our school and in the church,” he remembers. Mark attended public high school and quickly started to fall away from his Faith. “My last confession was probably sometime in seventh or eighth grade,” Mark says. “By the time I was in college, I was completely away from the Church.” Mark got a master’s degree in electrical engineering, which led him to his work for Cray Research in Chippewa Falls in 1985, a career he continued until his retirement.

“I was thoroughly enjoying retirement. I spent time running eight miles a day and relearning a childhood musical instrument,” Mark says. In March of 2018, he was at a family gathering in New York when the first spark of his conversion was lit. “While talking to my cousin’s husband, Carlos, about his recent cancer diagnosis, I told him that I would pray for him. To be honest, at the time, it was just the right thing to say. I do not think I intended to pray for him,” Mark admits. “When I got back to Wisconsin, I thought to myself, ‘If you have any integrity at all, you will pray for Carlos at least once.’” That evening, Mark prayed for Carlos—the first time he had prayed for anyone in many years. “The next evening, I said to myself, ‘You cannot pray for Carlos just once.’ So, I prayed a second time. I realized that it made me feel good to pray,” Mark says. “I continued to pray for Carlos each evening. Eventually I started to pray for my family as well.”

Ten months after that first prayer for Carlos, the thought to attend Mass on Sunday popped into Mark’s head. “Outside of a few weddings and funerals, I had not been in a Catholic church since early high school,” Mark says. “For the rest of the week, I thought about how I might chicken out and not actually go when Sunday came around. It was a bit frightening to think about it.”

Mark summoned up the courage to attend Mass at Notre Dame Church that next Sunday. “The church was filled with parishioners. There was beautiful music and singing. I got goosebumps feeling the passion that surrounded me,” Mark says. “I decided I would come back a second time the following Sunday. I thoroughly enjoyed it once again. It was embarrassing not being able to go to Communion and I decided to go to confession so that I could receive.”

Mark says he spent about a week reviewing his life to prepare for reconciliation. On Jan. 23, 2019, Mark confessed his sins for the first time in more than 50 years. “As I left the confessional, waves of relief were pulsating through my body,” Mark remembers. “I thanked God for giving me the courage to go through with all of this.”

“Outside of a few weddings and funerals, I had not been in a Catholic church since early high school.”

Mark emphasizes there was no “lightning bolt moment” that led to his conversion. “It took 10 months of praying to soften my previously hardened heart to the point I was ready to go back to the Church and the sacraments,” Mark admits. “Once back, it was just the beginning of a slow and methodical metamorphosis in my life that continues to this day. My reawakened Faith allowed me to start to capture God’s love and graces again which slowly changed my life for the better in a process that continues to this day.”

Mark began to attend daily Mass, where he got to know his fellow parishioners. “One day after Mass, one of the more spiritual ladies at the parish introduced herself and asked me if I was new in town. I said, ‘No, I have lived here for many years. I am just recently back to practicing my Faith,’” Mark recalls. “She stopped walking and looked straight at me and said, ‘Somebody must be praying for you!’ I immediately thought of my mother. Up until that point, I had not really thought about the possibility that my mother played a role in my conversion. On the way home, I had tears of joy in my eyes and I asked Jesus to please make sure that my mother knows that I am back at the Church.”

Mark soon became involved in various parish ministries and volunteer opportunities. “I quickly decided (God’s grace at work) that I would just say yes to anything that was offered to me. I did not know it at the time, but I have since come to believe that this was how Jesus was asking me to get involved,” Mark says. “I also decided I wanted to focus on social justice ministries. It would be my way of giving back after a successful career allowed me to retire comfortably.”

One project that interested Mark was a local homeless shelter program called Hope Village, which provides temporary tiny housing for homeless people. Area churches host tiny homes on their property and provide ongoing support to the inhabitants. “Several tiny homes were placed in the parking lots of various Christian churches in Chippewa Falls,” says Mark, “but not at any of the three Catholic churches. I was immediately inspired to work toward getting at least one, if not more, at our Catholic churches. This started me on a one-year journey to get approval to place a house (on wheels) at Notre Dame Church and then to have it built.”

After receiving the needed approvals from the parish councils, the diocese and the City Council, the tiny house project began. “Father Burish gave full support once I was able to provide him with all the necessary details on how things would work,” Mark says. “Hope Village bought a used house that we were able to refurbish.”

The house was in rough condition. It had a small potbelly stove for heat and the insulation was not sufficient to stand up to cold Wisconsin winters. Over the course of many months, a team of volunteers installed double-pane windows, insulation, a furnace and air conditioning, new flooring and new wiring. A bathroom was built, lofts were adjusted to provide better sleeping space, kitchen appliances were added and the entire house was given a fresh coat of paint. Finally, in February of 2020, the refurbishment was complete. “After a year of hard work, our tiny house was ready to shelter our first homeless family,” Mark says. “A family of five (mom and four children) moved in during the evening of March 13, just days before the pandemic shutdown began. The family’s first full day in the house turned out to be my mother’s birthday! I took this as a sign from Jesus that my mother was indeed aware of my return to the Faith as I had asked of Him.”

Mark has experienced many positive changes in his life the past few years, including marrying his wife, Pam, on Sept. 25. They first met at a Bible study class at the St. Anthony Spirituality Center in Marathon in the fall of 2019. “We carpooled together each month and quickly became good friends,” Mark says. “There is no doubt in our minds that the Holy Spirit was at work from the first moment we met at St. Anthony’s.”

Mark is grateful for the conversion that brought him back to his Catholic roots. “Looking back on my life, I feel like I never lost my Faith. I just completely ignored it and forgot about it for many years. It was like a very small pilot light burning but barely so. It was waiting for fuel to reignite the fire within me,” Mark shares. “Praying for Carlos slowly allowed me to capture God’s graces and the fire finally had a small amount of fuel to burn. Once it got going, there was no stopping it. The fire allowed more grace to be captured which provided more fuel in a positive feedback loop that continues to this day.”

Mark believes God’s unconditional love and grace is always shining down on everyone, but it is up to the individual to capture it and allow it to transform them. “Faith is like a sail on a boat used to capture God’s love and grace,” he says. “If you have weak Faith, your sail is very small. If you have strong Faith, your sail is large and God can steer your life wherever He wants to take you. Pray to have stronger Faith.”