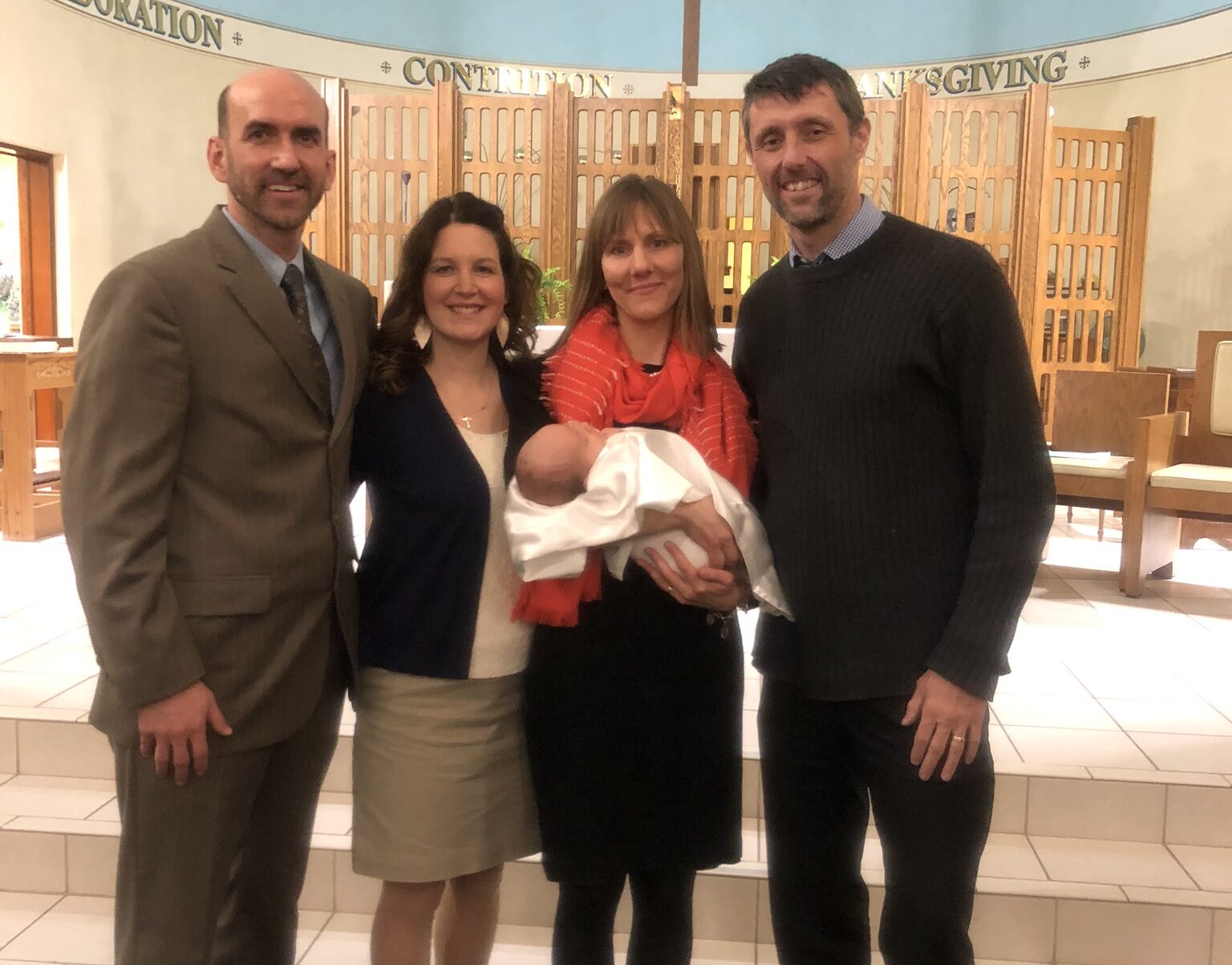 Bobbi and Nick strive to share the Good News with everyone

Growing up in Menomonie, it was a desire of Bobbi’s heart to marry and raise a family who went to church together each Sunday. An only child, raised by her mother, her faith experience consisted of a lot of searching within different denominations and little consistency or involvement in a church community. Bobbi was baptized Lutheran, but by the time she was a young adult, she admits, “I felt very lost as to what church was the ‘true church.’” She always felt that something was missing in her life.

While living in Black River Falls and working as a social worker, Bobbi was set up on a blind date with a medical student named Nick. The date involved dinner and a hike at Levis Mound to see the full moon. It turned into quite the memorable evening when they got lost before being providentially assisted by a youth group who gave them a ride back to their car.

“I was unsure if she would call me back,” Nick admits. “However, I had to hold her hand as a necessity on that first date, which I think helped me get that second date.”

“That first date was the start of many adventures and hikes together,” Bobbi recalls. “Our relationship started long distance—me in Black River Falls and Nick in Milwaukee.”

Nick grew up in Black River Falls in a loving and active Catholic family. Sundays were reserved for Mass and family time. Together the Kitowskis would swim, bike, hike, ski, sled, skate and enjoy anything active. As Bobbi got to know Nick’s family, she shares: “I could see within his family the strength they had as a family who prayed together, who went to church together and lived out their Faith in very tangible ways.” Seeing their example, she could finally begin to envision her future.

Nick and Bobbi were married on a beautiful fall day, Oct. 13, 2007, at St. Raymond of Peñafort Catholic Church in Fall Creek. They settled in La Crosse for Nick’s surgical residency at Gundersen Lutheran. Bobbi became a social worker for La Crosse County.

We both have a desire to put God in the center of our lives, our marriage and our children and to know what the Catholic teachings are and why.

Living in La Crosse and newly married, Bobbi decided to make the Catholic Faith her own. She and Nick began RCIA classes together at Blessed Sacrament Parish, which was a fond and fruitful experience. Even though Nick grew up in the Faith, he learned so much. “We had a wonderful teacher, Jennifer Kulzer, and a great group of people in our class,” Bobbi recalls. “It was a great starting point of learning about our Faith. We continue to build on this every day.”

The early days of marriage and becoming Catholic were busy for the Kitowskis. They sought to be of service to those in need. Bobbi became involved with Big Brothers, Big Sisters. And Nick, alongside his surgical training, connected with a medical mission group, with whom he and Bobbi traveled to the Dominican Republic to provide aid.

After Nick’s residency ended, the Kitowskis decided to move back to Nick’s hometown of Black River Falls. There, he is a general surgeon at the Krohn Clinic-Black River Memorial Hospital, as well as Tri-County Hospital in Whitehall.

Bobbi is a stay-at-home mom to the couple’s four children: Audrey (11), Bryce (9), Emma (7) and Alex (3). “I think having children has really deepened our Catholic Faith and our desires to know our Faith better,” Bobbi explains. “We are able to learn right alongside our children.”

“We both have a desire to put God in the center of our lives, our marriage and our children and to know what the Catholic teachings are and why,” she continues. “And our marriage has been strengthened because of it. We encourage each other to grow in our Faith.”

Along with their four beautiful children, the Kitowskis have experienced the loss of three more. “We have come to trust in God’s plan for our family and have embraced the Church’s teaching on being open to life,” Bobbi shares. “For us, being open to life has meant that we have opened our hearts to more blessings in our life but on the other hand it has opened our hearts to be vulnerable to heartache and loss.” For Bobbi, her three miscarriages have brought her closer to our Blessed Mother.

“Shortly after our third miscarriage, we went to the Shrine of our Lady of Guadalupe and visited the Memorial to the Unborn. I took notice of Our Lady of Guadalupe holding three babies in her arms. I was never conscious of just how many babies she was holding until that day and that visit. I look to her as if she was holding my three babies in heaven,” Bobbi recalls. The Kitowskis now have their babies’ names engraved on the wall of the Memorial to the Unborn.

Together, the Kitowski family enjoys many of the same active pursuits as Nick’s family did growing up. Bobbi and Nick love spiritual reading. They credit this hobby with strengthening and helping them become more active in their Faith. “It is kind of a running joke with our family on how many books we have on our Catholic Faith,” Bobbi laughs. “On any given week, there are books arriving at our house.”

The Kitowskis are parishioners at Guardian Angels Parish in Black River Falls. And as their family has grown, they have sought ways to become more involved at their parish. They’ve had their hands in just about everything, from helping with marriage prep, festivals and church events, to three of their children serving Mass each weekend. Nick is a member of the Knights of Columbus and Bobbi, the PCCW. Both help teach in the CCD program.

The past couple of years, the Kitowskis have experienced a great deepening of their Faith by incorporating family prayer with the rosary and setting aside time for the family to go to confession together. Bobbi has also incorporated liturgical living into their daily lives by celebrating the saints’ feasts, baptism anniversaries and solemnities to enrich the family culture. She and the children commit to acts of service—supporting new moms, their area pregnancy center and delivering groceries to people who are homebound. In 2015, Bobbi started and coordinated a local chapter of MOPS (Moms of Preschoolers) for several years. Her current project is starting a foster care closet for the area. Nick’s Faith propelled him to lead a group of men through the rigorous Exodus 90 program this past Lent, which he continues to be involved with. He continued the men’s group camaraderie with a Bible study and book club. Looking back at his journey, Nick shares: “I grew up for most of my life as a lukewarm Catholic. I went through the motions and attended Mass, but did not have the full understanding of the Faith. I have recently in my life become on fire for my Catholic Faith. I have come to understand the truths of the Church and my eyes have been opened to all the blessings that the Catholic Faith brings to myself and our family. It has made my marriage, family and my relationship with God stronger. I have gained interest in learning how to defend my Faith and the history of the Catholic Church and I have a passion to share this amazing Faith with those who will listen.”