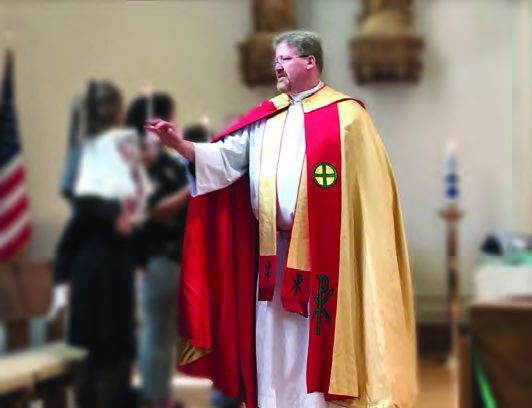 NOTE: The mother’s name has been changed for privacy.

“Blessed is she who believed that there would be a fulfillment of what was spoken to her by the Lord.” (Lk 1:45) This proclamation by Elizabeth to the Virgin Mary prompted Mary’s Magnificat. Mary, pregnant, unmarried and surely feeling alone, stayed with Elizabeth in the Judean hill country for three months and then returned home. It was this joyful mystery of the Visitation that inspired the idea for a refuge for women and children called The Elizabeth House in Sparta.

Brook White, a young nurse from the area, was reflecting in prayer one day when God asked her very clearly to begin The Elizabeth House. She took much more time for prayer, reflection and research and, shortly afterward, purchased the home that would become The Elizabeth House. Inspired by the idea that Mary had turned to her cousin, Elizabeth, for a soft place to land, Brook decided the house should be named in her honor. Growing up, Brook’s parents were foster parents to many children, in addition to raising their six biological children, so the idea of welcoming strangers and their children into her home was not foreign.

Looking back, there are so many times I can see where God took over. He made it happen. – Brook

After setting things in motion, Brook welcomed her first mother in 2019 and a second in 2020. Currently, only one mother and her children can live in The Elizabeth House at a time, partly due to space and partly due to the mentorship accompanied with the refuge there. Brook’s goal in opening this space was not to simply give these women a safe place to rest their heads, but to help them regain control and ownership of their own lives. After moving into The Elizabeth House, these mothers meet weekly with Brook to outline plans and goals for themselves and their families.

The most recent family to stay with Brook was a young mother and her three small children. They have a remarkable story of resilience and, with the help of The Elizabeth House, this young mother was able to start over. Mary, 21, [name changed for privacy] called The Elizabeth House in May 2020. She was pregnant and had two children, a 3-year-old daughter and a 1-year-old son. The call to Brook took place while the small family was living in a hotel after having left an unsafe situation; Mary was in dire need of somewhere to go. The Elizabeth House was the place for her. Mary was ready to take charge of her life and get back on track, and all she needed was a safe home-base to make that happen. It was one week from the initial phone call to Brook to the time they moved into The Elizabeth House.

After moving in and getting settled, Brook and Mary had weekly meetings to set goals. Mary’s goal for moving out of the home was nine months, and she moved out just shy of one year. Her goals included getting a G.E.D., a driver’s license, a job and a vehicle, all within her time at The Elizabeth House. “She worked her tail off!” Brook said. “In the midst of raising two kids with one on the way and no support, she did it all! She is so inspiring!” The home operates as a family setting, complete with family dinners in the evenings.

From the time that Mary moved into The Elizabeth House, she was able to secure a part-time job, child care and her G.E.D. all before delivering her baby. Mary welcomed a new little girl in August 2020. A week or so after her youngest was born, Mary developed an infection and collapsed in a parking lot. Thankfully, Brook was with her. Putting Mary and the other kids into the car, Brook raced to the hospital. Brook’s mom was able to come watch the two younger ones and eventually Mary would heal. “It was a totally crazy time, but awesome that God was able to be with us through it,” Brook recalled. With Brook’s help, she was able to enjoy a six-week maternity leave from her job for the first time. Many women in her situation, without a strong support system, are unable to take the maternity leave afforded to them, so this was a huge blessing for Mary. “Looking back,” Brook said, “There are so many times I can see where God took over. He made it happen.”

After crushing a new goal of getting her driver’s license and a car, Mary was in an accident and totaled her car. Thankfully, the kids were not with her, but nonetheless, she now needed a new car. The community around Mary rallied and gifted her with new car seats and a sum to put toward a new car. “It’s incredible to see how everyone else pulled out the stops to help her,” Brook said. “She was in tears and so grateful. She had never had anyone willing to help her like that.” After things calmed down, as much as they could with three kids and working, Mary and Brook started looking for housing of her own. “This is where I needed a boost in my Faith,” said Brook. “We were both looking for new housing and nothing was in her budget. Reality hit, and then we found a place.” The housing was unattainable at first, but once again, her new community rallied around her, pulled some strings and Mary was able to move into her own apartment.

“Her Faith journey has been beautiful,” said Brook. “Things are obviously still hard, but she’s really leaned into God as her strength.” Mary and her three children were welcomed into the Church at the Easter Vigil Mass in April 2021.

Brook acknowledges that her family situation is a privilege. She has two parents who raised her and a big extended family, all who love and support one another. Her vision for The Elizabeth House was simply to take the privilege afforded to her, and extend it to others. “For her to meet my whole family and become a part of it, has been a gift for all of us,” Brook said. “She and her crazy, awesome, kids bring so much joy to me and my family.” The supportive environment and help that comes from being raised in a close-knit family is not something everyone has and Brook hopes to serve as that for more women in the future. “It’s not like growing up, I had experts in everything to help me,” said Brook. “I just had supportive people who loved me and I hope to be that for someone else.”