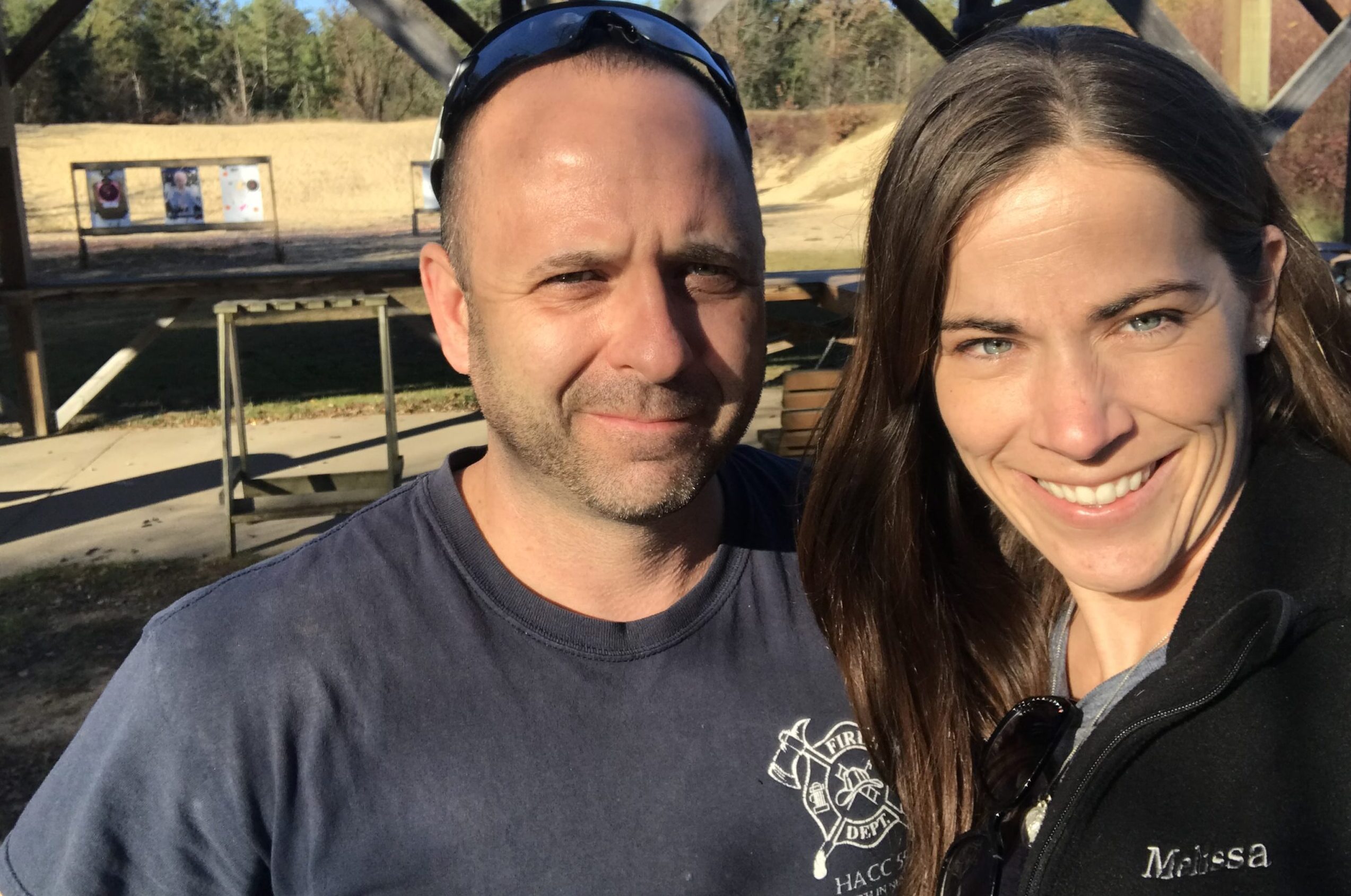 “Holiness is not for wimps and the cross is not negotiable, sweetheart, it’s a requirement.” –Mother Angelica

Melissa Cochran of All Saints Parish in Stanley has been on a lifelong journey of discovery, experiencing her fair share of both suffering and joy along the way. Following her beloved Mother Angelica’s prompting, she is learning to pick up her cross and strive each day for holiness.

Melissa grew up in and around Chippewa Falls on a hobby farm, the only child of parents who were told they couldn’t have kids. “I was spoiled,” she jokes. “Both my parents wanted a houseful of kids, but all they got was me.” Melissa has fond memories of family bike rides, 4-H and playing catch in the backyard. Her dad taught her to shoot and drive a tractor, and her mom made sure she was versed in sewing and painting.

When Melissa was in high school, she had her first experience with suffering as she watched her grandfather endure colon cancer. It spread through his body and eventually took his life. “I became very angry with God,” Melissa explains. “I could not understand why God allowed such suffering in our Catholic family. I [began] giving Him the cold shoulder because I was mad. He hurt me and I wanted to hurt Him.”

The chaplains at McDonell High School—first Father Eric Berns and later Father Brian Jazdzewski—became a needed source of guidance and encouragement to her, helping her heal her anger toward God. Another high school experience that helped Melissa understand how joy can exist in the midst of suffering was a mission trip to Casa Hogar in Peru. “The kids, Father Joe Walijewski, everyone, while they had very little, were always smiling. To this day, their smiles are burned into my memory,” she recalls.

After high school, Melissa attended college at the University of Wisconsin-River Falls. “I was a good kid, but I had a hard time fitting in,” she admits. Thankfully, she brought her cherished horse along, boarding her nearby and riding as much as possible. During college, Melissa was no longer mad at God and even longed for a deeper relationship with Him. But she didn’t know quite how to go about it.

After graduating from college with an animal science degree, Father Jazdzewski asked Melissa to consider holding off her job search. He suggested taking on a different adventure, namely, Trinity Teen Solutions, a rural facility in Wyoming that removes at-risk teenage girls from their environments and works to heal them mind, body and soul. Melissa was hesitant to accept the job, but ultimately felt called to make the trip and began her work as a counselor. For her eight-month stay, Melissa found much healing as she and the girls grieved their struggles, prayed and celebrated their successes together. She witnessed great spiritual and emotional suffering but also God’s grace working through it all. During her time there, Melissa was introduced to Latin responses at Mass and benediction, as well as the Liturgy of the Hours, which she continues to pray at least an hour each day.

After a few months back at home, Melissa accepted a position as an animal health inspector with the Wisconsin Department of Agriculture. In 2017, she was promoted to supervisor for Northern Wisconsin. “I always wanted to marry a farmer and farm full time,” Melissa laughs. “In God’s humor, He united me with a dairy farmer who left farming to move to Wisconsin to be with me, so this job and our hobby farm allow me to participate in the agricultural industry that I love so much.”

Melissa met her husband, Nate, while attending Mass at her parish in 2007. She was introduced to him by Father Jazdzewski while Nate was visiting from his family farm in Pennsylvania. Seven months later, as they met outside Goldsmith Adoration Chapel for a date, Nate proposed. The following year they married.

Leading up to her wedding day, Melissa wanted to slim down and began obsessively counting calories. She developed anorexia and, even after the wedding, continued to lose weight. Struggling with her body image, depression soon followed. “During a time that should have been our honeymoon phase,” Melissa recalls, “Nate put on the armor of God and went to battle carrying our marriage and me. He never gave up on me.”

Melissa knew things needed to change, and she did get the help she needed from a team of medical professionals and also from Father Berns, who offered her friendship and much prayer during the hard years of recovery that followed. In 2010 she and Nate welcomed baby Wyatt and, three years after, a son, Justin.

When Wyatt became school age, the Cochrans sent him to St. Joseph School in Boyd and made the difficult decision to transfer parishes, leaving the parish where Melissa grew up, where the couple met, were married and where Wyatt was baptized. They joined All Saints, the school’s parish. “I wanted to jump into the parish with both feet,” Melissa shares.

Melissa joined the Home and School Committee where she is currently the chair. She and Nate became a FOCCUS couple and were asked to lead the Marriage and Family Committee at All Saints. Melissa has recently taken on teaching sixth grade CCD, and continues to lector as she has since eighth grade. Wyatt is a frequent server and loves to participate in the liturgy.

Melissa began to read about and develop a sense of friendship with the late, sassy and wonderful Mother Angelica. “I could relate to her energy!” Melissa chuckles. This friendship led to much more reading about the saints. “Over the years, I think I’ve bought more books than groceries,” she jokes. Her spiritual reading grew to include encyclicals, works about eucharistic miracles, the liturgy and just about anything Catholic that she could get her hands on.

“In the midst of [my reading] I began to make more friends. Deep and lasting friends. I have ‘my team’ as I call them of St. Benedict, Blessed Pier Georgio, St. Monica and St. Joseph. Finally, my friends helped to prepare me to deepen my relationship with Our Lady, who I could finally call ‘mother.’” Before then, Melissa couldn’t seem to relate to the sinless Mother of God. She felt she was so opposite: sinful, willful and type A.

“St. Benedict is my bestie,” Melissa laughs. “I love his rule and I take care to follow it. I try hard to practice his role of humility, silence and obedience [and] purge all things that tempt me to anxiety and anger.”

In her journey of conversion, Melissa admits, “I never heard the booming voice of God, but I never quit working towards a deeper relationship with my Lord. It’s been a lifelong effort of surrendering to God’s will and seeking Him in all things. I have a big personality and strong will, so I am constantly trying to surrender that to God and sometimes I’m even successful! I have learned to enjoy silence and love my rides alone in the state park so I can talk to God out loud and pray a rosary or Chaplet of Divine Mercy while on my horse in God’s creation.”

Melissa also loves to be on her little ranchette with her family and animals. Together the Cochrans enjoy shooting sports, throwing tomahawks and playing football. The family makes time for daily prayer, incorporating each of their favorite devotions and ending the day with a special tradition of Melissa reading the boys Bible stories or other spiritual works. As they nod off, she always reminds them, “We love you more than anything in the world, but Jesus and Mary love you more.” Wanting to “instill in them early that even if I fail them, they have a heavenly mother and Savior to rely on always.”

Melissa’s favorite Bible passage since college (which she even had leather-punched on her riding chaps) has been Romans 12:2:  “Do not conform yourself to this age but be transformed by the renewal of your mind, that you may discern what is the will of God, what is good and pleasing and perfect.” She has learned that “drawing closer to Jesus takes a daily act of will, trust, obedience and love.”

“I find comfort in times of stress in the loving arms of the Holy Family; my mother, my spiritual Father, and my adorable little Lord. Sometimes I become frustrated with the world and wish we could carve a little world of our own in which to live.” But then, more of Mother Angelica’s words echo in Melissa’s mind. “God wants you to be in the world, but so different from the world that you will change it. Get cracking!”

“Therefore, rather than run and hide from the world, while not being of the world, I should live in the world as a light of Christ to others,” Melissa shares. “This is a tall order that I can’t do on my own. I tried. This is why I need weekly Mass, I need my eucharistic Lord, ‘my team’ and my beloved domestic Church.”