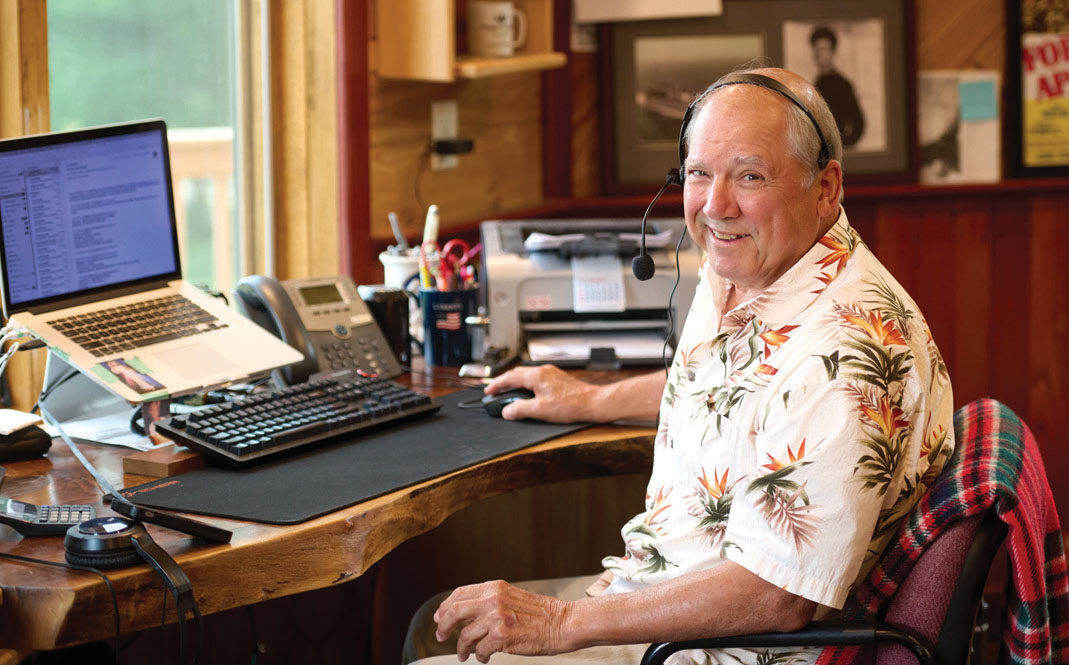 Jeff remains faithful despite his many trials

“When I look back over the years, I realize how blessed my life has been and is today. I am very fortunate and have received many blessings from the Lord … and several miracles,” says Jeff Bump, a parishioner of St. Anthony de Padua Parish in Cazenovia.

Born in Beaver Dam, Jeff was the oldest of seven children, all of whom suffered from severe asthma. “I was diagnosed when I was two and I had it bad,” Jeff remembers. “Thus began a long saga of coughing, wheezing and struggling to breathe. In the 1940s, there were no medicines for asthma and the only treatment was to be placed in an oxygen tent for weeks at a time. From the time I was two until about fourth grade, I was hospitalized 26 times, sometimes for up to three weeks.”

When Jeff was three, his family moved to Randolph, but they would return to St. Joseph’s Hospital in Beaver Dam when medical attention was needed. “St. Joseph’s played a tremendous part in my life, not only in preserving my physical life and health, but also in my spiritual life and formation,” Jeff says. “I didn’t realize the spiritual impact until years later. I have the greatest love and respect for the sisters who nursed me back to health many times.”

Frequent asthma attacks and hospitalizations took an emotional toll on young Jeff. “While other boys were learning life skills playing sports or hunting or having a dog for a pal, I couldn’t do that because I would have an asthma attack,” he says. “As a kid, I did feel sorry for myself sometimes and get angry.” Jeff remembers getting some tough love from his great-grandmother, who was instrumental in providing a strong Catholic foundation for their family. “When I was complaining she would say, ‘Oh Jeffey, just offer it up.’ I was only five or six and I never knew exactly what that meant,” he laughs. “I realized as I got older that a lot of kids had it worse than I did with polio, accidents, burns, crippled limbs. Maybe I didn’t have it so bad after all.”

Jeff says he also learned about visible signs of Faith while hospitalized. “There were many crucifixes in the hospital … on the walls, at the foot of each hospital bed, in the hallways, the nurses’ station and, of course, in the chapel. There were religious pictures and statues of Mary and the saints.” Seeing those religious symbols on display inspired Jeff to also have them in his bedroom at home. “Usually, the last things I saw when I went to bed each night was my ‘Sick Cross’ and a picture of Mary on my wall,” Jeff reminisces.

Jeff says his mother and father sacrificed a lot for their seven children. “Over the years, they stayed up at night, watching their children struggle to breathe,” he says. “Then they’d work a full day, only to do the asthma night shift again. I don’t think they ever got a full night’s sleep.” Asthma taught Jeff about suffering, pain, patience and prayer. “It’s tough when you can’t breathe for days. You beg God for a deep breath and thank Him when He gives you one, and then struggle for the next five minutes waiting for another full breath,” he explains. “I also learned about pushing myself physically to strengthen my lungs and overcome my asthma.”

Even if Jeff couldn’t do many normal childhood activities, he did find his niche elsewhere. “When I was eight, I became an acolyte at my home parish,” he says. “This was when the priest and acolytes said all the Mass prayers aloud in Latin. There are still portions of some prayers I can recite from memory in Latin.”

When Jeff was in the third grade, his best friend, Eddie, died of German measles. “I served his funeral Mass and interment at the cemetery,” Jeff remembers. “Saying goodbye to him made a big impression on me. I prayed for him often. His was my first of many funeral Masses I served as a young boy.”

Jeff began to contemplate a vocation to the priesthood, so he attended the Society of the Divine Word Minor Seminary in East Troy, Mich., his freshman and sophomore years. “Looking back, those were two of the best years of my life,” he says.

When he came home for Christmas break the first year, Jeff was in for a very pleasant surprise. “My local priest wanted me to serve Midnight Mass. Unbeknownst to me, my mother, who was Lutheran, had converted to Catholicism and she was to receive her first Communion at Midnight Mass,” he reminisces. “I was the acolyte with the paten at that Mass and had the great honor of assisting the priest in serving my mother’s first Communion.”

After two years at minor seminary, Jeff discerned he was not being called to the priesthood and returned to his hometown to complete his high school education. He began to enjoy some new experiences. “I had no problem getting a date,” he laughs. “I had motorcycles and was the lead singer in a rock and roll band. Pride—one of the seven deadly sins—was my downfall. Staying in a state of grace was a real problem for me.”

When he was 17, he had a near death experience with a miraculous ending. “I was on my motorcycle one late October night and hit a big patch of ice at 65 mph,” he says. “My bike started to fall over and I kept trying to get my balance. All I could see were my mom and dad crying over my grave. I finally got the bike upright at about 55 mph and was very scared. I knew I should have been dead that night. Thank you, God, for preserving me.”

After high school, Jeff got a job and met a divorced woman with a son. “We got engaged and my parents did much to dissuade me from marriage. As a final effort, they found a very liberal priest that agreed to marry us, to at least keep me close to the Church,” he admits. “We were married for 7 ½ years and had three wonderful children, but I knew for that entire time that I was living in a state of constant adultery.” Jeff says at one point late in their failing marriage, he found himself contemplating what to do. “In my mind, I could see a blank wall with just one small window that was partially open. As I looked at the window, I could hear the Lord saying, ‘Jeff, this open window is your way to leave this sinful situation and come back to Me, but this window will not be open for long, and I will help you.’” Jeff filed for divorce and fought for custody of his children, ages 2, 5 and 6. “I was the third father in Dodge County history to gain sole custody of his children in a court trial,” he says. “The Lord surely did help me. I believe this was a miracle.”

That marriage was annulled by the Church and two years later, Jeff married his wife, Nancy, who was his daughter’s kindergarten teacher. Over the years, Jeff and Nancy added four more children to their family. “I owe my wife so much and I love her so much,” Jeff says. “God has been very good to me.”

Through the decades, Jeff has enjoyed serving the Church in many ways, including lector, cantor, acolyte, extraordinary minister of holy Communion, sacristan and parish council president. He and Nancy also sang at many weddings and funerals. These days, he enjoys attending and serving daily Mass at St. Anthony Parish. “I strongly recommend daily attendance at Mass,” Jeff says. “I have a lot of bad habits, but daily Mass is my best habit. Guess what—my daily bad habits decreased!”

Jeff says he identifies with the prodigal son in his spiritual life. “I have always had Faith. I have not always done a good job of living it; sometimes I’ve done better and sometimes worse,” Jeff reflects. “But Christ and His Catholic Church always provide a way back. I understand that I am a sinner, but I also understand that Jesus has put into place the sacraments, especially confession and the Eucharist, and key people—priests, nuns, my parents and family—to help me when I fail. My Faith has helped me to understand that when I put myself into a state of sin, there is a way back. If I pray and search in the right places, seek grace and am granted God’s forgiveness, I can get back to where I’m supposed to be. And hopefully, each time I can be better than I was before, so that it’s harder for me to fall again.” Pausing, he adds thoughtfully, “I am very thankful that Christ established His Catholic Church because I really need it. I don’t think I could go through my life as anything else but Catholic.”