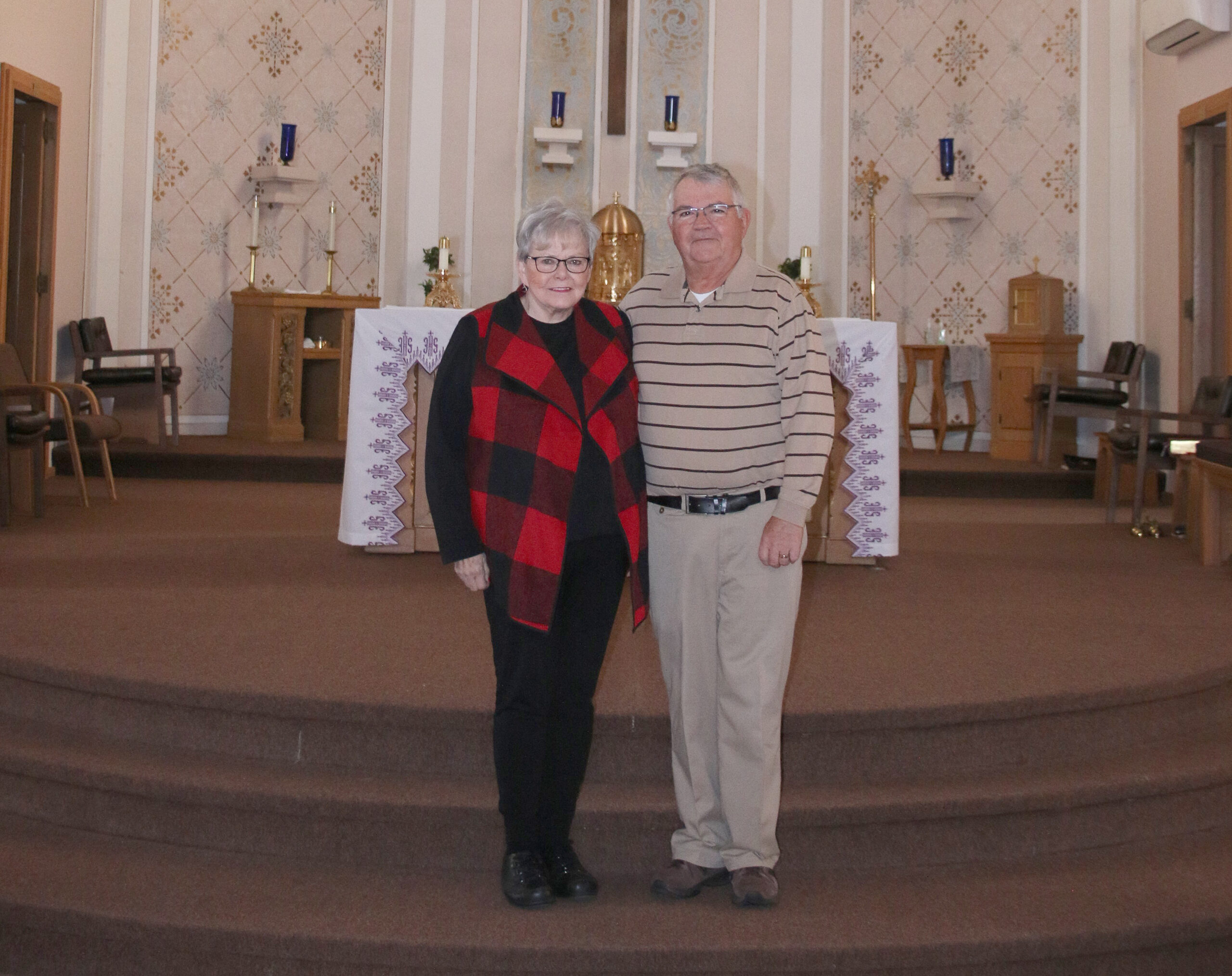 Don and Colleen’s giving spirit brings them closer to God

For decades, Colleen and Don Vinette of St. Paul Parish in Bloomer enjoyed rewarding careers that made a positive difference in the lives of others: Colleen was a registered nurse for 34 years, while Don was a teacher for 36. Their giving spirit continues to be demonstrated in their retirement through numerous volunteer activities, including being co-chairs of the St. Paul Parish thrift sale, a successful volunteer program that raised an astounding $115,000 last year.

The origins of the thrift sale date back almost 20 years. “We held our first sale in 2003 during St. Paul’s Fall Festival,” Don explains. “People brought in donations on Thursday and the sale was on Saturday and Sunday. It was held in our priest’s garage, in the driveway and out under the clothesline! What didn’t sell was put in boxes and sold at the auction on Sunday.” This first effort earned $3,800.

With that positive start, the thrift sale blossomed. “The next year, we decided to hold the sale every Friday from the middle of June until the Fall Festival,” Colleen says. “We stored donations and every Friday morning we set up 15 folding tables for the sale items. If it rained, we were in big trouble!” At the end of the day, volunteers would haul the items back into the convent and garage until the next week. The thrift sale continued to grow each year, with earnings reaching $7,000 in 2010. Five years later, the program earned an amazing $31,000.

By then, it was obvious the thrift sale had outgrown its original set-up. “We have about 20 volunteers—mainly retired folks—and it had become too much work to set up and tear down on sale days,” Colleen says. They received permission to raise funds to build a small pavilion on parish grounds to hold the weekly thrift sale. “It only took a few months to raise the money for the building,” Colleen says proudly. “Everyone was very generous. The parishioners saw all the good the thrift sale was doing not only for our parish but also the community.”

The 4,000-square-foot pavilion was built in 2016 and the thrift sale’s success quickly multiplied. “The sale earned $86,000 in 2019 and last year we made $115,000,” Don says. “The pavilion is always brimming with merchandise.” They sell items on Thursdays and Fridays from the first weekend in May through the first weekend in October, with proceeds funding various church and school needs each year. Volunteers put in many hours to make the program a success, from picking up large items like furniture, to cleaning every item before it goes on sale. “We’ve even cleared out entire estates for families,” Colleen adds.

While organizing and running the thrift sale takes work, the volunteers agree it is also fun. “It’s a great way to meet people you might not otherwise get to know,” Colleen says. “We have lots of laughs and often enjoy a potluck lunch while we’re selling. The volunteers also get the first chance to buy any ‘treasures’ before they’re put up for sale. Many of us say we can’t afford to be volunteers anymore because we spend too much money buying things!”

Colleen says the benefits of the thrift sale are threefold. “It serves people who may not be able to otherwise afford items from stores, it keeps items out of landfills and the proceeds are going to a good cause,” she explains. “It’s a win-win-win!”

In addition to the dozens of hours they spend on the thrift sale each week, the Vinettes are also involved in other volunteer activities. Don is on the board of the local food pantry, Colleen is a member of the PCCW and both are on the parish council.

While serving their church and community is important to Don and Colleen, their family is always uppermost in their hearts. “Don was an only child and he was so good with his mother,” Colleen says of her husband of 18 years. “She lived to be 94 and was in a nursing home for the last 14 years. Except for a couple of vacations, Don never missed a day to go and visit her, right up until her death in July of 2018.”

During that same month, Colleen suffered an unthinkable loss when her son, Andy, died from brain cancer. Colleen was comforted that Andy had renewed his Faith before his illness. “A few years before he was diagnosed, he told me that he wanted to be ‘strong in the Church’ like Don and I were,” she remembers. “He began to regularly attend Mass, got more involved in his parish and really grew in his Faith.” Andy was diagnosed with a rapidly growing malignant tumor and was told he only had a few months to live. “When he told me the diagnosis, I began to cry,” Colleen shares. “Then he crossed his two fingers and said, ‘God and I are like this, it’s going to be okay.’ He believed his illness was all part of God’s plan.” Andy lived 10 months, leaving behind his wife and their five children. “He continuously told me that he was so blessed and that he had a good life,” Colleen says. “He believed things happen for a reason and said he could tell I’d gotten closer to God since his diagnosis.” Colleen was grateful for Andy’s positive attitude. “He said good comes out of everything,” she shares. “His passing made my Faith even stronger. Instead of his death being a time I want to forget, it’s a time I cherish because I feel like God, Andy and I were so connected at that time.”

These days, Colleen and Don enjoy spending time with the rest of their family, which includes Colleen’s other son and daughter, nine grandchildren and seven great-grandchildren. The couple look forward to continuing to volunteer as much as possible. “It’s important to stay active and involved,” Colleen says. “You have to have something meaningful to do when you get up each morning.” She says people sometimes encourage her to slow down and enjoy her retirement. “They tell me I don’t have to take care of everyone in the world, but that’s important to me,” she says. With a chuckle, she adds, “Besides, we need to feel like we’re earning our way to heaven!”