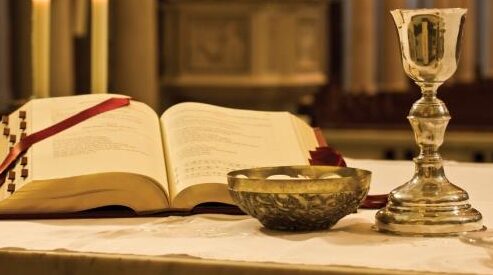 The holy Eucharist completes the action of Christian initiation. Those who have been raised to the dignity of the royal priesthood by baptism and configured more deeply into Christ by confirmation participate with the whole community in the Lord’s own sacrifice by means of the Eucharist. (CCC #1322)

In the study of our Faith, we come to know the Eucharist as the “source and summit of Christian life. The Eucharist is the efficacious sign and sublime cause of the communion in the divine life and that unity of the People of God by which the entire Church is kept in being; and by the Eucharistic celebration we already unite ourselves with the heavenly liturgy and anticipate eternal life, when God will be all in all.” (CCC #1324-1326)

As I made my way through the seminary while studying for the priesthood, I learned so much of this information and tried my best to interiorize it for a day such as this, when I would be able to share it with my brothers and sisters in the Church.

The Catechism of the Catholic Church is, next to the holy Bible, one of the most significant and important books any Catholic should read and all other people would enjoy reading! So much of our Faith is filled with wisdom and inspired knowledge that lifts our minds and hearts to the positive love of God.

In 1972, six years before my ordination to the holy priesthood, Pope Saint Paul VI made some major changes in the steps toward priestly ordination. Until that time, some of you may remember, the stages to the priesthood began with a medieval ceremony called tonsure—the cutting of the priestly candidate’s hair—a style resembling the traditional monk’s haircut. That was the official sign that one was a “cleric.” The steps that followed were associated with the spiritual and academic steps for the priesthood: porter (responsible for opening and closing the doors of the church), exorcist (responsible for praying especially for those preparing for baptism), lector (responsible for the reading of Scripture at the holy Mass), acolyte (responsible for preparing the materials needed for Mass).

Pope Saint Paul VI and his curia changed the minor orders that could be held by any and all baptized men and women to ministries. This was, indeed, a major reform in the Church brought about through the apostolic letter Ministeria Quaedam (15 August 1972) given motu proprio (Latin: “on one’s own initiative”). A document given motu proprio is a papal document personally signed by the pope to signify his special interest in the subject (in this case, the liturgy, the structure of priestly formation and the application of the stages of advancement to Orders) less formal than an apostolic constitution and carrying no papal seal. We have experienced the effects of that change right into our own day.

When this first began in the Church, many of us (who are old enough to remember) had some difficulties accepting these actions being fulfilled by members of the laity. We had been taught that these actions were only carried out by priests. The saintly pope explained some “new ideas” that had been clarified by the (recently concluded, 1962-1965) Second Vatican Council and stated in the Dogmatic Constitution on the Church (a.k.a. Lumen Gentium). While this did not completely silence the difficulty, we seem to have lived with the distinctions and their applications in the liturgy ever since.

In conclusion, ministers of the Word (lectors) and extraordinary ministers of holy Communion, Lumen Gentium teaches, “though they differ essentially and not only in degree, namely the common priesthood of the faithful and the ministerial or hierarchical priesthood are nonetheless ordered to one another; each of them in its own proper way shares in the one priesthood of Christ.” (Lumen Gentium #10)

There are so many elements to know and understand about our Faith. Over the years, most notably the past 75 or so, major developments have taken place that have drawn us more deeply into the mystery of the Faith. The Catholic Faith is organic—it grows and develops with every new generation. The Church is ever old and ever new. So many times we find ourselves arguing about or sulking over various components of our Faith. Jesus Christ is the Way, the Truth and the Life. His Gospel and His teaching—found in the Catholic Church—lead us to Him. I’ll see you at Sunday Mass.