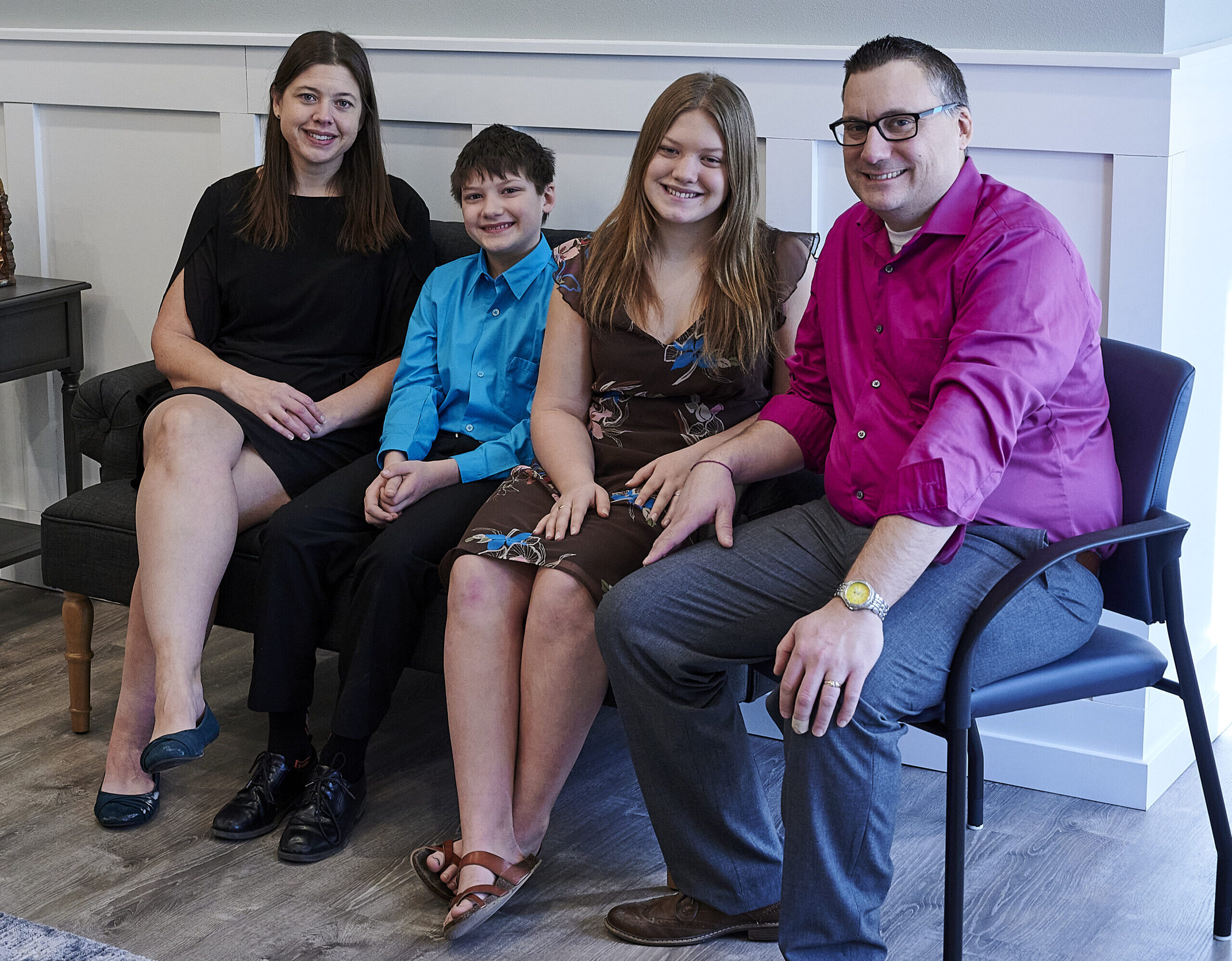 Heather and Dave build a firm foundation on the Catholic Faith

Heather Stein has been a parishioner of St. Joseph Parish in Stratford her entire life. “I grew up on a dairy farm just outside of Stratford,” she says. “My brother and sister and I were baptized at St. Joseph Church and received all of our sacraments there. I remember every Saturday night at 7 p.m. the whole family would go to Mass together. We prayed before every meal and at bedtime. Our Faith was an important part of our upbringing.” Pausing, she adds thoughtfully, “Being Catholic has been a constant in my life from the very beginning.”

Her husband David says his experience of growing up Catholic was the complete opposite. “I also have a brother and sister, but our family would only go to church occasionally,” he says. “We were all baptized and confirmed, but we didn’t really go to church all that much. It just wasn’t something that we did.” That changed when he met Heather.

The couple, who have been married for 15 years, met when they both worked part-time at Shopko. “We were so young when we met,” Heather says with a laugh. “I was just finishing my senior year in high school, and Dave was in college.” They began to date and continued to do so when Heather went away for college. “I’d come home on the weekends and want to go to Mass with my family. Doing that was always very important to me,” she says. “It became kind of an unspoken decision between Dave and me that he would come to church every week with me and my family.”

“At first I went to church to spend time with Heather,” David admits. “But after a while, I really began to enjoy it, and I started going on a regular basis. I am grateful that I was able to attend Mass with Heather and her family while we were dating. Had it not been for her, I probably would not be the Catholic that I am today.”

Heather explains, “I don’t think I ever thought about it from the standpoint of what religion my future husband would be, but it was definitely important that he would be strong in his faith and his belief in God. I knew that if I ever had children someday, I would want to raise them Catholic.”

After a few years of dating, David and Heather got engaged and then married after she graduated from college. Two years later, they became parents. “I always joke that when Dave and I were going through our pre-marriage classes, he said he wanted kids, and I said I wanted horses and a dog,” Heather laughs. “Obviously, he won that battle!” Their first-born child, Madelyn, is now 13, and their son, Michael, is a year younger. “We added some wonderful pets through the years, and our family was complete,” Heather says.

Being Catholic has been a constant in my life from the very beginning.” – Heather

Heather and David knew they wanted to create a strong Faith foundation for their children from the time they were born. “We began praying with them right away, when they were still in the crib,” Heather says. “We would pray together as a family every night before their bedtime. As they got older, the list of who we prayed for became longer and longer. I think they added every family member and every pet we ever had!” Heather doesn’t remember exactly how old Madelyn and Michael were when they began praying at bedtime by themselves, but she definitely remembers the feeling she got when she first heard it. “I could hear Madelyn and Michael praying together through their closed bedroom doors. I knew they were in their own individual rooms and wondered how they were praying together,” she says. “The next morning, they told me they laid on the floor in their bedrooms in front of a heat register that connected the two rooms, so they could look at each other through the open space and pray together.” Heather pauses, emotion filling her voice. “That melted my heart.”

Heather says she and David brought the kids with them to Mass every week, even when they were very young. “I’ll admit, bringing our rambunctious toddlers to church made me pretty anxious,” Heather shares. “I was always worried that they would disrupt everyone around us.” But she believes it was an important thing to do. “We had plenty of embarrassing moments at church with our kids when they were really young, so I understand the mortification parents may feel if their child is noisy at an inappropriate time. But I want to encourage new parents to do it anyway—it’s not as bad as you think. Just embrace it, and let your kids grow and be part of Mass each week, even if you think it’s too much or too loud. It will become a time that the whole family will treasure.”

Now that their children are approaching their teenage years, Heather and David are experiencing different types of joys and challenges as parents. “It’s great to see how they grow and progress,” David says. “The kids are at an age now where we can go out and have fun and hang out with them and, at the same time, still be their parents.” Heather agrees. “We love being involved in all the things they do and experience,” she says. “Madelyn plays volleyball, basketball and runs track. She’s also a member of 4-H and raises pigs with my dad. Michael is into football, baseball and archery. In fact, he qualified at nationals last year in archery, so we had an unexpected vacation to Myrtle Beach to watch him shoot at the championships.”

I hope the kids are able to continue on in their Faith and continue to be a part of the Church.” – David

Heather believes the challenge of raising teens is two-fold. “One is knowing what they are exposed to in this world and making sure we tell them enough to keep them safe, but at the same time not ruining their innocence,” she says. “Kids are so impressionable at that age.” David agrees. “It can be challenging to make sure they know what’s right and wrong and what’s OK and not OK,” he says. “Different people have different ideas of what is considered right and wrong. What’s right for one person, may be wrong for another and I struggle with trying to explain this to them.”

“The other challenge is that kids don’t come with an owner’s manual!” Heather continues. “As parents, we sometimes make mistakes. We’re human. All we can do is apologize and move on. But even those mistakes can turn into learning moments.”

Heather and David feel it’s important to provide their children with a Catholic education. “We wanted to make sure the kids had a strong foundation to start their Faith on,” Heather says. “I think you have a better appreciation for the Catholic Faith when you attend a Catholic school. At St. Joseph Grade School, Madelyn and Michael get to participate in extracurricular activities like sports or band, with the added benefits of smaller classrooms and more one-on-one attention from their teachers, all the while building a strong Faith formation.”

Heather and David are also grateful that their family is very involved in their parish community. “We believe in the importance of acts of service,” Heather says. Madelyn and Michael are altar servers and sing in the choir. David ushers at Mass and helps lead the parish’s annual appeal. Heather teaches Sunday school and CCD. “Our church is part of our family,” Heather says. “You do what you can to support your family. If there is a need, our church family rallies together and everyone does what they can to help.”

Heather says doing acts of service can be instilled into different activities with their children. One example is taking holy Communion to shut-ins. “We took Communion and visited with the same gentleman, off and on, for three years before he passed away,” Heather says. “Madelyn and Michael were asked to be servers at his funeral Mass. That was very rewarding—and challenging—for them. They were sad he died but grateful to have built a relationship with him.”

The family also enjoys visiting nursing homes and assisted living facilities. “It’s rewarding to see our kids understand that perhaps the people they are visiting don’t have anyone else to visit them. To see Madelyn and Michael talking and interacting with the residents, sometimes exchanging hugs with them, is so special,” Heather says. “It’s rewarding for the kids and also rewarding for Dave and I to see as parents.”As committed Catholic parents, David and Heather have great hopes for their children’s futures. “I hope the kids are able to continue on in their Faith and continue to be a part of the Church,” David shares. “As they get older, I hope they do not lose sight of where they came from, and they retain the values they have learned from us and the Church.”

Heather agrees. “It may sound trite, but I just want them to be good people,” she says. “Someone will always have something better or be better at doing something. I just want our kids to stay true to themselves and not feel that they have to go along with the crowd. I want them to go out of their way to be nice to people and include everyone.”

Heather says her Faith has always been a calming presence throughout her life, and she tries to instill that feeling in her children. “Dave and I always tell our kids, ‘Let go and let God.’ If they struggle to sleep at night or are scared or worried about something, we tell them to talk to God and put their burdens on Him,” she says. “I’ve always had such a comfortable relationship with God. I can only hope that as parents, we’re giving our children a strong foundation so they will always feel that way, too.”