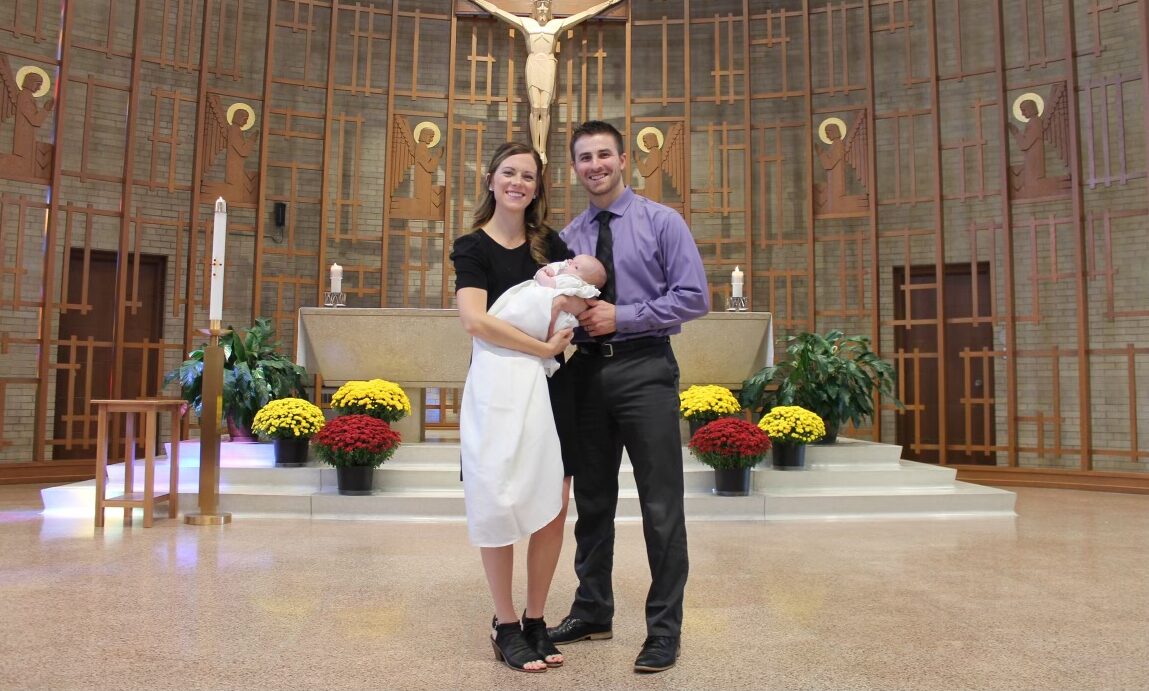 “Never go to bed angry. Make sure you spend time together. Make sure you pray together.” Newlyweds hear these adages time and time again and, while they seem trivial, they hold wisdom. Derek and Faythe Weinmann have taken these words to heart. Having been married just shy of two years, they are learning what a sacramental marriage looks like. Hand in hand, they are walking their journey of Faith, with the hope of together reaching their heavenly reward.

The Weinmanns are a young, vibrant couple whose joy and love for one another is apparent. “We met at Howie’s in La Crosse,” said Derek. “I worked there as a bartender in college, and I met her through a mutual friend. I actually wrote my number on her receipt.” Faythe added, “But I didn’t see it, and I added him on Facebook later!” Derek joked, “So I guess you could say that it didn’t even work for me.” Faythe concludes, “I never wanted to meet ‘the one’ at a bar, but that’s our story.” The two’s mannerisms complement each other and allow for easy conversation. After dating for two years, they got engaged and were married in the summer of 2020.

Thinking back on their courtship, Faythe recalls many a discussion about how serious they wanted to be and how important her relationship with God is to her. Derek says, “I think she was so much farther in her Faith journey than I was at the time. I was a practicing Catholic, but I was still getting back into it after some time away. It was a work in progress for me, where her Faith was the center of her life already.” Faythe adds, “You’ll find what works for you as a couple in different seasons of your life, like now it looks different for us to pray together than when we were dating. And as much as Derek was at a different spot in his Faith life when we met, he sure has pushed me in my Faith now and I often look at him and realize I need to step up my game!” Since they know that the seasons of their lives will change often, they have sought advice from older couples along the way. These words of wisdom have been an important part of their growth as a couple, and their goal is to take every word of advice to heart.

“Faythe does a wonderful job asking older couples what the secret to a happy marriage is. We’ve heard so many tips up to this point, but the greatest thing we’ve heard is that you have to put the other person before yourself,” Derek says with a smile. “I never really looked at marriage as dying to self, but it really hit me in marriage preparation that marriage is a daily dying to self. Especially in times when we may be having a disagreement. I step back and ask myself, ‘Is what I’m doing for the good of the other?’ It helps me see things better.” Faythe looked at Derek and said, “But that’s the beauty of marriage; it teaches you not to be selfish. We are the happiest when we pray together daily, but someone told me once that your marriage will only be as good as your relationship is with God. I think when we’re both right with God, it radiates into our marriage.”

“When I think of marriage as a sacrament, I think of how I can best serve my spouse,” Faythe reflects. “We are two separate people, so learning how I can show him that I love him, was, and is, something I am always working on. Learning The 5 Love Languages® really helps, but you still have to put that information to use. I’m not always perfect at it, but it is something I am working on. Derek does such a good job of doing things for me; I can see the sacrifice from him every day.” Derek adds, “There’s a difference between how the world views marriage versus how the Church views it; you have to think about how your actions are helping the other person grow in holiness. When you make getting the other person to heaven your goal, it’s just so much easier to let the small things go.” Faythe adds, “But it’s so much more. Marriage isn’t always sacrificing; it’s just so beautiful to share a life you built with someone you love.”

“When we think of how we want our marriage to be,” said Faythe, “we always look to couples with Faith and we’ve been so blessed with parents and grandparents as awesome examples. Every little sacrifice we’ve made daily, has only rewarded us with so much more grace. Our favorite part of marriage by far has been the gift of being parents. We thank God so much for entrusting us with our son. He makes our marriage and life so much better.”

Though they are still newlyweds, Derek and Faythe show their deep love for one another through their commitment to self-sacrifice for the good of the other person. They look forward to living their vocation and growing in holiness. Grace builds upon itself, and there is no telling where His grace will take them through the next chapters of their lives.